'There is a level of mistrust...We should wait and see what the Centre does' 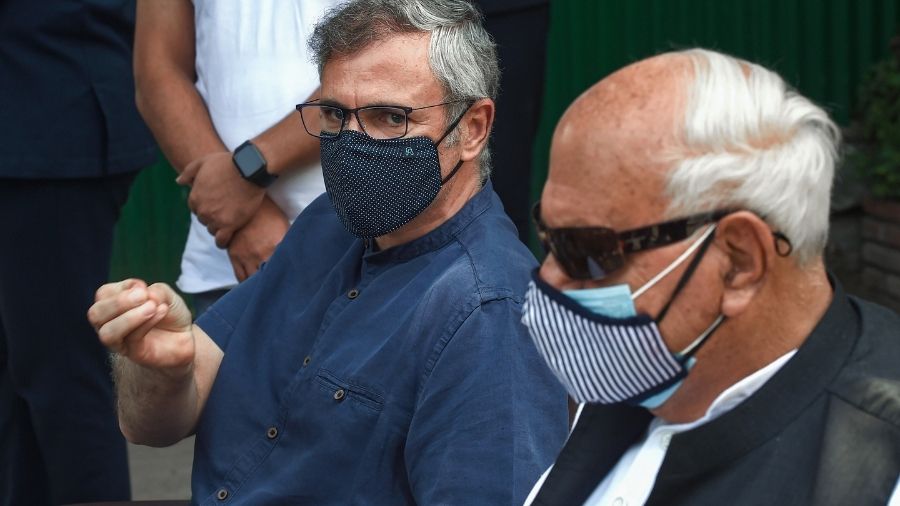 National Conference chief Farooq Abdullah Saturday said there was "a level of mistrust" in Jammu and Kashmir and it was for the Centre to remove it, even as his son and former chief minister Omar Abdullah demanded restoring Jammu and Kashmir's statehood before holding Assembly polls.

Speaking to reporters upon their return from Delhi after attending an all-party meet convened by Prime Minister Narendra Modi on J&K, Farooq said he would hold discussions with his party leaders and PAGD constituents before making any further statement on the meeting.

He said the country's first Prime Minister Jawaharlal Nehru promised plebiscite to the people of J&K but went back on it. He also said that before the 1996 elections, the then prime minister P V Narasimha Rao had promised autonomy to J&K from the floor of the house.

"Narasimha Raoji before elections promised us autonomy and said the sky is the limit, but not independence. We said we never asked (for) independence, we have asked for autonomy. He promised us from the floor of the house. Where is that?" Farooq asked.

"There is a level of mistrust...We should wait and see what they (the Centre) do... Whether they will remove the mistrust or let it continue," he added.

Farooq said even senior Congress leader Karan Singh has called for the restoration of statehood to Jammu and Kashmir before holding elections.

He said that at the prime minister's meeting, all invited persons put forth their views. "This was the first step from their side that somehow the situation is improved in Jammu and Kashmir and a political process is restarted." he said, adding he would speak more on the meeting after consulting party members and PAGD leaders.

The Srinagar Lok Sabha MP dismissed suggestions that the June 24 meeting with the Prime Minister signalled the end of the People's Alliance for Gupkar Declaration (PAGD) -- a Six-party amalgam of mainstream parties formed after the Centre abrogated Article 370 and split Jammu and Kashmir into two union territories in August 2019.

"Why should it be the end of the alliance?"

Omar, meanwhile, told reporters it was made clear to the Centre during the PM's meeting that the statehood should be restored to J&K before holding Assembly polls.

On the process of delimitation, he said the National Conference had authorised its president Farooq Abdullah to take a view as and when the party is approached by the delimitation commission again.

He also dismissed suggestions that the PAGD was weakened after the all-party meeting, saying alliance members said nothing against the spirit of the grouping.

"We maintain that we do not accept the August 2019 decisions and we will continue to fight them legally, democratically and peacefully," he said.

Referring to some leaders refusing to talk about the restoration of Article 370 as the matter was subjudice, Omar said it should not come in the way of discussing the issue.

He said the leaders were invited to the all-party meet at the party level and not as an alliance representative.

The National Conference vice president said they would continue to strive for the restoration of Jammu and Kashmir's special status, irrespective of how long it takes.

"It took 70 years for the BJP to succeed in their agenda of abrogation of Article 370. We won't back off from our mission, even if it takes us 70 weeks or 70 months or more time," he said.

He said the leadership should take steps that provide some respite to the people from "harassment".

"If people are fine with no development till the Supreme Court decides on the petition, we will also raise our hands. A man was jailed for just saying that he was more comfortable with local officers as outside officers do not understand him... We want that we should provide relief to people on these accounts. The two things (providing relief to people and legal process) can go on simultaneously, " he added.