‘We request people not to cook lunch for a day’ 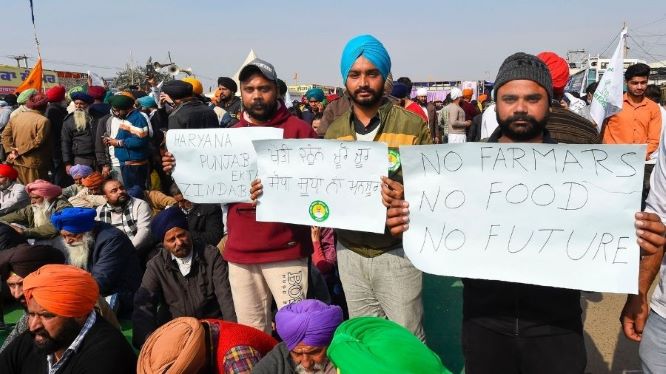 Farmers display placards during their sit-in protests against the three central farm laws at the Singhu border near Delhi, on Sunday.
PTI
Our Bureau, Agencies   |   New Delhi   |   Published 20.12.20, 08:28 PM

Agricultural union leaders on Sunday announced that they will observe a day-long relay hunger strike on Monday at every site of protest as part of their ongoing agitation against the three new farm laws of the Centre.

Farmers will also halt toll collection on Haryana highways from December 25 to 27, the leaders said.

Thousands of farmers, mainly from Punjab and Haryana, are protesting against the laws for the last over four weeks at various border points of Delhi and demanding that the legislations be rolled back.

“Farmers will begin a day-long relay hunger strike on Monday at all sites of protest against the new agri laws. It will be started by a team of 11 members at protests sites here,” Swaraj India chief Yogendra Yadav said during a press conference on Sunday at the Singhu border.

He also appealed to the people demonstrating against the laws across the nation to observe a day-long hunger strike against the Centre’s new agri-marketing laws.

Announcing the next move, farmer leader Jagjeet Singh Dalewala said farmers will halt toll collection on highways in Haryana from December 25 to 27.

Bharatiya Kisan union spokesperson Rakesh Tikait, who was also part of the press conference, said that farmers protesting the new agri laws will celebrate Kisan Diwas on December 23. “We request people to not cook lunch for a day,” he said.

This is not the first time the farmers have decided to observe a fast. Last Monday, farmer leaders had opted for a day-long hunger strike, a movement where Delhi Chief Minister Arvind Kejriwal took part in.

On Sunday, Punjab and Haryana farmers observed “Shadhanjali Divas” to pay homage to their associates who have died while protesting.

Meanwhile, Union Home Minister Amit Shah, who is on a two-day visit to Bengal, said at a press conference that Agricultural Minister Narendra Singh Tomar may talk to the farmers in a day or two.

“I am not exactly aware of the timing but Tomar is likely to meet the representatives of farmers tomorrow or the day after to discuss their demands,” he told reporters at Bengal’s Bolpur.

Several rounds of talks with farmers' representatives have failed to break the deadlock between them and the Centre.

While the farmers want a complete repeal of the three laws, The government on Thursday refused to assure the Supreme Court that it would not implement the three new farm laws till the bench had heard all the parties, setting up an exchange on who was being adamant.

A bench, headed by Chief Justice S.A. Bobde made it clear it would not “interfere with the protest” and that “at this stage the farmers’ protest should be allowed to continue without impediment”.

It, however, stressed that while the entire country sympathised with the farmers, the protests should be non-violent and not cause any inconvenience to the public.