Farmers threaten to burn effigies of Ambani and Adani 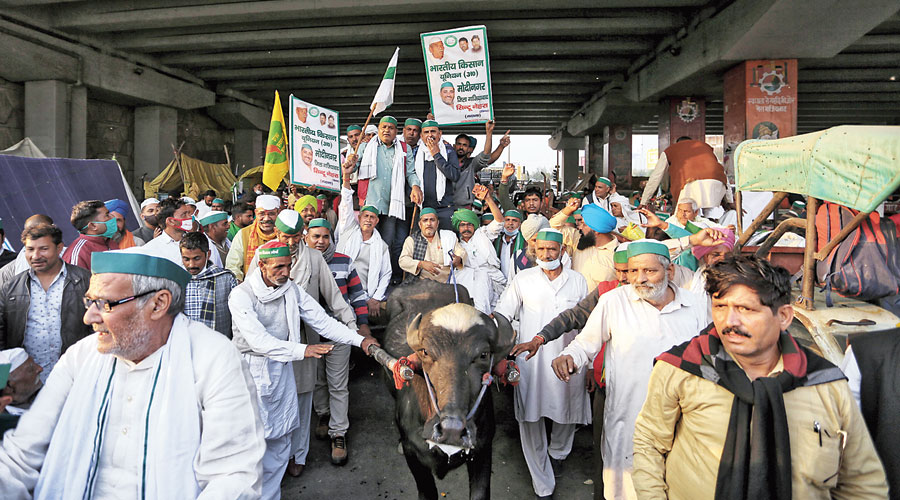 Farmers' groups on Thursday met three Union ministers for the fourth round of talks amid the ongoing protest seeking repeal of the new farm laws. Union Agriculture Minister Narendra Singh Tomar, Railways, Commerce and Food Minister Piyush Goyal and Minister of State for Commerce Som Parkash, who is an MP from Punjab, are holding talks with the representatives of 35 farmers' unions at the Vigyan Bhawan in the national capital. The government said that the meeting started in the afternoon and discussions are being held in a cordial atmosphere. With no let up in the farmers protest against the Centre's new farm laws, the Delhi Police today intensified its security arrangements and suggested alternative routes to commuters entering or exiting the city. A crucial round of talks between the Centre and the representatives of protesting farmers is scheduled to be held later in the day. In a series of tweets, the Delhi Traffic Police on Thursday alerted commuters about the closure of Singhu, Lampur, Auchandi, Chilla and other borders in view of the farmers protest. It, however, said those wanting to travel to Haryana can take Dhansa, Daurala, Kapashera, Rajokri NH 8, Bijwasan/Bajghera, Palam Vihar and Dundahera borders. "Singhu border is still closed from both sides. Lampur, Auchandi & other small borders also closed. Please take alternative routes. Traffic has been diverted from Mukarba Chowk & GTK Road," the city traffic police tweeted. It also advised commuters to avoid Noida Link road and instead use NH 24 and DND as the Chilla border on Noida Link road remained closed for traffic. "Tikri, Jharoda Borders are closed for any Traffic Movement. Badusarai Border is open only for Light Motor Vehicle like Cars and two wheelers. Jhatikara Border is open only for two wheeler traffic," it said in another tweet.
Picture by Prem Singh
Our Special Correspondent, Agencies   |   New Delhi   |   Published 03.12.20, 03:54 AM

Farmers protesting at Delhi’s borders have dug in their heels, iterating on Wednesday that they would not relent till the farm laws are repealed and extending their protest against the Narendra Modi government to the corporate houses who they believe these laws will serve.

If the laws are not rolled back immediately, effigies of the Modi government, Ambani and Adani would be burnt in villages across the country on Saturday, the farmer leaders announced a day before the next round of talks with the agriculture minister.

Late on Wednesday, home minister Amit Shah invited Punjab chief minister Amarinder Singh for a meeting on Thursday morning to discuss the farmers’ issue. The farmers’ meeting with the government is scheduled later in the day.

The farmers, under the banner of the Samyukt Kisan Morcha Coordination Committee, wrote to agriculture minister Narendra Singh Tomar on Wednesday demanding that Parliament be convened immediately to repeal the three farm laws.

The letter said that thousands, including the elderly, have for the past seven days been sitting on the highway in the harsh winter and that three farmers have died. It would be inhuman of the government to not address the farmers’ legitimate demands immediately, the letter added.

The All India Motor Transport Congress, the apex body of transporters representing about 95 lakh truckers, rallied behind the farmers and threatened to halt operations in north India from December 8 if the government fails to address their concerns. If the issue is prolonged by the government, the transporters may go for a nationwide shutdown of operations, the AIMTC said on Wednesday.

The farmers’ letter to Tomar also said: “We ask the government not to indulge in any divisive agendas with regard to the farmers’ movement which is united…. This was clear from the meeting proceedings yesterday.”

On Tuesday, the Punjab farmers’ unions had rebuffed the attempt to reach out only to them, forcing the government to meet the leaderships of three all-India collectives. But after that the government met the Bharatiya Kisan Union, based mainly in western Uttar Pradesh and led by Rakesh Tikait, late in the night separately.

The farmers in their letter asked the government not to hold separate meetings.

Darshan Pal, president of the Krantikari Kisan Union, said at the Delhi-Haryana Singhu border after a meeting of the farmers’ collectives in the afternoon that they had decided to move forward under the banner of the Samyukta Kisan Morcha and that Tikait too was with them now.

The letter once again rejected the government’s offer to set up an expert panel on the farm laws, saying it reflected “lack of sincerity”.

Pal added: “The government can keep us engaged in discussions for days on end but the protests on the streets will continue and intensify.”

The entry points into Delhi from Haryana at Tikri and Singhu and from Uttar Pradesh at Noida are already barricaded, disrupting travel in the national capital region.

Pal also thanked the sportspersons and ex-servicemen who have expressed solidarity with the farmers and announced plans to return their medals.

Responding to media queries earlier in the day, agriculture minister Tomar had said: “I appeal to the farmers that the laws are in their interest and the reforms have been done after a long wait but if they have any objection, we are ready to address their concerns.”

The government claims the new laws will benefit farmers, but the tens of thousands of farmers camped out at Delhi’s borders argue that this is a reform they never sought and do not want.

If effigies are burnt in the country’s villages on Saturday, it will be a repeat of what had played out on Dussehra in villages across Punjab, where the protests have been on since the three farm laws were forced through Parliament in September.

The laws are aimed at linking potential bulk buyers, such as WalMart Inc, Reliance Industries Ltd and Adani Enterprises Ltd, directly to the farmers, bypassing government-regulated wholesale markets and layers of commission agents.

The farmers see the laws as an attempt to privatise agriculture, eliminate the agents who are a vital cog of the farm economy, deny them a guaranteed price for their grains and leave them at the mercy of the oligarchs. They worry that after initially paying good returns for their produce, corporate buyers would force down prices.

The protesters said a similar move in Bihar had left farmers in the state worse off than before. “Some landholders from Bihar now work on our farms,” said 45-year-old Sukhbinder Singh, who grows wheat, potatoes and mustard on his 20-acre farm in Haryana. “If we don’t protest now, the next generation will curse us for not fighting the fight.”