Minimum support price issue expected to be discussed at length 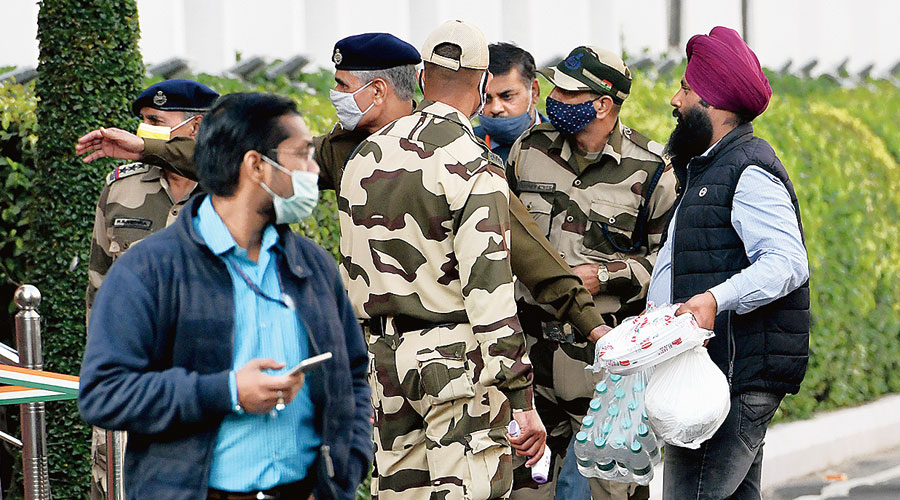 Farmers’ leaders refused the lunch offered by the government during their fourth round of talks on Thursday and stuck to their demand for repeal of the three new farm laws, rejecting offers of amendments.

According to the farmers’ organisations, the three ministers at the talks conceded the merit of some of their concerns and offered to tweak the laws, but the leaders of the 40 farmers’ unions and collectives unanimously dismissed the amendment route.

“We told the government that cosmetic changes will not help,” All India Kisan Sabha general secretary Hannan Mollah said.

The farmers’ unions were, however, appreciative of the time the three ministers gave them on Thursday. The talks, which lasted well beyond six hours, ended with a decision to meet again at 2pm on Saturday.

Among the amendments the government suggested, sources said, were:

On the issue of a minimum support price (MSP), Rakesh Tikait of the Bharatiya Kisan Union appeared satisfied with a purported promise that no change is being envisaged for the time being. But the other union leaders said the government had given no assurance about a legally guaranteed MSP. This is expected to be discussed at length on Saturday.

ANI quoted Harjinder Singh Tanda of the Azaad Kisan Sangharsh Committee as saying: “In the half-time, it seemed that today’s meeting will yield no result, in the second half it seemed that there is pressure of farmers’ agitation on government. Talks were held in a conducive atmosphere.”

Agriculture minister Narendra Singh Tomar was accompanied at the meeting by food minister Piyush Goyal and the minister of state for commerce, Som Prakash. Goyal has been holding the food ministry, which deals with procurement and the MSP, since the death of Ram Vilas Paswan in October.

Tomar told reporters the government would not be constrained by ego while talking to the farmers, and that it was willing to address their fears.

He was confident that the talks would enter a decisive stage on Saturday and urged the farmers to call off their siege of Delhi, saying it was inconveniencing people.

This was the fourth meeting between the farmers and the government since the farm laws had been enacted in September. In the first two instances, the government met only farmers’ unions from Punjab, which were at the forefront of the agitation.

But since farmers from five north Indian states converged on Delhi's borders in response to the All India Kisan Sangharsh Coordination Committee’s “Dilli Chalo” call for November 26 and 27, they insisted and got the government to invite their national-level collectives.

The farmers refused government hospitality during the talks at Vigyan Bhavan. Lunch was brought for them from the nearby Gurdwara Bangla Sahib, and they ate standing or sitting on the floor in the dining area of Vigyan Bhavan. Tea too was brought from outside for them.

“We cannot be sitting down for a sumptuous meal offered by the government when our farming community is out on the street,” a farmer leader explained.

The farmers’ feistiness seems to be endearing them to the citizenry at large. The protest music being played at their camps along the Delhi-Haryana border, and the Punjabi language they are speaking, are fast becoming the flavour of the season.

Thousands of farmers from Uttar Pradesh have blocked National Highway 9 near UP Gate, while thousands from Punjab and Haryana are massed at other points on Delhi’s borders, PTI reported.