Rahul Gandhi, Arvind Kejriwal, leaders of Left and Trinamul turn up for meeting 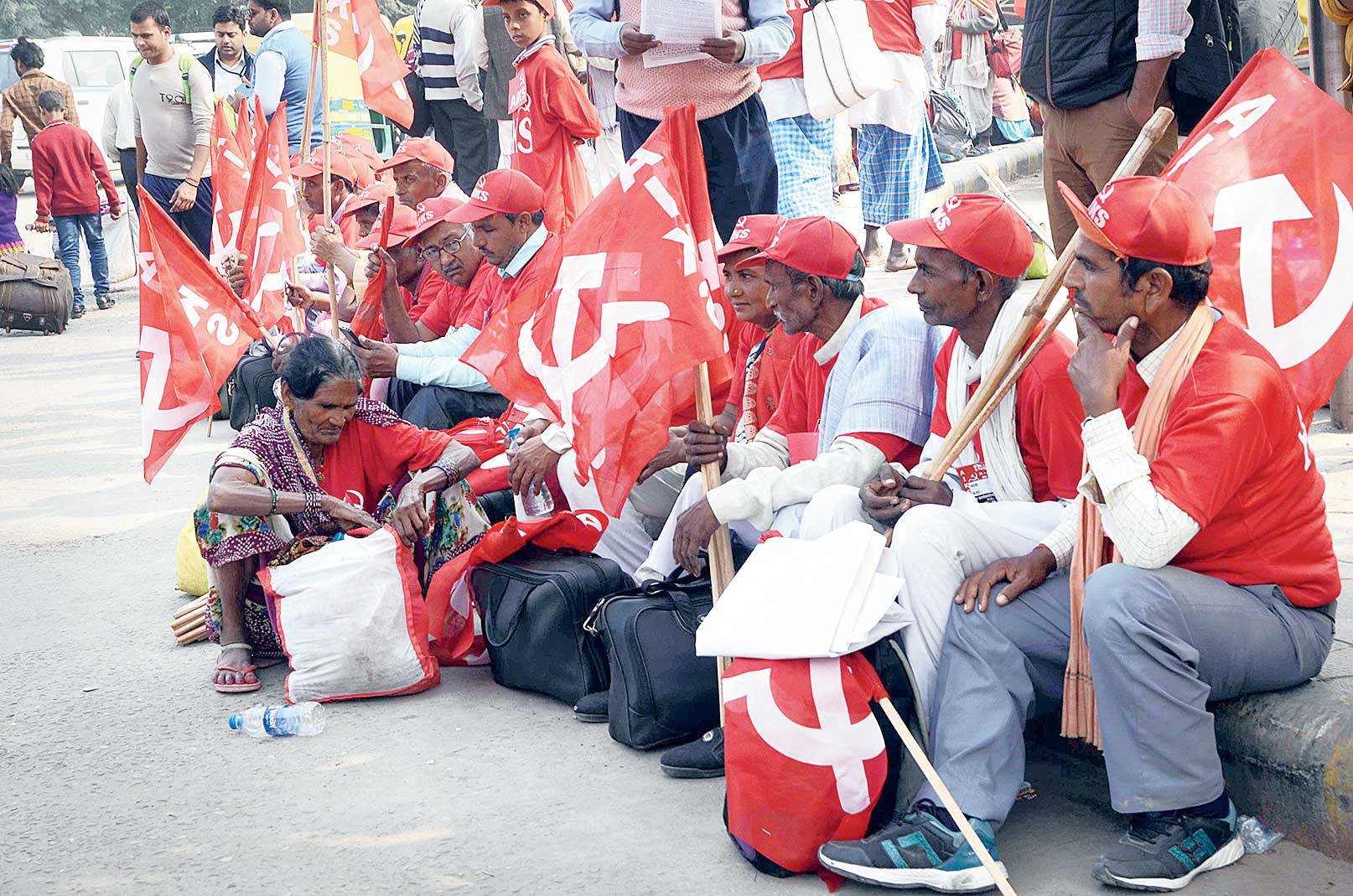 The farmers’ march, which ended on Friday evening without yielding anything concrete for the protesting agriculturists, became a stage for Opposition leaders to band together in the capital and criticise the BJP in the election season.

The march, under the banner Nation for Farmers, by the All India Kisan Sangharsh Coordination Committee started on Friday morning from the Ramlila Grounds and culminated on Parliament Street.

No government minister or BJP leader was seen at the event.

The leaders raised the charges of crony capitalism, the fanning of communal tension and the perceived lack of empathy for farmers against the government.

Vijoo Krishnan, the joint secretary of the All-India Kisan Sabha (AIKS), which is Left-backed, said that the outfit had approached several political parties asking them to participate in the march. 'We had approached the parties that had extended support for a special session (of Parliament),' he said. 'We didn't announce that because their participation was not confirmed. Some (leaders) who had confirmed, such as like (H.D.) Deve Gowda and Ajit Singh couldn't make it.'

Krishnan said the outfit was not sure if Kejriwal and Rahul would turn up, but they did. Leaders from the Left were expected to attend, he said.

The All India Kisan Sangharsh Co-ordination Committee, an umbrella organisation of 200 farmers’ outfits and the mover behind the march, wanted a special, 21-day joint session of Parliament, dedicated entirely to discussing the agrarian crisis. The organisation also wanted to draw attention to two bills – the Farmers’ Freedom from Indebtedness Bill, 2018, and the Farmers’ Right to Guaranteed Remunerative Minimum Support Prices for Agricultural Commodities Bill, 2018.

When Rahul reached Parliament Street on Friday afternoon, some farmers rushed forward for a closer look.

In the last four-and-a-half years, the Narendra Modi government had waived Rs 3.5 lakh crore in loans owed by 15 richest people in the country, and now they plan to waive a Rs12.5 lakh-crore debt which Modiji and Jaitleyji call Non Performing Assets, the Congress chief said.

Kejriwal called the crop insurance policy brought by the government a fraud. 'When a farmer's crop fails they put a condition saying a farmer won't get a compensation until 70 per cent of the crop is proved to be damaged,' he said. 'Yeh beema yojna nahin hai, yeh Bharatiya Janata Party ki kisan daaka yojna hai (this isn't an insurance policy, this is the BJP's policy to loot farmers).'

Both Rahul and Kejriwal pointed to what they called the BJP government’s “concern” for Ambani-Adani.

Pointing to the Parliament Street police station to his left, Yechury reminded the crowd that it was the same place that Bhagat Singh was taken to after he threw a bomb in Parliament to wake up the deaf British government. 'We are saying the same to independent India's government. There will be a louder bang than a bomb. That will be through votes, ' Yechury warned.

'They (the government) have only one brahmastra. To bring in the name of Ram. Every five years they do the same thing to polarise society. We need to protect this country from these forces,' the CPM general secretary said.

Senior NCP leader Sharad Pawar said the current government lacked empathy for farmers. 'This government is not ready to give the right price for your crops. They are not willing to reduce the price of electricity or fertilisers. We need to send a message to this government that it is enough,' Pawar said.