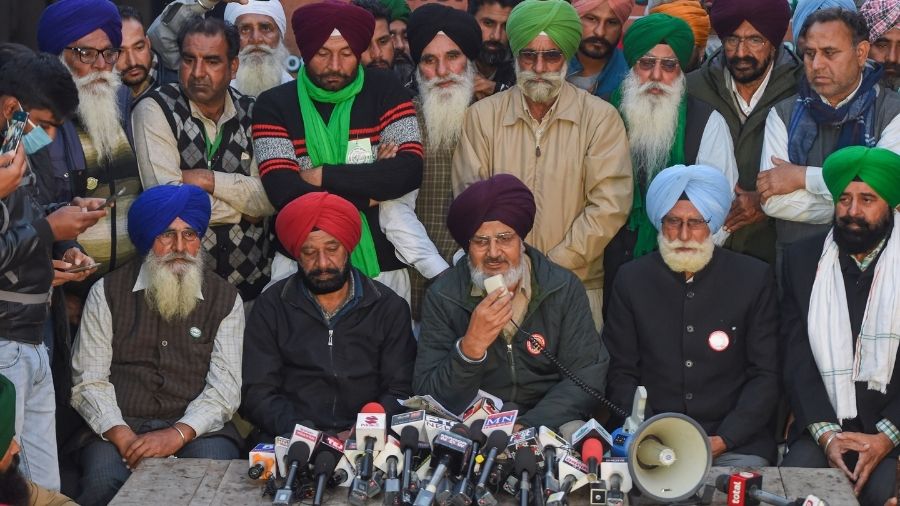 Farmer unions on Tuesday said they will make a decision regarding holding talks with the Centre on Wednesday, while agriculture minister Narendra Singh Tomar remained hopeful of a discussion soon.

As the farmers’ protest against the three agri laws entered its 27th day, union leader Kulwant Singh Sandhu said that 32 farmer organisations from Punjab held a meeting and discussed the next course of action.

Addressing a press conference, he said the decision regarding talking to the Centre will be taken on Wednesday when farmer leaders from across the country will discuss the agenda.

Sandhu said that they would also write to Britain MPs, urging them to press their Prime Minister Boris Johnson not to attend India's Republic Day celebrations on January 26.

Union Agricultural Ministry Joint Secretary Vivek Aggarwal on Sunday had written a letter to 40 farmer unions, asked protesting leaders to specify their concerns over its earlier proposal of amendments in the laws and choose a convenient date for the next round of talks so that the ongoing agitation could end at the earliest.

Meanwhile, Tomar said he was hopeful of resuming the talks, the sixth round of which was cancelled on December 9.

“Representatives of different farmers' bodies had come to tell that the laws are good and are in the interest of farmers. They had come to urge the government not make any amendments to the laws,” Tomar said after meeting two groups supporting the laws.

“I am hopeful they (protesting farmers' unions) will soon complete their internal discussions and come forward for talks. We will be able to find a solution successfully,” he said.

UP-based Kisan Sangarsh Samithi (KSS) and Delhi-based Indian Kisan Union (IKU) are among those farmer groups that have extended support to the laws in the last three weeks. The previous groups were from Haryana, Uttarakhand and Uttar Pradesh.

However, nearly 40 protesting farmers’ unions have maintained that the new laws will eliminate the safety net of the minimum support price (MSP), do away with the mandi (wholesale market) system and leave them at the mercy of big corporates. The government has been saying that these apprehensions are misplaced.

Tomar on Tuesday further asserted that the new laws will bring in a fresh era in Indian farming, saying that the agricultural sector is the backbone of the Indian economy.

He was interacting with members of international media from the Foreign Correspondents' Club of South Asia.

“The minister reiterated that reforms have been made in the interest of farmers and will bring about a new era in Indian agriculture. The Government has had many rounds of talks with farmer unions and is willing to continue the dialogue on contentious issues, clause by clause, with an open mind,” an official statement said.

Tomar, along with Food Minister Piyush Goyal and Minister of State for Commerce Som Parkash, has been holding discussions with 40 protesting unions.

Tomar described the Farmers Produce Trade and Commerce (Promotion and Facilitation) Act 2020, Farmers (Empowerment and Protection) Agreement on Price Assurance and Farm Services Act 2020 and the Essential Commodities Amendment Act 2020 as the biggest agricultural reforms in the country so far.