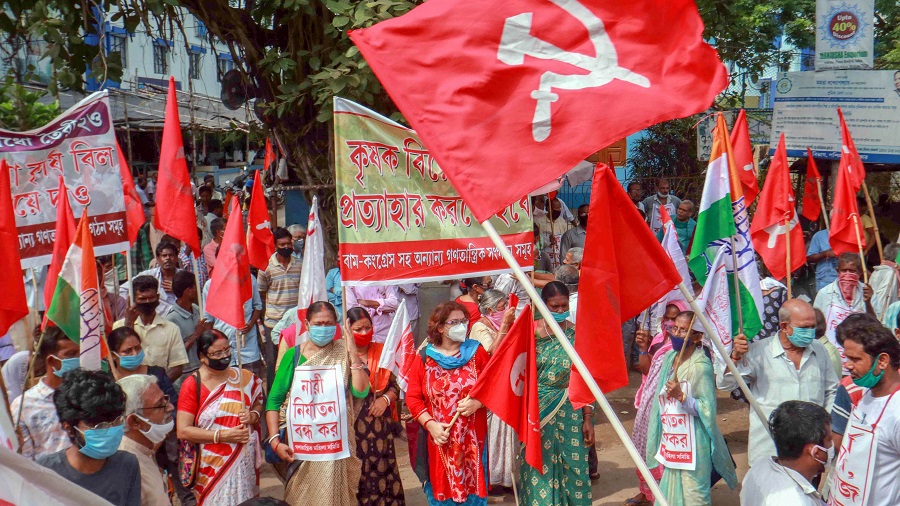 Members of various political parties block Santiniketan road during a protest against the farm bills passed in both the Houses of Parliament recently, at Bolpur in Birbhum district on Friday.
PTI
Our Bureau, Agencies   |   Chandigarh   |   Published 25.09.20, 02:20 PM

Farmers on Friday began their protest as part of the 'Punjab Bandh' call against the contentious farm bills that were recently passed in the Parliament.

As many as 31 farmer organisations, under the aegis of the Bharatiya Kisan Union (BKU) have joined hands for the complete shutdown of Punjab.

Several organisations in Haryana, including the BKU, have also extended support to the nationwide strike called by some farmers' bodies against the bills.

Police personnel in adequate strength were deployed across the state to maintain law and order, officials said.

While the ruling Congress and the AAP have extended support to the farmers' protest, the Shiromani Akali Dal has announced to hold road blockades.

Farmers at several places in the state started gathering at roads for stopping the movement of traffic.

Women protesters under the banner of the Kisan Mazdoor Sangharsh Committee in Amritsar took out a protest march.

Shops and commercial establishments at many places in Punjab remained shut on Friday morning in the wake of farmers' stir.

Shopkeepers had been appealed to keep their shops shut in support of farmers.

Krantikari Kisan Union president Darshan Pal said farmers would hold protests at over 150 places across the state adding that they were getting support from traders, transporters and taxi operators among others.

Farmers on Thursday had started a three-day rail blockade against the bills and squatted on tracks at many places in the state.

Punjab Chief Minister Amarinder Singh had said on Thursday the state government was fully with the farmers in their fight against the bills and no FIRs would be registered for violation of Section 144, which bars assembly of more than four people.

The protesters have expressed apprehension that the Centre's farm reforms would pave the way for dismantling of the minimum support price system and they would be at the "mercy" of big corporates. The farmers said they would continue their fight till the three farm bills were revoked.

The Essential Commodities (Amendment) Bill, the Farmers' Produce Trade and Commerce (Promotion and Facilitation) Bill, and the Farmers (Empowerment and Protection) Agreement of Price Assurance and Farm Services Bill were passed by the Parliament earlier this week.

Security beefed up at Delhi borders

The Delhi Police has intensified deployment of its personnel at the border areas in view of a nationwide protest call given by various farmer associations against the agriculture-related bills passed by the Parliament recently, officials said on Friday.

They said police personnel have been deployed in the Chilla area near Delhi-Uttar Pradesh border in the wake of the protest.

Police said adequate arrangements have been made to ensure the situation remains peaceful at the border areas. The situation is under control, according to the Delhi Police.

"Our personnel have been deployed in Delhi-Uttar Pradesh picket borders as a precautionary measure in the wake of a protest call given by farmers in neighbouring states," said a senior police officer.

Voicing support for the Bharat Bandh call given by farmer organisations to protest the farm bills, the Congress on Friday alleged that the new agriculture laws will "enslave" farmers and the MSP will be "snatched away" from them.

Congress leaders Rahul Gandhi and Priyanka Gandhi Vadra spoke out against the farm bills and backed the Bharat Bandh.

Congress general secretary Priyanka Gandhi also hit out at the government, saying the three farm bills brought by it are reminiscent of the "East India Company rule".

The MSP (minimum support price) of the farmers will be "snatched away" and they will be forced to become slaves of billionaires through contract farming, Priyanka Gandhi said in a tweet in Hindi.

`"Neither will they get the price nor respect. Farmers will become labourers in their own land," she alleged.

"BJP's agriculture bills are a reminder of the East India Company rule. We will not allow this injustice to happen," she added, using the hashtag 'Bharat Bandh'.