RSS wing echoes farmers on MSP but not on repeal

As an amendment, the the Swadeshi Jagran Manch has demanded the establishment of 'farmers’ courts on the lines of consumer courts' 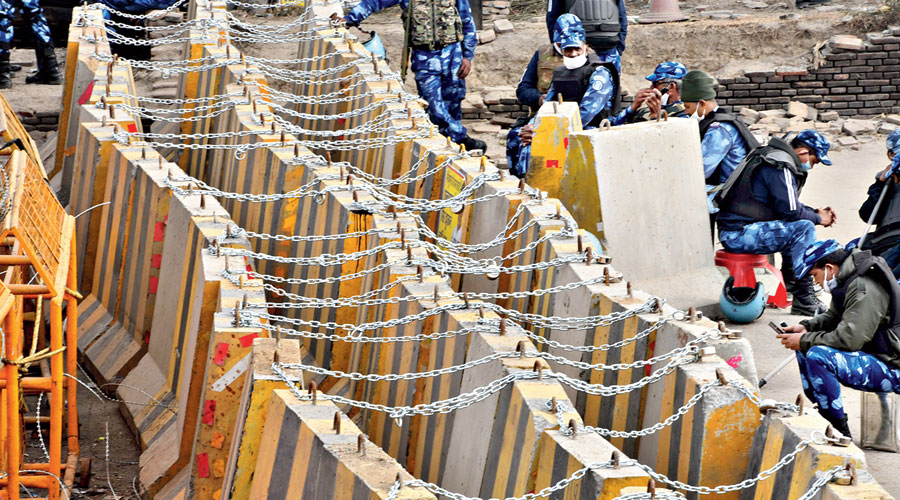 Farmer leaders on Monday started their day-long hunger strike against the Centre's new farm laws and said protests will be held at all district headquarters later in the day, even as more people are expected to join ongoing agitation at Delhi border points. Farmer leader Baldev Singh said, "Representatives of farmer unions have started their hunger strike at Singhu Border." On Sunday, Delhi Chief Minister Arvind Kejriwal said he would also observe a day-long fast on Monday and appealed to the central government to shun ego and scrap the legislations. A large group of farmers on Sunday blocked the key Delhi-Jaipur national highway when it was stopped by police on Haryana-Rajasthan border. As part of the nationwide protest, dharnas will be staged at all district headquarters across the country on Monday. In view of nationwide protest, the Delhi Police has enhanced security at city border points.
Picture by Prem Singh
J.P. Yadav   |   New Delhi   |   Published 14.12.20, 02:59 AM

The economic wing of the RSS on Sunday highlighted flaws in the three new farm laws and sought a legally guaranteed minimum support price, a demand at the core of the farmers’ agitation.

However, the Swadeshi Jagran Manch, which agreed that the new laws would allow big companies to “exploit” farmers, refrained from seeking their repeal and advocated amendments.

In a resolution, it said the “government’s intention” behind the new laws was “good” and that certain amendments would be enough to plug the “drawbacks” and allay the “fears and doubts”.

The protesting farmers are insisting on repeal, rejecting amendments as mere cosmetic.

It explained that the new laws would cause the agricultural produce market committees (APMCs) to lose significance, forcing the farmers to sell outside the old mandi system and making them vulnerable to exploitation by corporate bodies.

The APMC Act ensures that farmers get a minimum support price (MSP) at the mandis (wholesale markets). The agitating farmers have expressed the same fears as the Manch about the new laws’ implication for the mandi system, and demanded a law that guarantees an MSP.

“In such a situation, it would be appropriate that when laws are being made and purchases are being allowed outside the APMC markets, minimum support price is guaranteed to the farmers and purchase(s) below the MSP are declared illegal,” the Manch resolution said.

After talks with farmers’ bodies, the government has agreed to give a written guarantee on the MSP but has not offered to make it legally binding by incorporating it in the law.

The farmers fear that the big companies would be able to violate a mere executive guarantee with impunity.

While praising the government’s intention of providing farmers with more selling options, the Manch resolution underlined that this could lead to their exploitation “in reality”.

“Though it’s good for the farmers to have more options to sell their produce, however, in reality, if one large company or a few companies dominate, the bargaining power of the poor farmers will be badly affected,” the resolution said.

The Manch stressed the need to establish more “mandis” as a shield against domination by big companies, indirectly underscoring the importance of the mandi system.

“The government had earlier said that 22,000 agriculture mandis would be established. This task should be completed on fast-track basis,” the resolution said.

According to the resolution, the Farmers’ Produce Trade and Commerce (Promotion and Facilitation) Act, 2020, defines a “farmer” as a person “who engages in the production of farmers’ produce by himself or by a hired labour”.

“(This) will not be appropriate. Swadeshi Jagran Manch firmly believes that the definition of farmer should include only the farmer who engages himself in farming, not companies,” it said.

Another shortcoming that the resolution highlighted was that the new laws vested non-judicial government officials with the sole power to settle disputes arising out of these laws’ application, bypassing the civil courts.

While legal experts have suggested the provision runs counter to several Supreme Court judgments and is liable to be deemed unconstitutional in a legal challenge, the Manch resolution said the clause made things “very complex for the farmers”.

It said the sub-divisional magistrates, who have a key role in settling disputes, were already overburdened and therefore the farmers would find it difficult to secure justice.

As an amendment, the Manch has demanded the establishment of “farmers’ courts on the lines of consumer courts”.

The Manch had raised some of these issues, including the need for a legally guaranteed MSP, earlier too — soon after the farmers’ protest began.

Now, when the protests have snowballed, the Manch has put its misgivings and demands down in writing.