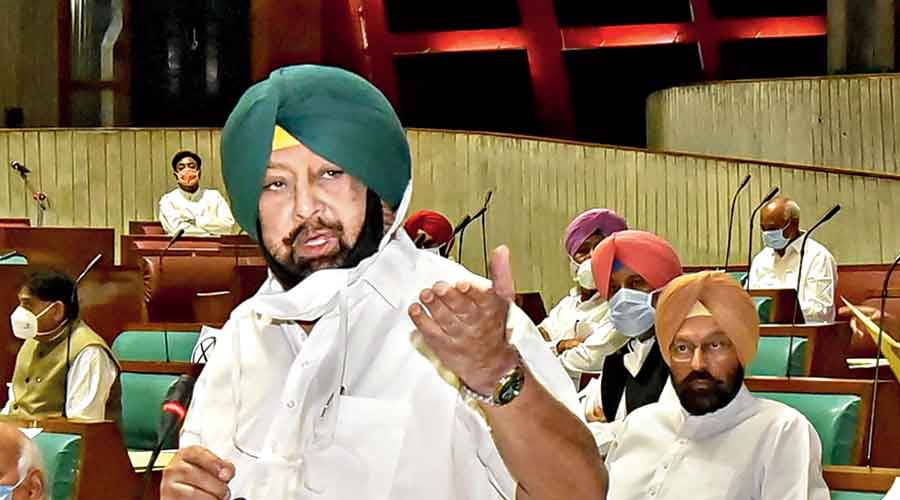 The Punjab Assembly on Tuesday passed three bills to negate the farm laws enacted by the Narendra Modi government and adopted a resolution against them, demonstrating its resolve to fight a political and legal battle with the Centre on an issue that has brought farmers out on the streets and railway tracks.

The bills, adopted unanimously by the 117-member Assembly where the two BJP MLAs were not present, create a safety net for the farmers by making trading below the minimum support price (MSP) punishable by law. Any corporate house or trader who violates the MSP will have to pay a fine and face imprisonment up to three years.

Traders are barred from operating in Punjab without a licence issued by the state government, and the power to fix foodgrain stock limits is vested in the state rather than the Centre.

Chief minister Amarinder Singh, accompanied by MLAs of all parties except the BJP, met governor V.P. Singh Badnore to request him to give his assent to the bills. Anticipating that the governor would refer the bills to the President, Amarinder said he has sought time from Ram Nath Kovind between November 2 and 5 when all the MLAs will go to meet him to press the state’s case.

The chief minister declared he was ready to sacrifice his government but would not bow to the Centre’s “injustice”. “I fail to understand what they are thinking, why are they hell bent on destroying farmers of Punjab, Haryana and western Uttar Pradesh who gave their blood and toil to make India self-reliant in food?” he said.

Farmers in Punjab and Haryana have been at the forefront of countrywide protests against the Centre’s three laws, which the Modi government claims will reform agriculture but which the Opposition contends will enslave farmers and threaten food security.

Farmers have been blocking roads and rail tracks in Punjab since the bills were forced through Parliament last month. Congress leader Rahul Gandhi joined the protests for three days in Punjab earlier this month before going to Haryana.

While the final battle could be fought in the Supreme Court if both the governor and the President refuse assent, Tuesday’s move sets the stage for a political confrontation because the BJP has so far not given any hint of withdrawal. The party has instead launched a massive campaign to hail the Prime Minister for the farm sector “reform”, and BJP-ruled Haryana has dealt with the protesting farmers with an iron hand.

The Congress will earn goodwill among farmers by stepping up to take on the Centre.

Punjab finance minister Manpreet Badal said: “States like Rajasthan, Chhattisgarh and Telangana have consulted us and sought the draft bill. Punjab holds very little land but produces 38 per cent of foodgrain in India. On agriculture, other states look up to Punjab.”

Congress spokesperson and top lawyer Abhishek Manu Singhvi, who drafted the model legislation to override the central laws, hinted that states like Maharashtra and Bengal could also follow suit.

Amarinder warned the Centre against playing with fire as Punjab is a border state and social unrest here would encourage anti-India forces to become active.

The chief minister also requested the farmer unions to lift their blockade as the rail-roko agitation was bleeding Punjab. Foodgrain stocks lying in godowns can be cleared only if train services resume, he said. Industry has already lost Rs 40,000 crore because of the ongoing agitation, Amarinder added.

Asked about the legal validity of the laws passed by Punjab as they are in conflict with the central laws, Singhvi said: “The Centre should thank Punjab for providing them another opportunity to reverse their great blunder. If the President doesn’t give assent to a law ensuring the basic demand of our food providers, they will compound the felony.”

The Opposition parties had petitioned the President not to sign the bills steamrollered by the Modi government through Parliament, but he still went ahead.

Singhvi said: “The Centre passed the laws in hubris. They murdered the federal principle as agriculture is on the state list. They misused a listing about inter-state trade and commerce. We will fight it in court. What was the problem in making the MSP the benchmark?”

Badal added: “States were given constitutional guarantee on GST and that is not being honoured. How can we trust verbal assurances (on MSP)?”

A bill was also passed in the Assembly on Tuesday to bar farmland less than 2.5 acres from attachment proceedings in Punjab.

The finance minister said: “We really don’t understand why Modiji is doing this except for the reason that the Centre does not have money to subsidise the operations of the Food Corporation of India. But if you tinker with food safety, money can’t save you in times of crisis.”