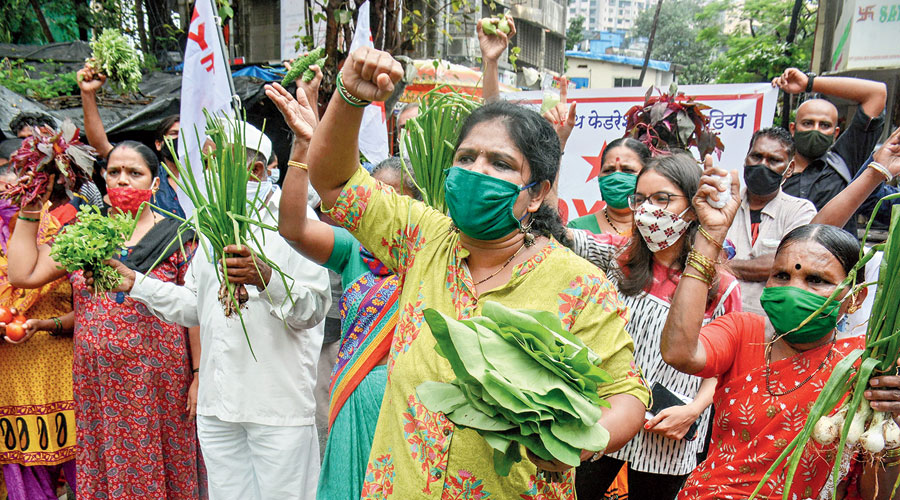 Congress leader Rahul Gandhi said on Friday that the proposed agriculture laws would enslave farmers but expressed hope that they would fight back to free the country from oppression.

The former Congress chief said while interacting with farmers through videoconference: “These bills will have to be opposed for India’s future. Farmers, youths, workers fought for India’s freedom. Today again, the farmers will fight and deliver freedom to India.”

When some farmers referred to “Adani-Ambani” while claiming that big companies would gain from the proposed changes, Rahul said: “East India Company had come then, now it is West India Company.”

Prime Minister Modi and several industrial bigwigs trace their roots to the western part of the country.

The Congress has plunged headlong into the farmers’ agitation. While party leaders held a series of media conferences in major cities for the second consecutive day, MLAs in Punjab organised and took part in protests in both Punjab and Haryana.

No effort was made by the Congress-led Punjab government to prevent farmers from blocking rail tracks and roads. In BJP-ruled Haryana, the administration cracked down on protesters. The Congress has also planned a Twitter campaign using the hashtag “SpeakUpForFarmers” on Saturday.

Rahul told the group of farmers selected from states such as Haryana, Maharashtra, Bihar and Delhi that he wanted to understand what their objections to the bills were. The farmers said the changes would benefit only the big companies and turn them into labourers. They said they did not have the bargaining capacity and clout to deal with big corporate entities and feared that they would be beaten up if they sought justice from them.

One farmer said: “Why don’t they include MSP (minimum support price) in (the proposed) laws if they want to help farmers?”

Another farmer said: “What is the problem in stating in the bill that any transaction done below the MSP will be punishable by law?”

None of the cultivators had any doubt about the ill-effects of the planned changes and insisted that the good work done by previous governments had been watered down by the current regime. The farmers also pointed to the privatisation spree of the Modi government, lamenting that airports and even railways were being handed over to private players.

Rahul had tweeted earlier in the day: “A flawed GST destroyed MSMEs. The new agriculture laws will enslave our farmers.”

The Congress has worked out programmes for the next two months, declaring that the campaign will continue till the bills are withdrawn or a provision to ensure MSP is included in the statute.

Party communications chief Randeep Surjewala recalled how Modi as Gujarat chief minister had demanded statutory backing for MSP and wondered why he had changed his stand after becoming Prime Minister.