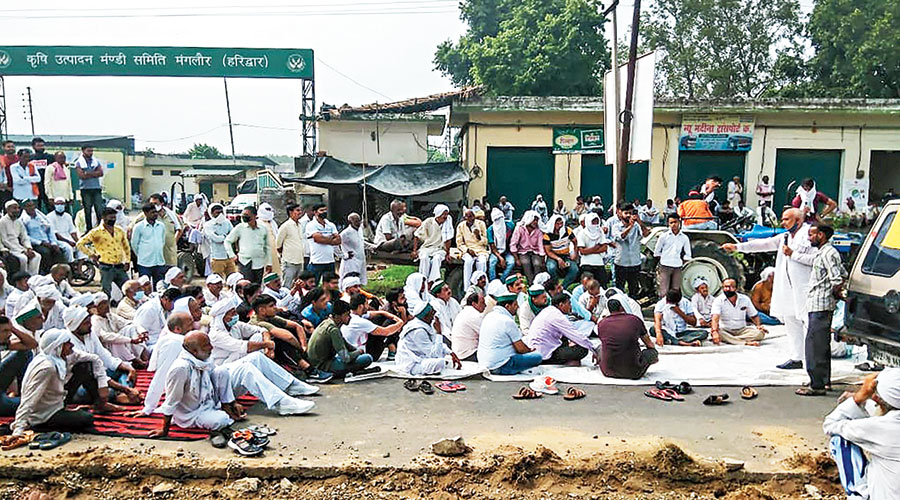 Prime Minister Narendra Modi on Friday asked BJP workers to reach out to farmers and educate them about the advantages of the new farm laws, betraying signs of concern as farmer protests erupted in several parts of the country.

“Each BJP worker should go to the villages and explain to farmers in simplified language the good work the BJP government has done,” Modi said, addressing party colleagues and workers on the birth anniversary of BJP ideologue Deen Dayal Upadhyay.

The Prime Minister did not directly refer to the road and track blockades by the protesting farmers; instead, he accused the Opposition of spreading “lies” and using the farmers for political gain.

“Some people who have always lied to farmers are these days misleading the farmers for political objectives,” Modi said.

He said it was the “biggest duty” of every BJP worker to expose these people before the farmers. “Explain the minute details of the new laws so that nobody can exploit the farmers.”

Road and railway traffic was severely affected on Friday in Punjab, Haryana and some other parts of the country because of the farmers’ agitation, backed by Opposition parties.

The farmers are protesting against two new farm bills that they fear would deny them a minimum support price (MSP) for their produce and place them under the thumb of big companies.

Modi claimed the new laws would give the farmers full rights over their produce and lead them to prosperity. He accused past governments of shackling farmers and labourers with a “complicated web of laws”.

The BJP doesn’t so far seem too worried about the farm laws queering its pitch in poll-bound Bihar. It believes that farmers’ landholdings are so small in Bihar and swathes of Uttar Pradesh that they never bothered about the MSP.

BJP sources explained that most small farmers cannot afford the cost of transporting their produce to the mandis (regulated wholesale markets) where they can claim the MSP, so they sell locally.

Modi sought to underline the point, saying “85 in 100” farmers in the country were “small and marginal”, and the new laws would benefit them.

He told the BJP workers that 85 per cent was a huge proportion and urged party colleagues to unite these farmers against those trying to paint the new laws as “anti-farmer”.

Modi defended the new labour bills too, which provide for large-scale exemption to factories from regulations relating to labour rights, safety and working conditions.

He argued the reforms would transform the lives of the working class while also making things easy for their employers.

“So far, only 30 per cent workers were covered by a minimum wage guarantee. It will now be extended to all workers including those in the unorganised sector,” he said.

Modi urged the BJP workers to educate villagers about his government’s performance in general, highlighting how it had fulfilled most of its big poll promises such as those on Article 370 and the Ram temple.