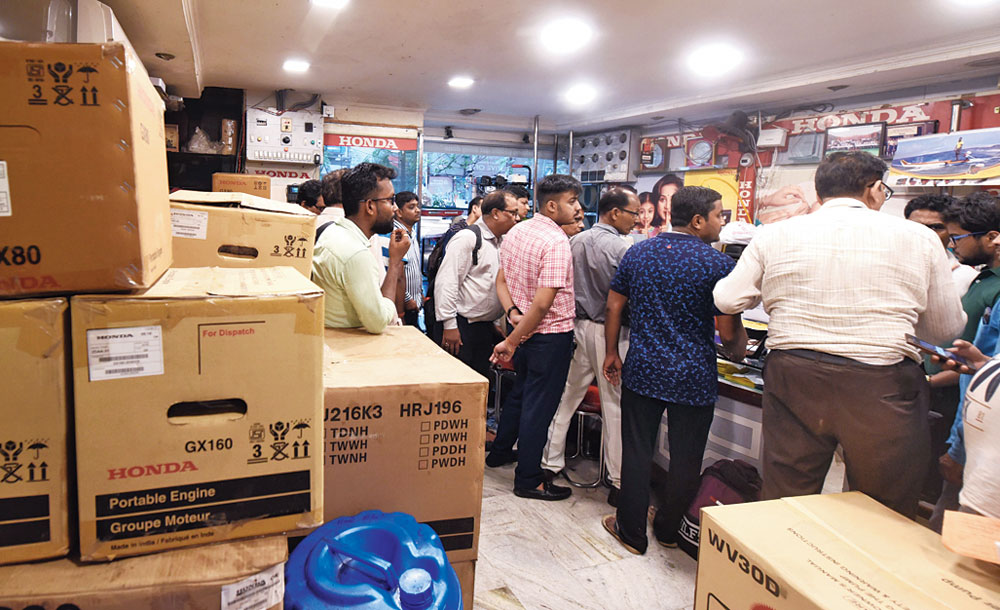 The crowd at a store on GC Avenue on Wednesday afternoon. The same number was waiting outside and almost all of them to buy generator sets
Picture by Pradip Sanyal
Debraj Mitra   |   Calcutta   |   Published 09.05.19, 01:29 AM

A store on Ganesh Chandra Avenue selling portable generators usually closes by 7.30pm. For the past three days, it has remained open till midnight, and is still struggling to meet the demand.

The power crisis in Puri and other places in Odisha that are reeling from the after-effects of Cyclone Fani has triggered a scramble for generators in Calcutta.

As most of Puri and many areas of Bhubaneswar and coastal Odisha remain without electricity five days after Fani, people are coming in droves to Calcutta to buy generators. At Babughat, the Puri-bound buses have their roofs stacked with generators.

The GC Avenue store, an authorised dealer of power products of a Japanese multinational, sells generators, pump sets, lawnmowers and a host of other items.

“For the past three days, we have mostly sold portable generators of various capacities,” said Abhay Pincha, the 53-year-old owner of Hind Electromate. Almost all the buyers are from Odisha, mostly Puri.

At least 10 customers were jostling for space inside the store on Wednesday afternoon, cramped between cartons loaded at one corner and the counter on the other. Another 10 customers stood on the pavement outside, waiting for their turn to enter.

Soumyaranjan Mohapatra, who hails from Puri, was among the customers inside. Mohapatra, a central government employee, is posted in Calcutta. His family — parents, wife and 5-year-old son — live in Pipili, a town 40km from Puri and known for its appliqué handicraft.

“The entire area is without power. The electric poles are submerged in water. There is no water in the tank in my house. I don’t think power will be restored before a month,” said the 30-year-old.

Mohapatra bought a 3kW generator for a little over Rs 85,000. His father’s insulin needs to be stored in a fridge and he said he could not afford to wait any more.

Mohapatra said he would take a bus from Babughat depot to his home on Wednesday evening.

The employees of the central Calcutta store said the rush started on Saturday afternoon. “We are normally closed on Sunday but had to remain open this week. There is hardly any time to eat,” said an employee.

Pincha, the shop owner, said he must have sold around 400 generator sets in three days. “Around 400 people went back empty-handed (because the store had run out of stocks),” he said.

A fresh consignment arrived from a godown at Dhulagarh, Howrah, on Sunday, but all the sets had already been sold by Tuesday night.

Sudhanshu Panda, 37, was not as lucky as Mohapatra. By the time he reached the store on Tuesday night, no stocks were left. He took another chance on Wednesday but it was fruitless.

Panda lives and works in Puri. His house is safe, but there is no power. He has a two-month-old daughter.

“Private companies are charging Rs 2,500 an hour to supply water to each tank for an hour. I thought coming here and buying a generator would cost less,” Panda said.

He was planning a visit to Strand Road, where cheaper Chinese generators are sold.

At Strand Road, which has multiple stores selling generators, the crowd was several times that on GC Avenue on Wednesday.

A couple of van-pullers outside Hind Electromate said that between them, they had made 50 trips to and from the Babughat bus stand every day since the generator rush began.

In Puri, drinking water supply has been particularly affected as pumps can’t be operated without electricity. Essential services such as health care have taken a hit, with investigation equipment not working for lack of electricity and medicines and vaccines facing a preservation crisis. Over 450 electricity towers were damaged by the cyclone, which also uprooted power poles and tore supply lines.