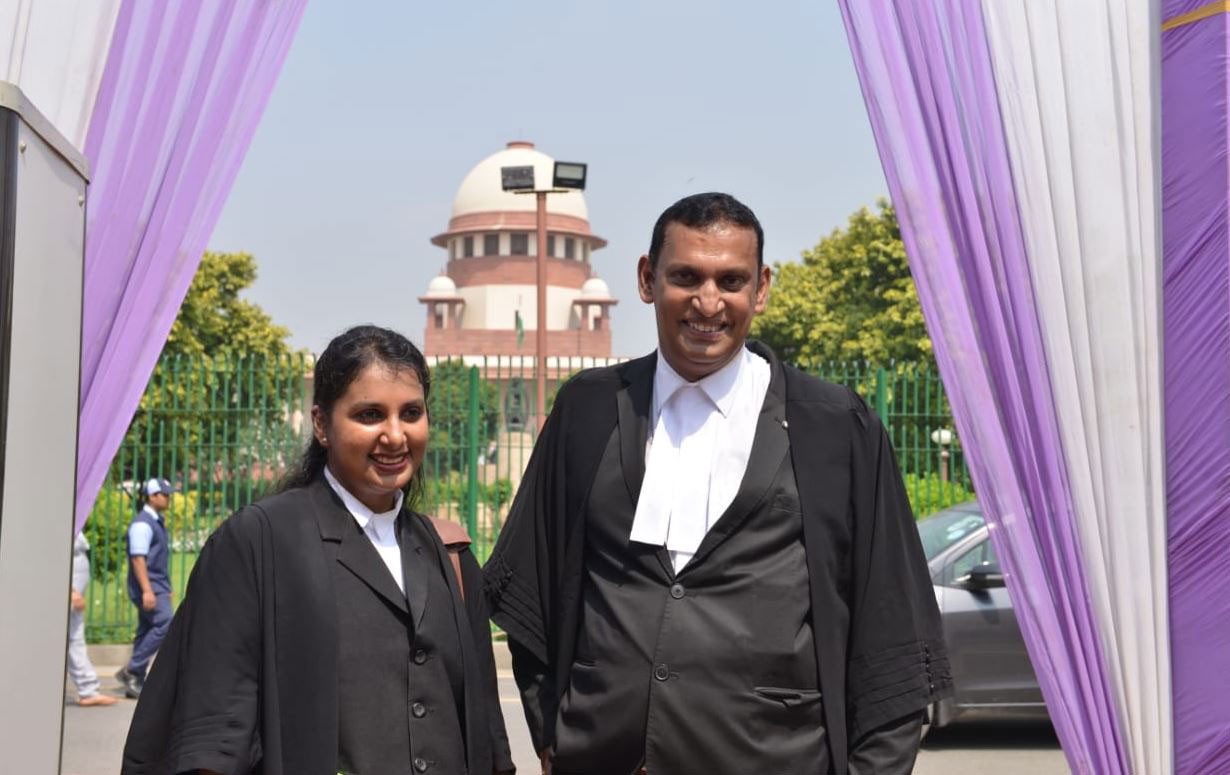 Petitioner lawyers in the adultery case, Kaleeswaram Raj and Thulasi K Raj outside the Supreme Court after the verdict was passed in New Delhi on Thursday.
Prem Singh
R. Balaji   |     |   Published 27.09.18, 09:28 PM

The Supreme Court has decriminalised adultery, striking down a colonial-era law after declaring that it is time to say “husband is not the master” and pressing ahead with a drive for equality that crossed a milestone with the ruling on homosexual relations earlier this month.

The top court emphatically endorsed the right of a woman to explore her own sexuality, asserting that a wife is not a “chattel” of a husband.

Dismissing the Centre’s plea to retain the adultery law, the court said the provisions sought to protect not the sanctity of marriage but the “proprietary right of a husband”.

The five-judge constitution bench made an important observation on privacy, saying that treating adultery as an offence would tantamount to the State entering into a real private realm.

The provisions that have been struck down are Section 497 of the Indian Penal Code, which dealt with adultery, and Section 198(2) of the Criminal Procedure Code that steered prosecution.

The two sections were deemed discriminatory towards both men and women. The bench was unanimous in striking down Section 497, holding it as manifestly arbitrary, archaic and violative of the rights to equality and equal opportunity of women.

The petitioner, Joseph Shine from Kerala, had challenged the two sections on the ground of discrimination.

Not that the court was endorsing adultery. The constitution bench of Chief Justice of India Dipak Misra and Justices R.F. Nariman, A.M. Khanwilkar, D.Y. Chandrachud and Indu Malhotra refrained from interfering with the provisions of the Hindu Marriage Act or other personal laws of other religions, under which adultery is a ground for divorce.

The highest court of the land was unequivocal in its observations. “Any system treating a woman with indignity, inequity and inequality or discrimination invites the wrath of the Constitution. Any provision that might have, few decades back, got the stamp of serene approval may have to meet its epitaph with the efflux of time and growing constitutional precepts and progressive perception. A woman cannot be asked to think as a man or as how the society desires.

“Such a thought is abominable, for it slaughters her core identity. And, it is time to say that a husband is not the master. Equality is the governing parameter,” the court said.

Rejecting the contention of the Centre, the court said: “The ostensible object of Section 497, as pleaded by the State, being to protect and preserve the sanctity of marriage, is not in fact the object of Section 497 at all…. The sanctity of marriage can be utterly destroyed by a married man having sexual intercourse with an unmarried woman or a widow….

“Also, if the husband consents or connives at such sexual intercourse (between his wife and another man), the offence is not committed, thereby showing that it is not sanctity of marriage which is sought to be protected and preserved, but a proprietary right of a husband.”

The bench questioned the deterrent effect of the adultery law. “No deterrent effect has been shown to exist, or ever to have existed, which may be a legitimate consideration for a State enacting criminal law.”

The court illustrated the arbitrary nature of the law. “Manifest arbitrariness is writ large even in cases where the offender happens to be a married woman whose marriage has broken down, as a result of which she no longer cohabits with her husband, and may in fact, have obtained a decree for judicial separation against her husband, preparatory to a divorce being granted. If, during this period, she has sex with another man, the other man is immediately guilty of the offence,” Justice Nariman, who wrote a separate but concurring judgment, observed.

While the Chief Justice wrote the judgment for himself and Justice Khanwilkar, Justices Nariman, Chandrachud and Indu Malhotra wrote separate but concurring judgments. “We are constrained to think so (strike down the law), as it does not treat a woman as an abettor but protects a woman and simultaneously, it does not enable the wife to file any criminal prosecution against the husband. Indubitably, she can take civil action but the husband is also entitled to take civil action,” they said.

The apex court noted that Section 497 on the one hand, protects a woman (accused of adultery) and on the other, does not protect the other woman, namely the wife of the adulterous man.

The court pointed out how women are being subordinated by the law. “The emphasis on the element of connivance or consent of the husband tantamount to subordination of women. Therefore, we have no hesitation in holding that the same offends Article 21 of the Constitution.”

The court took care to make it clear that it was not endorsing adultery. “There can be no shadow of doubt that adultery can be a ground for any kind of civil wrong, including dissolution of marriage. But the pivotal question is whether it should be treated as a criminal offence.

“When we say so, it is not to be understood that there can be any kind of social licence that destroys the matrimonial home. It is an ideal condition when the wife and husband maintain their loyalty. We are not commenting on any kind of ideal situation but, in fact, focusing on whether the act of adultery should be treated as a criminal offence,” Chief Justice Misra observed.

On privacy, the court said: “The whole scenario is extremely private. It stands in contradistinction to the demand for dowry, domestic violence, sending someone to jail for non-grant of maintenance or filing a complaint for second marriage. Adultery stands on a different footing from the aforesaid offences. If it is treated as a crime, there would be immense intrusion into the extreme privacy of the matrimonial sphere. It is better to be left as a ground for divorce.”