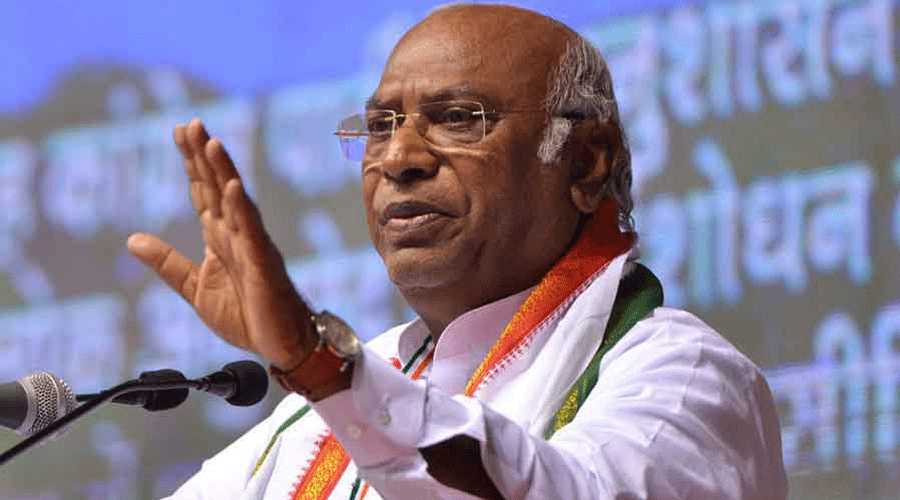 The Enforcement Directorate (ED) has also summoned former Union minister Pawan Kumar Bansal, who is Associated Journals Limited's managing director and interim treasurer of the Congress party, to appear before it on Tuesday in connection with the case.

Seventy-nine-year-old Kharge, the Leader of Opposition in Rajya Sabha, is currently the CEO of Young Indian and hence summoned to join the investigation, they said.

Kharge was questioned by the ED for about five hours and his statement was recorded under the Prevention of Money Laundering Act (PMLA), officials said.

The federal probe agency has registered the fresh case under the criminal provisions of the PMLA after a trial court here took cognisance of an Income Tax Department probe against Young Indian Pvt Ltd on the basis of a private criminal complaint filed by BJP MP Subramanian Swamy in 2013, sources said.

The ED has been probing AJL and the role of some Congress leaders under the anti-money laundering law since 2016 after taking cognisance of a CBI FIR in the matter.

The agency had earlier alleged that the accused in the AJL case, including former Haryana chief minister and Congress leader Bhupinder Singh Hooda and the late Congress leader Motilal Vora, "used the proceeds of crime" in the form of a land plot allotted ‘illegally’ to AJL in Panchkula and pledged it to avail loan from a Syndicate Bank branch (Bahadur Shah Zafar Marg) in Delhi for constructing a building in Mumbai's Bandra area.

After the ED examined Kharge on Monday, the Congress party’s whip in Lok Sabha Manickam Tagore accused the government of "harassing" him.

Tagore said the government ‘wants to insult Dalit leaders’, and added Kharge would not surrender to such tactics.

BJP MP Swamy had accused Sonia Gandhi, Rahul Gandhi and others of conspiring to cheat and misappropriate funds with Young Indian Pvt Ltd paying only Rs 50 lakh to obtain the right to recover Rs 90.25 crore that Associate Journals Ltd owed to the Congress.

The Delhi High Court in February last year had issued a notice to the Gandhis for their response on the plea of Swamy seeking to lead evidence in the matter before the trial court.

They, however, contended in the Delhi High Court that the plea by Swamy was ‘misconceived and premature’.

The other accused in this case filed by Swamy are Suman Dubey and technocrat Sam Pitroda. They have earlier said that they did nothing wrong.