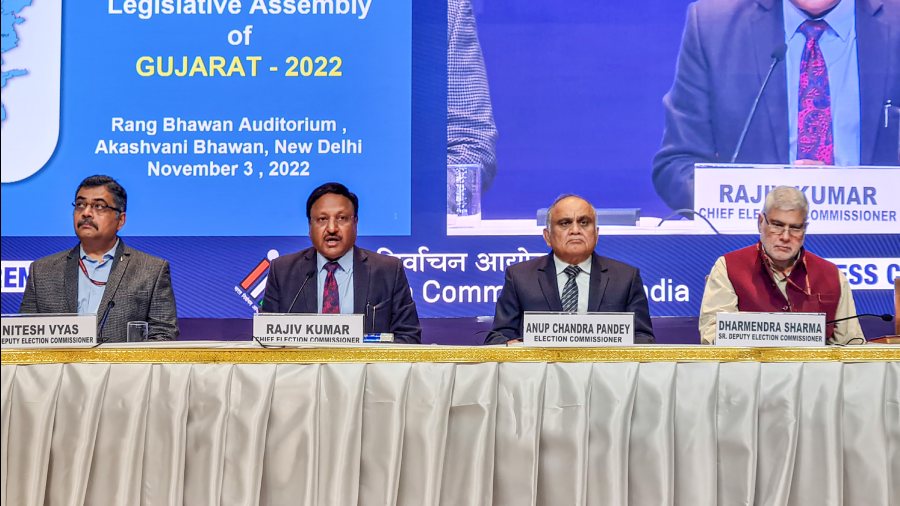 Assembly elections in Gujarat will be held in two phases on December 1 and 5 with the counting of votes on December 8 along with that of Himachal Pradesh, Chief Election Commissioner Rajiv Kumar announced on Thursday.

Of the total 182 assembly seats in Gujarat, voting for 89 seats will be held on December 1 and the balance 93 seats on December 5, Kumar told a press conference that was also attended by Election Commissioner Anup Chandra Pandey and senior officials from the poll authority.

The Commission had announced elections to Himachal Pradesh on October 14 but skipped declaring polls for Gujarat.

Kumar also brushed aside opposition criticism of bias in delaying the poll announcement for Gujarat, contending that the Commission had to balance many things including weather, last date of the term of the assembly and the number of days the model code of conduct should be in force.

The term of the Gujarat assembly ends on February 18, 2023 and the elections have been announced 110 days in advance, Kumar said.

It is a combination of multiple factors and we are well within the factors of consideration, including polls in nearby states, the chief election commissioner said.

He indicated that the elections could have been announced a couple of days earlier, but for the tragedy that took place in the state.

We also had to take note of the tragedy that had befallen the state. That was also one factor for the delay. There was state mourning in the state till yesterday (Wednesday). So, it is (because of) multiple factors, Kumar said.

On the larger question of impartiality of the Election Commission, Kumar said a large number of assembly elections have thrown up surprising results.

Actually, actions and outcomes speak larger than words. In a large number of assembly elections, results have shown, at times, those who were critical of the Commission have got surprising results. I don't want to go into details, Kumar said.

The notification for the assembly elections will be issued on November 5 and November 10 for the first and the second phases respectively.

The last date for withdrawal of nominations for the first phase is November 17 and for the second phase it is November 21.

Prime Minister Narendra Modi has been visiting Gujarat to unveil a slew of schemes and lay the foundation for various projects ahead of the polls.

There are over 4.9 crore eligible voters in total in Gujarat, including 4.6 lakh first time voters. The EC will set up 51,782 polling stations for voters of which 34,276 will be set up in rural areas, while 17,506 will be in urban areas.

The Congress witnessed a series of defections after the assembly elections and the BJP increased its tally in the House to 111. The Congress numbers were reduced to 62.

The Aam Aadmi Party (AAP) has trained its sights on Gujarat and has already entered the election mode. Delhi Chief Minister Arvind Kejriwal has made several trips to Gujarat in a bid to make inroads for the AAP in the state after a successful foray in Punjab.

Also, these elections along with a few more in other states in 2023 are being seen as crucial in the run up to the 2024 Lok Sabha elections when Modi and BJP will bid for their third consecutive government at the Centre.