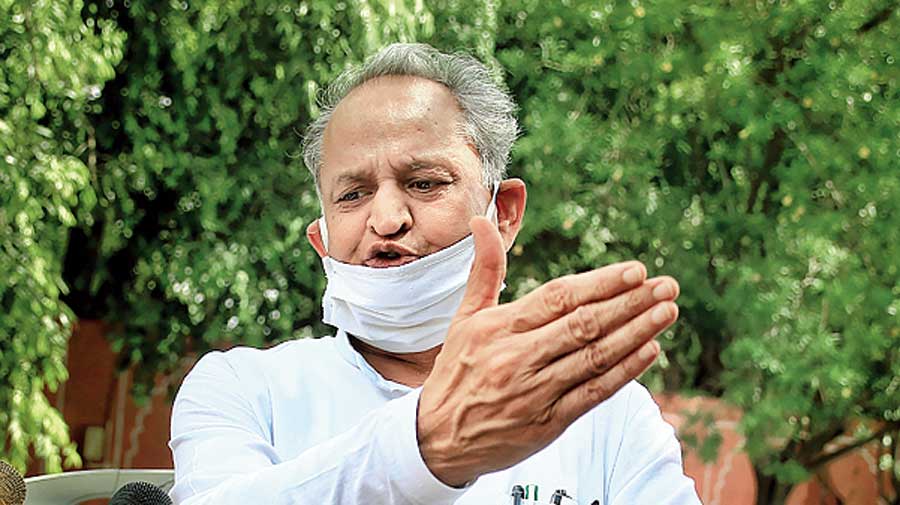 The Enforcement Directorate (ED) raided the premises of Rajasthan chief minister Ashok Gehlot's brother on Wednesday as part of countrywide searches in connection with a money-laundering case linked to an alleged fertiliser scam, officials said.

ED sleuths were assisted by personnel of the Central Reserve Police Force (CRPF), who were seen standing guard at the farmhouse and residence of the Gehlots' in Mandore area of Jodhpur district.

The searches come at a time when a political slugfest is currently on between CM Gehlot and his former deputy Sachin Pilot.

Pilot, a former Union minister, was recently sacked as the deputy CM and PCC chief of the state.

Officials said the raids are being carried out against Ashok Gehlot's elder brother Agrasain Gehlot, who is the promoter of a seeds and fertiliser company identified as Anupam Krishi.

Responding to the raids, Congress leader Randeep Surjewala told reporters in Jaipur, "Prime Minister Modi has created 'raid raj' in the country but we are not going to be scared."

When the Centre's "gimmicks" failed to topple the Congress government in Rajasthan, ED raids started at the premises of Gehlot's elder brother, he said

The agency, officials said, is searching at least six locations in the desert state including at the premises of a former Congress MP, who is alleged to have business ties with Agrasain Gehlot.

They said the raids are being conducted by the central probe agency at 13 places in the country including Rajasthan, West Bengal (2), Gujarat (4) and Delhi (1).

The action came after the agency filed a criminal Enforcement Case Information Report (ECIR), ED equivalent of a police FIR, in a 2007-09 Customs department case of alleged irregularities in the supply of subsidised Muriate of Potash (MOP) to farmers and investigation in this case was finalised in 2013.

The ED complaint under the Prevention of Money Laundering Act (PMLA) has been filed after studying the FIR and chargesheet filed by the Customs and its specialised probe arm Directorate of Revenue Intelligence (DRI), they said.

The raids are aimed to collect evidence in this scam case which is stated to be worth about Rs 60 crore, officials said.

Officials of the agency are carrying out the searches under the provision of the PMLA.

Sources alleged that Agrasain Gehlot and his company have been slapped with a Customs penalty of about Rs 7 crore in this alleged fertiliser supply scam.

The ED is also probing an alleged forex law violation case against a Jaipur-based businessman Ratan Kant Sharma, who is alleged to have had business ties with Ashok Gehlot's son Vaibhav in the past.

The Income Tax Department on July 13 had carried out multiple raids at over 40 premises of three Rajasthan-based business groups on tax evasion charges and officials had said it seized about Rs 12 crore cash and vital documents.

The premises linked to two state Congress leaders and a business group stated to be close to the top party leadership of Rajasthan were searched.

The Central Board of Direct Taxes had later said that "several incriminating evidences in the form of loose papers, diaries, digital data were found that indicate bullion trading in cash, investment of cash in properties among others."