The former governor died in Goa on Friday. He was 87. 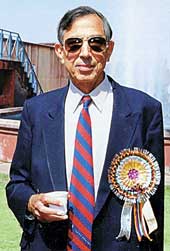 Jharkhand Governor Droupadi Murmu on Saturday condoled the demise of his predecessor Ved Prakash Marwah, describing him as a 'visionary' and an 'able administrator'.

Marwah, who was the police commissioner of Delhi from 1985-88, had also served as the governor of Jharkhand, Mizoram and Manipur. In Jharkhand, he held the post for little over a year from 2003.

Marwah died in Goa on Friday. He was 87.

'Marwah was an alert, sensitive and able administrator. He was a visionary, who always inspired the police force and kept the morale of officers high,' Murmu said in her condolence message issued by the Raj Bhavan.

Soren said Marwah had held several important posts during his lifetime and served the country well.

'May the almighty give strength to the family at this hour of grief,' the CM added.