We need to build new approaches, this is a unique form of both the developed world and emerging economies: Amitabh Kant 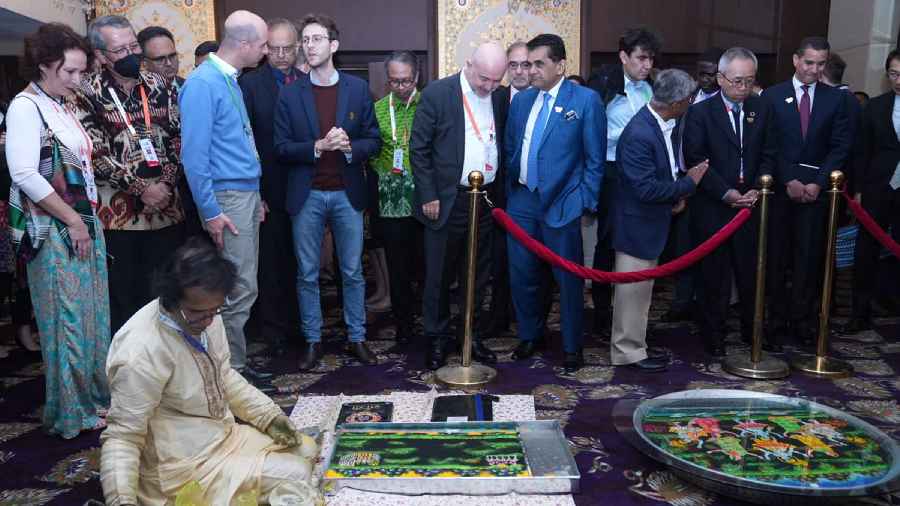 At the first meeting of the G20 Sherpas, India on Monday proposed dovetailing climate action with sustainable development, making a clear bid to bring issues facing the emerging economies and the global south in sharp focus on the world stage.

The discussions on Monday focussed on technological transformation in the digital economy, health and education, green development and India's Lifestyle for Environment (LiFE) initiative.

Initiating the discussions, India's G20 Sherpa Amitabh Kant made a strong pitch for working together through hope, harmony and healing to deal with the global challenges, with a focus on developing countries and the global south whose voice is often unheard.

At least two officials said the meetings were held in a cordial atmosphere with no direct reference to the ongoing Ukraine conflict.

"References to Ukraine were mostly in the context of its impact on global supply chains, high energy costs, and food security," a senior official said.

"The Sherpas expressed strong support for India's presidency and for the priorities that have been outlined. They felt that these priorities were not just ours but that of everybody. They felt that there was a pressing need to act on some of these important priorities," India's G20 Coordinator Harsh Vardhan Shringla told reporters after the discussions.

Earlier in the day, Kant stressed that Prime Minister Narendra Modi has said that India's Presidency would like to be inclusive, ambitious, action-oriented and decisive. "We will be, but that is not feasible nor possible without all of you. Therefore, we would like the support, positive and forward-looking support from all of you to make the G20 a very vibrant, very dynamic and a very positive group to drive global growth and global sustainability and digital transformation," Kant said at the first session on technology transformation.

The delegates were treated to an immersive Rajasthani experience with each of the Sherpas donning colourful 'saafas' (headgear), jackets and stoles at the Manek Chowk inside the City Palace.

As the evening wore on, the delegates gathered for a 'Chai pe Charcha' at Jag Mandir Palace built on an island in Lake Pichola accompanied with traditional Rajasthani dance performances against the backdrop of the setting sun.

Shringla said India's objective was to present its narrative on the global agenda and also highlight developmental achievements, tourism potential and cultural heritage.

"Our priorities should become the global priorities. That is a substantive part of it," he said.

On issues such as climate finance, food supply security, and energy prices, Shringla said these were the goals of every country and G20 can come together and do something about it.

"We are going to discuss those issues on the finance track, the sherpa track as well as the foreign ministers' level. I think we will get outcomes that the world would be happy about," the former foreign secretary said.

Kant said India's G20 Presidency will seek to advocate the priorities of the developing countries and the global south in addition to that of the partners of the grouping.

"Our perspective is that we should have a win-win collaboration between all of us, developing countries, the global south, and advanced economies.

Highlighting India's initiatives on digital transformation, Kant said, "In digital economy, we are focussing on digital public infrastructure, quite a bit on our experience of creating digital identities and bank accounts for everyone. This has enabled us to lift vast section of the population above the poverty line through direct benefit transfer and fast payments." An overview of the finance track and India's priorities were presented to all delegates by Ajay Seth, Secretary Department of Economic Affairs, Ministry of Finance.

On the sidelines of the Sherpa meeting, Kant interacted with Sherpas of all the Emerging Market Economies on issues such as resilient and accelerated growth of the global south.

He also held productive discussions with the Sherpas from the G20 Troika, which consists of the current, past, and future Presidencies, namely India, Indonesia and Brazil.

India was handed over the presidency of the influential bloc at the end of the two-day G-20 summit in Bali, hosted by Indonesia last month. The next G20 Leaders' Summit at the Heads of State/government level is scheduled to be held on September 9 and 10 in New Delhi 2023.

The G20 or Group of 20 is an intergovernmental forum of the world's major developed and developing economies.

Together, they account for over 80 per cent of the global Gross Domestic Product, 75 per cent of international trade and two-thirds of the world population.