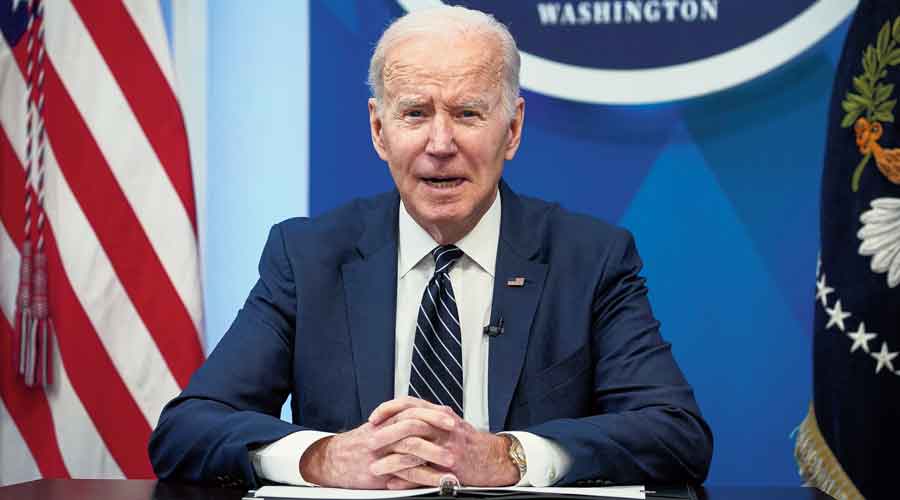 US President Joe Biden on Monday brought the weight of his office behind the message that India should not increase its volume of energy purchases from Russia and should do more in the context of the Ukraine conflict, reiterating what his administration has been telling India at lower levels.

White House spokesperson Jen Psaki, briefing journalists soon after the virtual summit between Biden and Prime Minister Narendra Modi, said the President had conveyed that it was not in India’s interest to increase its energy imports from Russia, which has offered discounted oil to New Delhi.

Asked whether the President had received a commitment from the Prime Minister on this, she said: “I’ll let Prime Minister Modi and Indians speak to that”.

Psaki underlined that India currently imported only one to two per cent of its oil from Russia.

Replying to another question, however, she indicated that the series of conversations with India at various levels appeared to be showing results, citing India’s condemnation of the civilian killings in Bucha as an example.

“The leader-to-leader conversation” is an attempt to build on this, she said. Without naming Russia, India has condemned the attack on civilians in Bucha and called for an independent investigation.

Psaki said India imported substantially from the US — about 10 per cent of Indian energy imports are from America — and clarified that importing oil from Russia was not a violation of the sanctions.

What Biden said on Monday is what, over the past couple of weeks, his administration has been telling India in phone conversations, physical meetings and media statements.

The US has already benefited from India falling in line in recent years with Washington’s unilateral sanctions on Iran and Venezuela. This has led to the US accounting for about 10 per cent of India’s energy purchases.

On whether Biden had asked India to condemn the Russian invasion of Ukraine, Psaki said: “They have condemned the recent horrific atrocities we saw in Bucha, and certainly as we see more, we expect them to do exactly that as well.”

Earlier, in his opening remarks at the start of the virtual meeting, Biden had said that India and the US were going to continue “our close consultation” on how to manage the destabilising effects of the Ukraine conflict.

His remarks come at a time India has refused to side with the US on the Russia-Ukraine war and stop doing business with the Russians.

Biden made no comment on India’s stance in his opening remarks, which were telecast live, and was appreciative of New Delhi’s humanitarian assistance to Ukraine.

He said “our continued dialogue” was key to ensuring that the bilateral relationship continued to grow deeper in managing the dynamics in “your part of the world” --- a not-so-subtle reference to China.

Modi said the virtual meeting with Biden, ahead of the 2+2 ministerial dialogue in Washington later in the day, would give direction to that engagement. “As the world’s largest and oldest democracies, we are natural partners,” he said.

Modi too avoided mentioning the differences over Ukraine and said he had spoken to both the Russian and Ukrainian Presidents and had called for peace.

He said he had suggested to Russian President Vladimir Putin that he speak directly to his Ukrainian counterpart, Volodymyr Zelensky. He mentioned the discussion on Ukraine in Parliament and India’s condemnation of the civilian killings in Bucha.

External affairs minister S. Jaishankar and defence minister Rajnath Singh are in Washington for the fourth edition of the 2+2 ministerial dialogue with their American counterparts.

They called on Biden and also met their counterparts separately before the start of the 2+2 dialogue.

The virtual meeting between Modi and Biden was a White House initiative and was announced on Sunday evening.

Modi hopes for peace in Ukraine