Prashant Kishor, the poll consultant associated with several victorious election campaigns, is set to work with Mamata Banerjee for the 2021 Assembly polls, a source told The Telegraph on Thursday night after the chief minister met him at the state secretariat during the day.

“It’s a done deal,” said the source familiar with the discussions.

Mamata and Kishor have renewed contact at a time the BJP is snapping at the heels of the Trinamul Congress and the strategist’s client in Andhra Pradesh has pulled off a spectacular victory at the hustings.

Kishor is also the national vice-president of the Janata Dal United, a BJP ally. Although the JDU, whose post-poll relations with the BJP have turned tense over cabinet allocation, sought to draw a distinction between Kishor’s political and professional roles, his proposed association with Trinamul and the timing are certain to draw attention.

Kishor, who was accompanied by Mamata’s nephew and Diamond Harbour MP Abhishek Banerjee, spent an hour and 45 minutes in a closed-door meeting at the chief minister’s office.

Kishor runs I-PAC, an apolitical platform of young professionals, which carries out a range of election-related consultancy services and whose feedback plays a role in fashioning the client’s campaign strategy and focus areas. 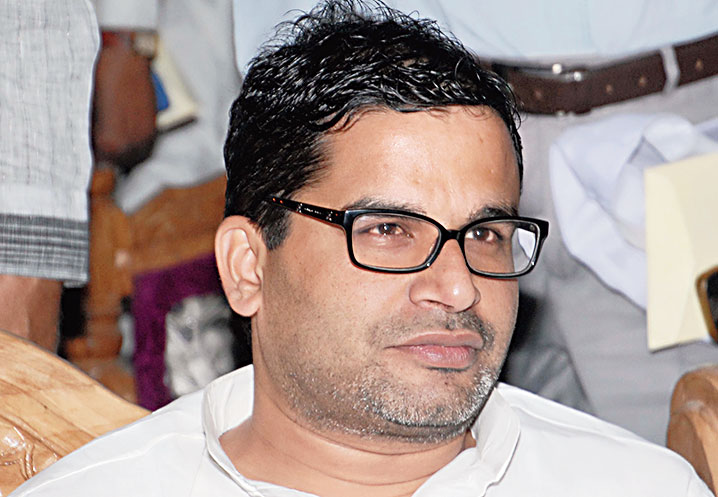 The source said that although I-PAC did not have a presence in Calcutta now, a full team was expected to reach the city as soon as the nitty-gritty was sorted out.

Earlier, Trinamul sources had said Kishor was brought over to look at the Bengal Lok Sabha result data and share his views. The BJP won 18 of the 42 Lok Sabha seats in Bengal and secured leads in 121 of the 294 Assembly segments.

“Work is under way to get Kishor to become a part of our team to oversee the campaign in the run-up to the Assembly polls,” said a Trinamul leader. “Abhishek himself brought Kishor this time,” the leader added, expressing optimism that an arrangement would be finalised.

Kishor’s last client, Y.S. Jaganmohan Reddy of the YSR Congress, had swept the Andhra polls, winning 151 of the 175 Assembly seats in the state and 22 of the 25 Lok Sabha seats.

Kishor, 42, had also been associated with the blockbuster campaign of Narendra Modi in 2014 and the successful run in Bihar by Nitish Kumar and Lalu Prasad before the allies parted ways.

But the limitations of consultants — in the absence of a charismatic leader, well-oiled organisation and an imaginative narrative — were on display in Uttar Pradesh when Kishor chose to work with the Congress during the Assembly polls in 2017.

JDU secretary-general K.C. Tyagi sought to put the matter in perspective. “If a JDU leader engages in any commercial activity through his company, for example, a doctor from our party engages in private practice and gives a pain-relieving pill to a Congress leader, what has the party to do with it?” asked Tyagi.

JDU spokesperson Ajay Alok said in Patna: “Neither we nor the party know what the meeting was about and why or what happened. Only Prashant Kishor can throw light on it. The party has nothing to do with it.”

Trinamul had considered getting Kishor on board before the Assembly elections of 2016, soon after his grand success in Bihar and Mamata had met him. But the association had not materialised back then, after which Mamata led her party to a thumping victory that year.