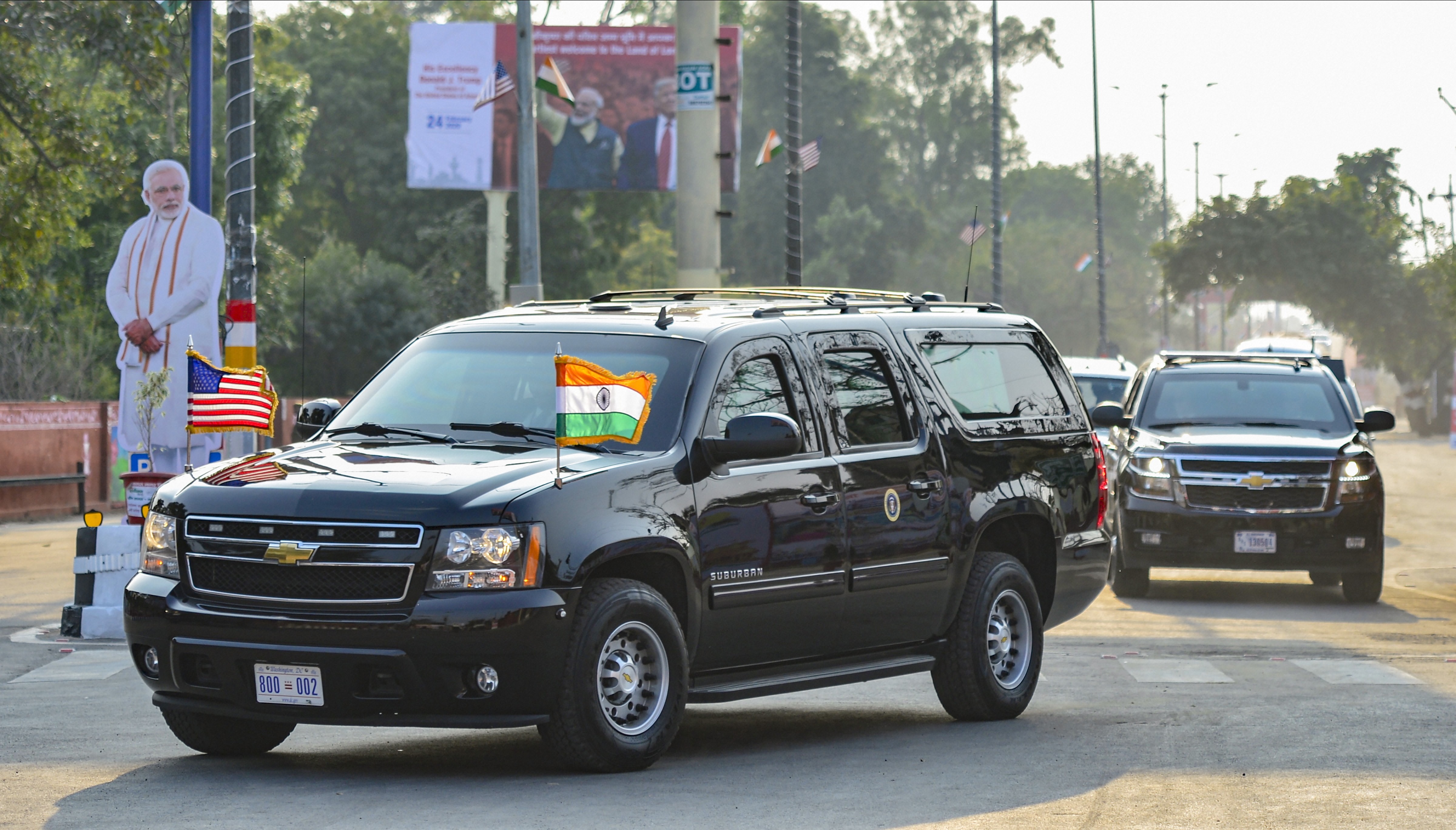 US President Donald Trump and First Lady Melania Trump on Monday evening visited the iconic Taj Mahal as they marvelled at the famed 17th century Mughal-era mausoleum built as a monument of love.

Trump, accompanied by his wife, daughter Ivanka and son-in-law Jared Kushner, arrived in Agra from Ahmedabad.

The Taj Mahal, which was built by Mughal Emperor Shah Jahan in memory of his wife Mumtaz Mahal who died in 1631, has been refurbished for the visit.

President Trump and the First Lady held hands as they strolled at the Taj complex and later wrote in the visitors' book. They were also briefed about the history and importance of the monument

The US President's visit to Agra and Taj has generated huge excitement among the local residents. Some shops have even displayed their own banners, welcoming Trump to India.

Trump also took to Twitter to express his sentiments about his first official visit to India, which began with a visit to Ahmedabad.

'First lady and I have travelled 8,000 miles around the world to give a message to each citizen of this country America loves India, America respects India, and the people of America will always be true and committed friends of the people of India,' the American leader tweeted in Hindi.

From the Kheria airbase, Trump's convoy of over 30 vehicles drove to Oberoi Amarvilas hotel near the Taj Mahal complex, as over 15,000 school students who lined up both sides of the route held US and India flags and cheered the US President as his motorcade passed by.

Massive billboards bearing greeting messages and pictures of Trump, First Lady and Modi dotted the nearly 13-km convoy route as street roundabouts decked up with US and India flags symbolised the US-India friendship.

An extensive three-layered security is in place for his Agra visit, and authorities had got the Taj Mahal premises cleared of visitors by noon, hours ahead of Trump's visit to the celebrated architectural landmark. 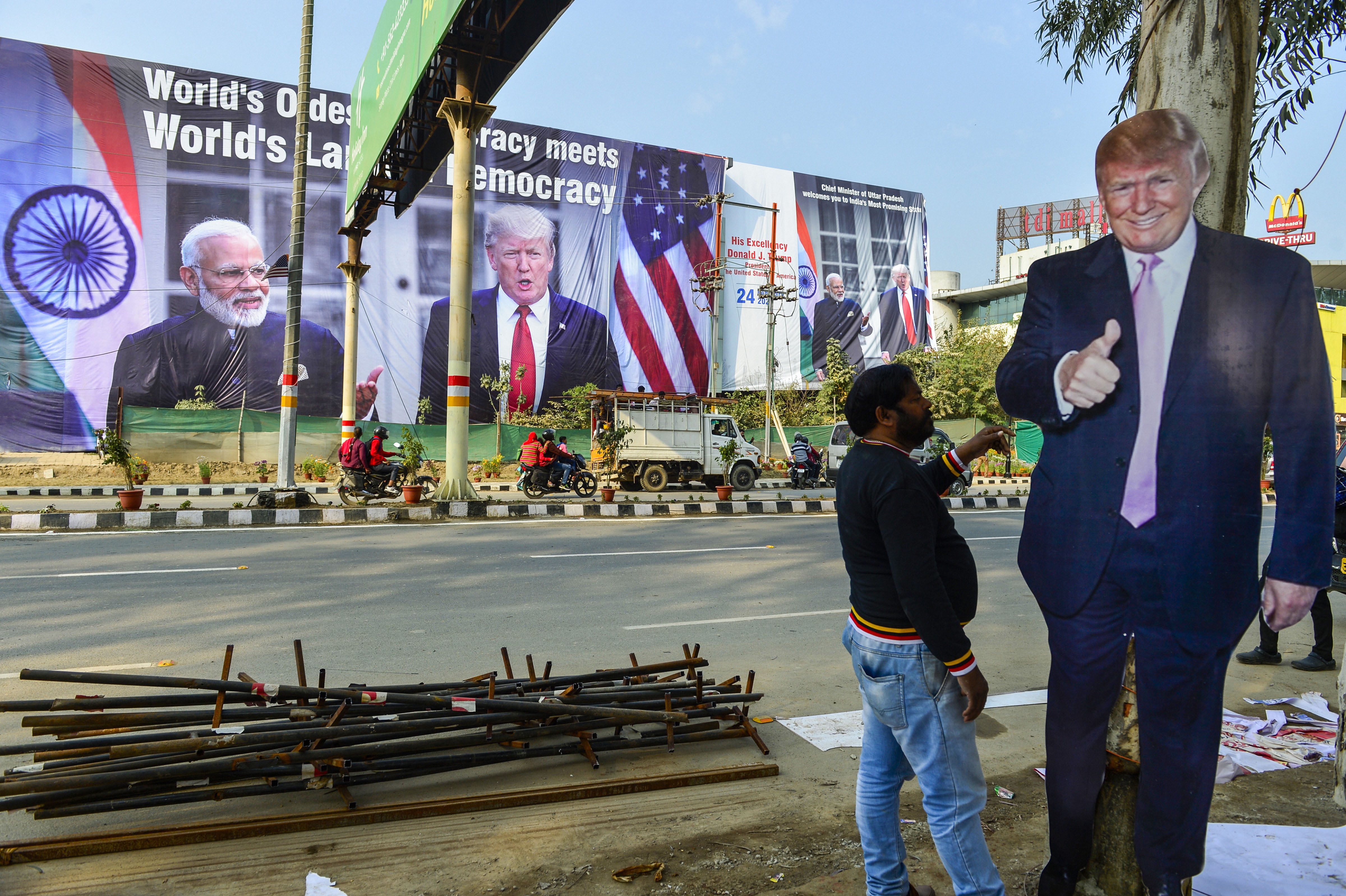 A worker arranges billboards of Donald Trump, near Taj Mahal ahead of the US President's maiden visit to India, in Agra, Sunday, February 23, 2020
PTI

Trump and the First Lady enjoyed the view of the marble marvel in the evening as a cool breeze added to the pleasant weather.

They also posed for pictures for photographers. The couple will spend about an hour at Taj to catch the sunset from the UNESCO heritage site, before heading to Delhi.

The last US President to visit the the Mughal-era wonder was Bill Clinton who had come to India in 2000. He had seen the Taj along with daughter Chelsea Clinton.

In 1959, then US President David Dwight Eisenhower had visited Taj along with then Prime Minister Jawaharlal Nehru.

From massive billboards bearing greeting messages to street roundabouts decked up with US and India flags, Agra had waited excitedly to welcome President Trump and authorities made arrangements to present a 'lively Agra' to the visiting President, seeking to shake off the old tag of 'city of ghosts'. 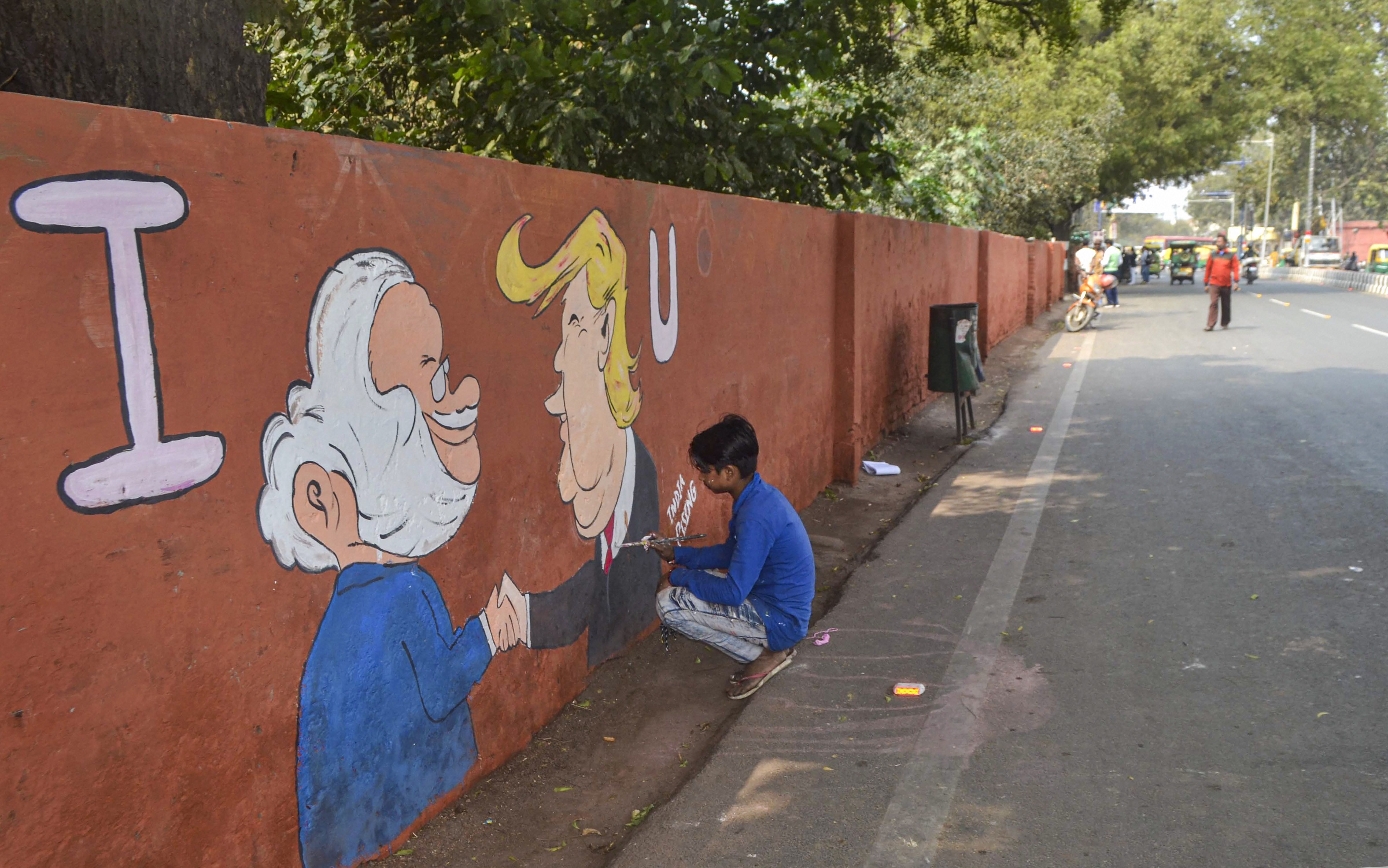 A worker paints on a wall on the route in which US President Donald Trump is scheduled to travel during his maiden visit to India, in Agra, Friday, February 21, 2020
:PTI

'During Clinton's visit, the city streets were deserted due to security arrangements, prompting him to call it a 'city of ghosts'. This time the excitement can be felt in the air,' said Mohit Kumar, who works at a hotel in the Tajganj area.

'I was very young in 2000 when Clinton visited. We are very excited and happy that another US President has come to our city due to which the civic amenities have been improved,' he said.

On his arrival at the airbase, over 250 artistes drawn from different parts of Uttar Pradesh performed Mayur dance, Rai folk dance and Dhobia folk dance as sonorous sounds of bumrasia nagada, dholak, mridang, added to the festive ambience.

A giant billboard there featuring Trump, First Lady Melania Trump and Prime Minister Modi greeted the couple with a message Grand welcome of India's best friend to the 'city of love' Agra.

'From the airport, the US President's convoy travelled till the Oberoi Amarvilas hotel situated near the East Gate of the Taj Mahal complex. From there the President and his family and members of high-level delegation accompanying him moved into eco-friendly golf carts to travel into the monument premises,' a senior official said.

As per Supreme Court directions, petrol or diesel-operated vehicles are not permitted within 500m of the Taj Mahal's gate.

The architectural marvel inscribed into the UNESCO World Heritage Site in 1983 is made of white Makrana marble and red sandstones, and renowned for its intricate inlay work on the stone surface.

Taj Mahal, considered one of the seven wonders of the world, stands on the bank of Yamuna, and is always high on the itinerary of visiting heads of state.

In 2015, then US President Barack Obama was scheduled to visit the monument during his India visit. It is said he could not do so due to security reasons.

It is one of the most photographed sites in the world.