Donald Trump to halt at Sabarmati Ashram during Ahmedabad visit

Although preparations have been on in anticipation of the Trumps stopping by, it did not feature in the schedules shared in Delhi, Washington 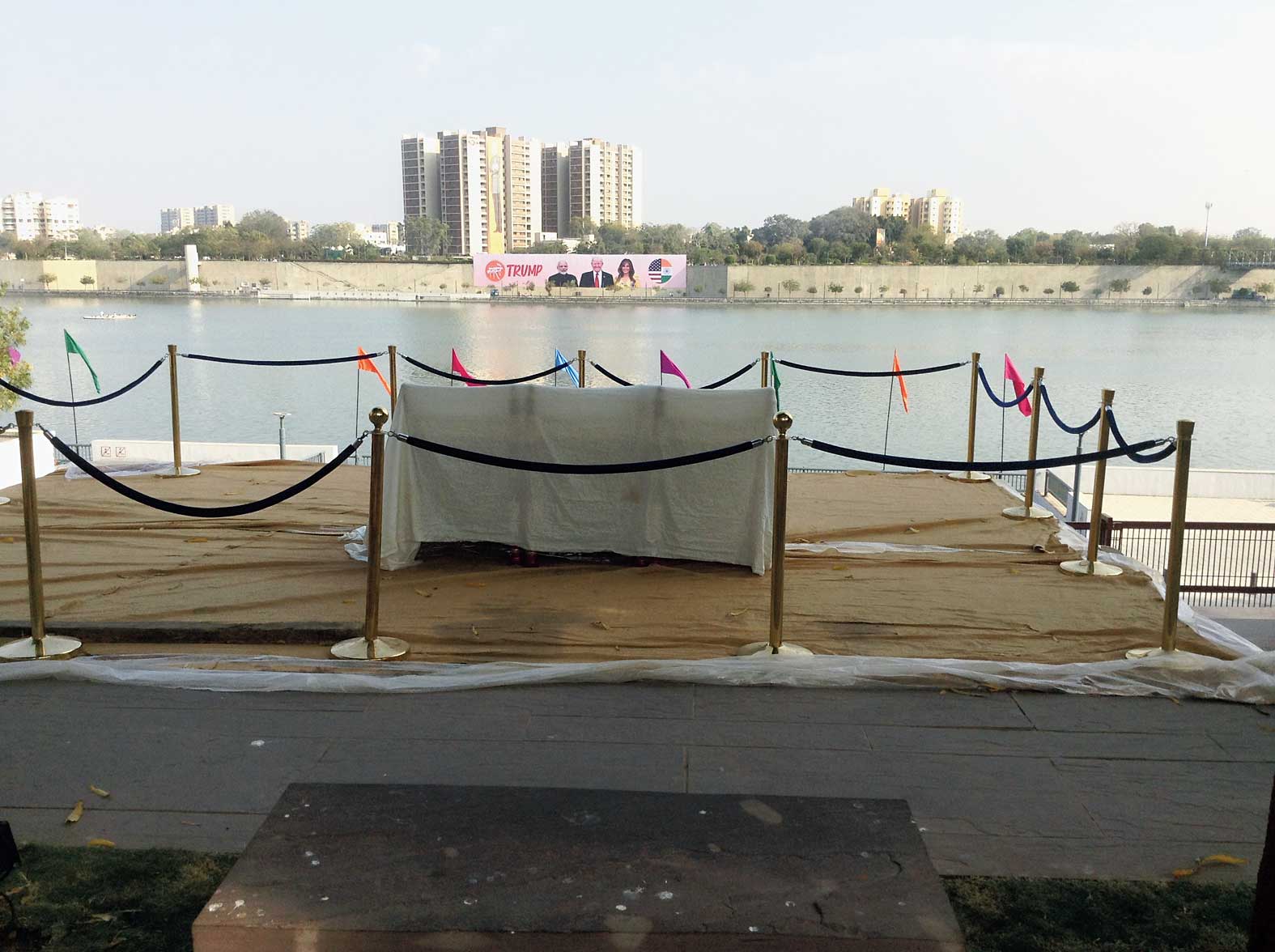 The Sabarmati Ashram riverfront where seating arrangements have been made for Trump.
Picture by Anita Joshua
Anita Joshua   |   Ahmedabad   |   Published 23.02.20, 08:38 PM

A brief halt at the Sabarmati Ashram was pencilled into President Donald Trump’s Ahmedabad schedule three hours before he departed from Washington for his 36-hour India visit, ending the uncertainty that went down to the wire.

Although preparations have been on at the Sabarmati Ashram for the past fortnight in anticipation of the Trumps stopping by at what is a must-do for any visiting dignitary, it did not feature in the schedules shared in both capitals till date.

Politics in Gujarat may have shifted away from what the Father of the Nation stood for but many Gujaratis found it inexplicable that the President of the US would visit Ahmedabad and leave without going to the Sabarmati Ashram where the destiny of not just India but also the British empire and colonialism in general was shaped.

The delay in working Sabarmati into the schedule is attributed to lack of time in a packed visit and also security concerns since the visit to the ashram entails more travel in the city, which will be in lockdown mode around his route.

Besides, since First Lady Melania Trump and the President’s daughter Ivanka were apparently keen on seeing the Taj Mahal in Agra at sunset, that part of the schedule could not be disturbed.

Compared to the itinerary given to the White House reporters travelling with Trump, the new schedule shows the President arriving in India about 45 minutes earlier than was initially planned. The remaining part of his schedule shows no change.

The ashram visit will be a very short one — all of 15 minutes. It will be the President’s first stop in Ahmedabad after touchdown and will entail only a visit to Hriday Kunj, which was Mahatma Gandhi’s home in the ashram where he lived with Kasturba Gandhi for 12 years from 1918.

The state government, which usually makes the arrangements for such visits including picking up the tabs, had made a provision for Trump and Prime Minister Narendra Modi to sit by the riverfront where they would have been greeted by a mirror image plus that of Melania in the form of one of the many “Namaste Trump” banners that have been put up across the city.

Atul Pandya, director of the Sabarmati Ashram Preservation & Memorial Trust, told The Telegraph on Sunday night that there was time only for the Trumps to visit Hriday Kunj. “They will not go to the riverfront,” he said.

Asked what was the normal tour plan for visiting dignitaries, Pandya said it varied. “Some go to the Charkha Gallery and the Gandhi statue, others go to the exhibition gallery. It depends on the time they have.”

As a result of the Sabarmati Ashram halt, the President will see more of Ahmedabad than if he had driven straight to Motera Stadium for the Namaste Trump event.

Besides sprucing up the city and covering up the parts that expose the warts in the famed Gujarat model, elaborate arrangements are being made to ferry people from all over the state to fill the auditorium and also line up the route the “Beast” — the US presidential car — will take.