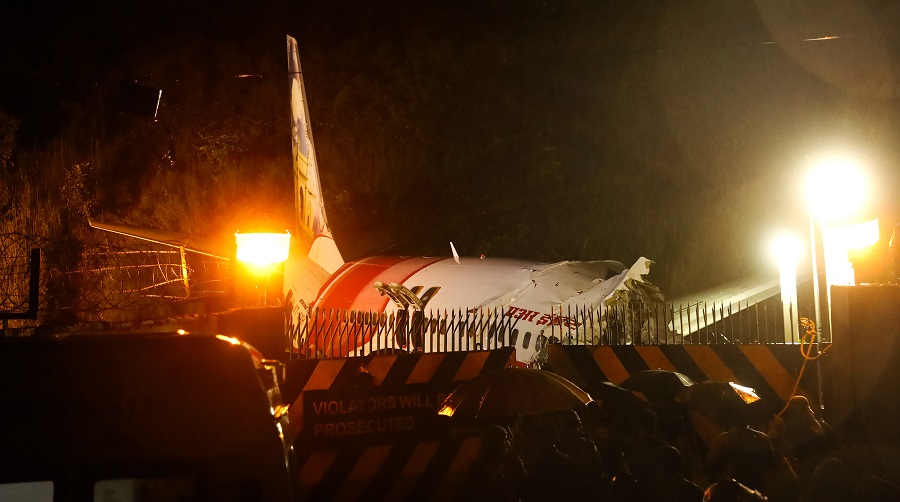 Mangled remains of an Air India Express flight en route from Dubai after it skidded off the runway while landing, in Kozhikode on Friday
PTI
Our Bureau, Agencies   |   Calcutta, New Delhi   |   Published 08.08.20, 12:54 PM

Aviation regulator DGCA had issued a show-cause notice to the director of the Kozhikode airport on July 11 last year after it found "various critical safety lapses", officials said on Saturday.

The Directorate General of Civil Aviation pointed to cracks on the runway, water stagnation and excessive rubber deposits among other lapses in its show-cause notice.

The DGCA conducted the inspection after an Air India Express flight coming from Dammam in Saudi Arabia had a "tail strike" while landing at the Calicut (Kozhikode) airport on July 2 last year, an official said.

Friday’s crash of an Air Indian Express flight from Dubai occurred a little over a year later. Th plane, with 190 people on board overshot "runway 10" at the Calicut airport in heavy rain and went down 35 feet into a gorge before breaking into two pieces, killing at least 18 people.

Among the dead were the Vande Bharat flight’s captain-in-command, Deepak Vasanth Sathe, his co-pilot Akhilesh Kumar and an 18-month-old child, officials said in Kerala.

Rescue operations were completed around midnight and airport operations resumed at 3 am on Saturday morning.

The digital flight data recorder and cockpit voice recorder have been recovered from the crash site, a DGCA official told PTI.

"After the July 2 incident last year, the DGCA inspected the airport on July 4 and July 5 and found various critical safety lapses," said a senior DGCA official.

On July 11, Kozhikode airport director K Srinivasa Rao was issued a show cause notice, added another DGCA official. However, it is not clear if any action was taken against Rao after the show-cause was issued.

The notice also said "excessive rubber deposit" was observed in the area from runway C/L marking to three metres on both the sides of touchdown zone of runway 28.

Similar excessive rubber deposits were found by the DGCA along runway C/L marking of touchdown zone of runway 10, according to the notice.

"Water stagnation of about 1.5 metre length was observed on the area between runway edge and intermediate turn pad on runway 28," it said.

Besides, the DGCA found several cracks in aircraft stand number 5. It also observed that a "portion of Apron surface" of about 111 metres was damaged, it said. Apron is the area of the airport where aircraft are parked, refuelled and where passengers board.

"A steep downward slope of approximately five feet depth is observed immediately after the apron behind aircraft number 1, which needs to be levelled and graded," the notice said.

The DGCA observed a shortage of reserve stock of 6,630 litres of Aqueous Film Forming Foam concentrate (AFFF) and 140 kg of "DCP complementary agent" - both are used to put out fires - at the Aircraft Rescue and Firefighting (ARFF) station of the airport.

Scheduled international passenger flights remain suspended in India since March 23 due to the novel coronavirus pandemic.

However, special repatriation flights have been operated by Air India and Air India Express since May 6 under the Vande Bharat Mission to help stranded people reach their destinations. Private carriers have also operated a certain number of flights under this mission.