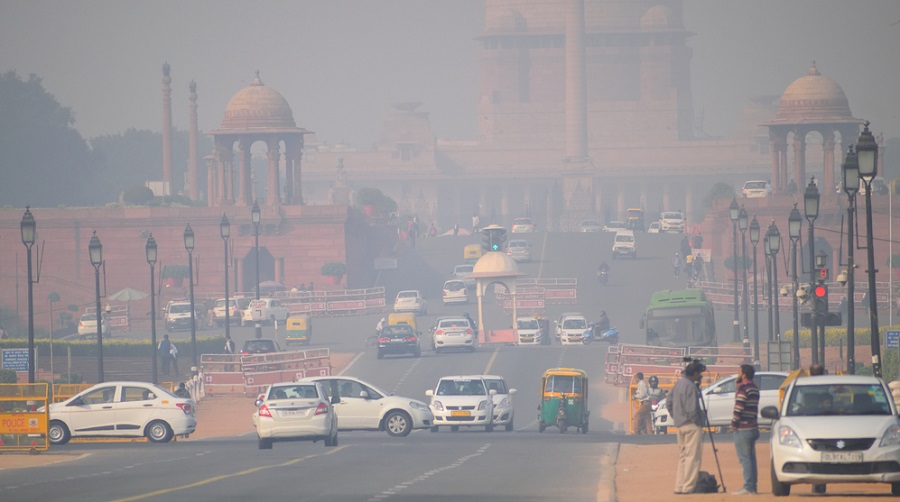 Severe air pollution in Delhi is a year-round problem, which can be attributed to unfavourable meteorological conditions, farm fires in neighbouring regions and local sources of pollution.
Shutterstock
Our Bureau, Agencies   |   New Delhi   |   Published 17.10.20, 12:04 PM

The national capital's air quality was recorded in the 'poor' category on Saturday morning but is likely to improve slightly due to favourable wind speed, according to government agencies.

The air pollution level in Delhi had hit an eight-month high on Thursday but reduced slightly on Friday with favourable wind speed helping in dispersion of pollutants, even as the contribution of stubble burning to Delhi's PM2.5 concentration rose to 18 per cent.

A senior scientist at the India Meteorological Department (IMD) said the maximum wind speed was 10 kilometers per hour on Friday. It is likely to be 12 kmph on Saturday.

Calm winds and cold temperatures are unfavourable for dispersion of pollutants.

The wind direction is expected to be north-north westerly on Saturday, which is likely to increase the impact of stubble burning on Delhi's air quality.

However, the Ministry of Earth Sciences' Air Quality Early Warning System for Delhi said the ventilation index a product of mixing depth and average wind speed is likely to be 9,500 metre square per second on Saturday favourable for dispersion of pollutants.

A ventilation index lower than 6,000 sqm/second, with average wind speed less than 10 kmph, is unfavourable for dispersal of pollutants.

According to the System of Air Quality and Weather Forecasting and Research (SAFAR), the contribution of farm fires to Delhi's PM2.5 concentration rose from around 6 per cent on Thursday to 18 percent on Friday.

It was only around one per cent on Wednesday and around 3 per cent on Tuesday, Monday and Sunday. Air quality is expected to improve further to the lower end of the poor category by Sunday, SAFAR said.

The Central Pollution Control Board (CPCB) had on Friday said meteorological conditions in Delhi have been "extremely unfavourable" for dispersion of pollutants since September as compared to last year.

PM10 concentration between September 1 and October 14 this year has been more as compared to the corresponding period last year, CPCB Member Secretary Prashant Gargava.

With lesser area under non-basmati paddy cultivation this time, the CPCB member secretary hoped the number of stubble burning incidents will be fewer this year as compared to 2019.

Non-basmati paddy straw is considered useless as fodder because of its high silica content so farmers burn it.

Gargava also said that stubble burning peak might not coincide with the peak of adverse meteorological conditions this year due to early harvesting of paddy.

With Delhi-NCR bracing for months of poor air quality, experts have warned that high levels of air pollution can aggravate the COVID-19 situation.

Severe air pollution in Delhi is a year-round problem, which can be attributed to unfavourable meteorological conditions, farm fires in neighbouring regions and local sources of pollution.

According to an analysis by the Council on Energy, Environment and Water, a Delhi-based think tank, transportation contributes the most -- 18 to 39 per cent -- to Delhi's air pollution.

Road dust is the second largest source of air pollution in the city (18 to 38 per cent), followed by industries (2 to 29 per cent), thermal power plants (3 to 11 per cent) and construction (8 per cent).