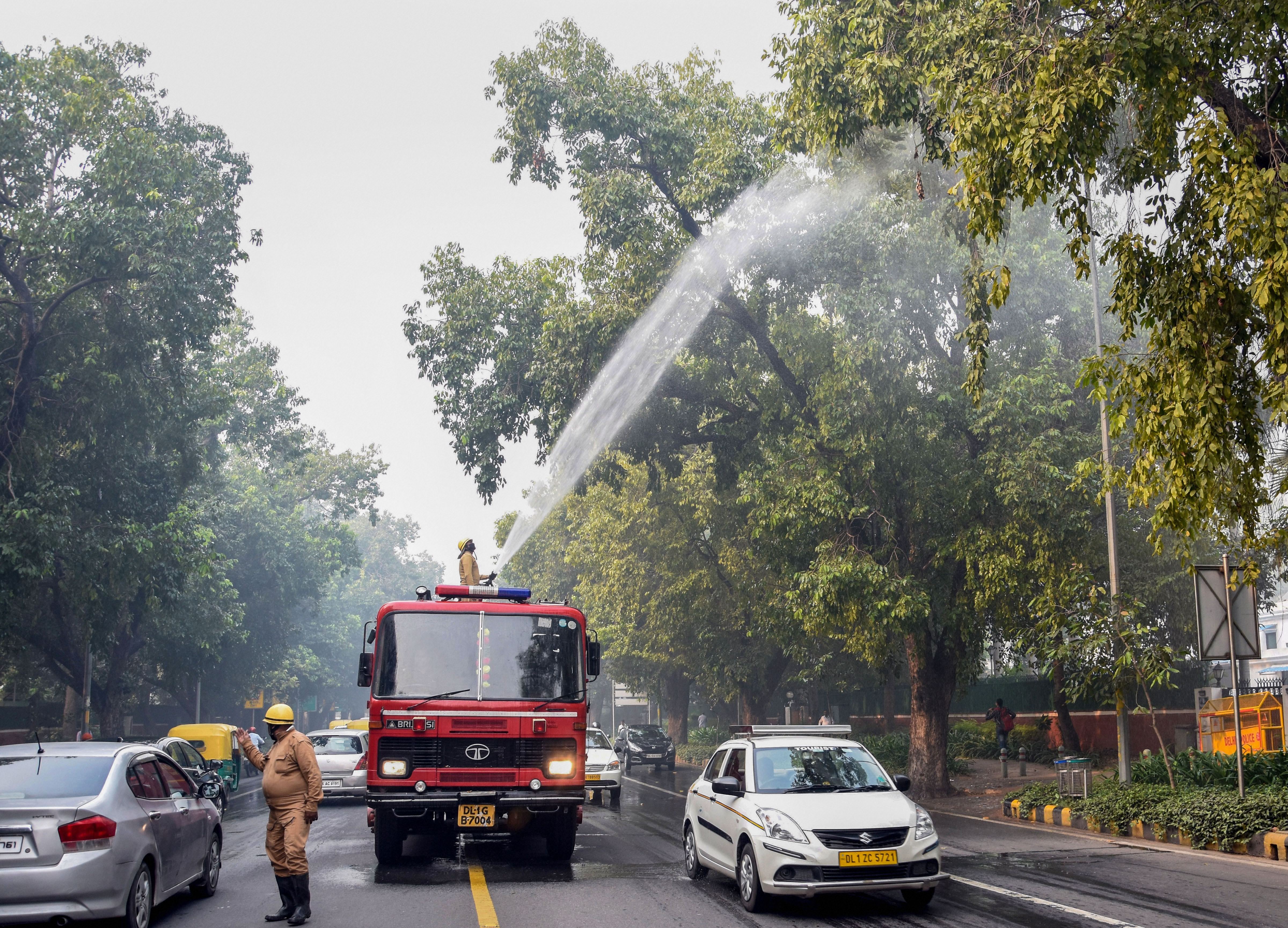 Delhi-NCR gasped for breath on Wednesday as the noxious smog resulting from raging farm fires and unfavourable weather pushed pollution levels in the region towards the 'emergency' zone for the second time in the last 15 days.

A large number of children were exposed to the harmful smog as schools remained open on Wednesday.

Pictures of schoolchildren with their faces covered with anti-pollution masks and handkerchiefs were shared widely on social media.

Scores of people also posted pictures of open burning of garbage and heaps of construction waste and dirt lying uncovered in several areas across the city.

'#DelhiAirPollution what's the use of being a developing country if our children are not permitted to breathe in clean air...Must think seriously about solutions as soon as possible before any emergency occurs.#DelhiAirEmergency,' a Twitter user posted on the microblogging site.

Many people questioned the effectiveness of the odd-even road rationing scheme, brought in by the Delhi government as an emergency measure to check pollution.

'How can common man survive in such envt. where AQI PM2.5 is crossing 500. I would like to ask both PM @narendramodi and Delhi CM @ArvindKejriwal Who is responsible for this mess, also odd even scheme doesn't seem to be working.#DelhiAirEmergency (sic),' another user said.

The odd-even scheme resumed on Wednesday after a two-day hold on restrictions in view of the 550th birth anniversary of Sikhism founder Guru Nanak.

According to weather experts, a fall in the temperature and wind speed led to the accumulation of pollutants. The problems were compounded by a cloud cover that blocked sunlight.

Incidents of stubble burning in Haryana and Punjab have increased and northwesterly winds have been bringing more farm fire plume to the Delhi-NCR region, they said.

According to the government's air quality monitor, Safar, the share of stubble burning in Delhi's pollution is predicted to be 22 per cent on Wednesday. It was 25 per cent on Tuesday.

A pungent smog lingered over Delhi-NCR for around a week after Diwali as a result of emissions from firecrackers, stubble burning and unfavourable weather.

A Supreme Court-mandated panel declared a public health emergency as air pollution neared the emergency levels on November 1 and the administration ordered closure of schools till November 5.

Last week, the apex court had pulled up the Centre and state governments for their inability to curb stubble burning in Punjab and Haryana and bring air pollution in Delhi under control. It had asked the governments if they feel ashamed that people are no longer safe even in their houses.

It had also ordered that all farmers be given a Rs 100 per quintal incentive to prevent them from setting their fields on fire in preparation for the next crop, and provide them free machines to get rid of the agriculture residue.

The period between October 15 and November 15 is considered critical for the region as maximum number of stubble burning incidents take place in this span in Punjab and adjoining states, which is one of the main reasons for alarming spike in pollution in Delhi-NCR.

Despite a ban on stubble burning in Punjab and Haryana, farmers continue to defy it amid alleged lack of financial incentives.

State governments are providing 50 to 80 per cent subsidy to farmers and cooperative societies to buy modern farm equipment for in-situ management of paddy straw, but farmers say use of machines increases the input cost manifold.

According to an affidavit filed by the Centre in the Supreme Court, Haryana, Punjab and Rajasthan distributed around 63,000 machines to farmers during 2018-19. In 2019-20, as many as 46,000 machines have been distributed.

Delhi environment minister Kailash Gahlot had on Monday said that there are around '27 lakh farmers in Punjab alone. If the same speed continues, it will take another 60 years for the machines to reach every farmer...It seems stubble burning will continue at the same pace next year too'.