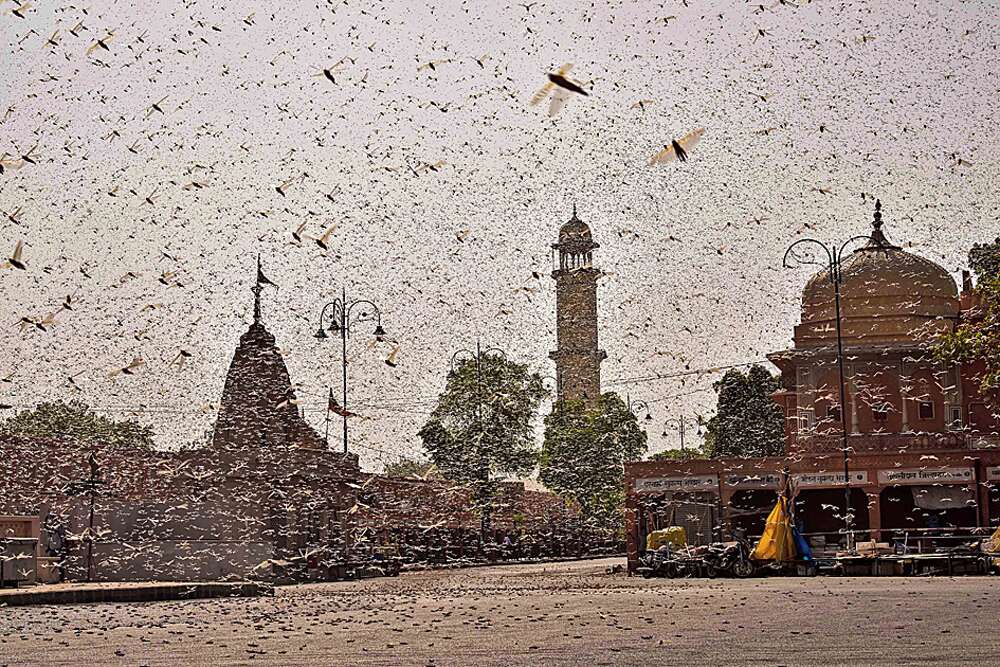 The Delhi government has asked authorities concerned to spray insecticides and pesticides on standing crops, vegetation, gardens and orchards to prevent a probable attack of desert locusts in Delhi.

Agriculture department joint director A. P. Saini in an advisory issued on Wednesday asked the authorities to organise awareness programmes for public and farmers to prevent the attack of locusts in the national capital.

'As the swarm of locusts flies in daytime, and rests during the night, it should not be allowed to rest at night,' the advisory read.

It asked the authorities to carry out spraying of pesticides chlorpyrifos and malathion.

Also, Delhi's forest department is considering covering the saplings in its nurseries with polythene to protect them against the desert locust attack.

'It is not possible to cover the trees. We will at least cover the saplings in the nurseries,' principal chief conservator of forests Ishwar Singh said.

'Covering plants with polythene can also be counter-productive during this heat. So, we will do this only when we know for sure that the swarm of locusts is headed towards Delhi,' the official said.

Singh said that in a city like Delhi, spraying of chemicals can be detrimental for environment.

'If we spray the vegetation, trees and plants with chemical in anticipation of a locust attack, we should also consider how dangerous it will be for the environment,' he said.

There are 14 lakh saplings in 14 government nurseries across Delhi, Singh said.

According to experts, broadly four species of locusts are found in India desert locust, migratory locust, Bombay locust and tree locust. The desert locust is considered the most destructive.

It multiplies very rapidly and is capable of covering 150kilometers in a day.

This insect, a type of a grasshopper, can eat more than its body weight. A one square kilometer of locust swarm containing around 40 million locusts can in a day eat as much food as 35,000 people.

Experts blame the growing menace of desert locusts on climate change. They say breeding of locusts is directly related to soil moisture and food availability.