Co-accused Shashi Singh was acquitted of all charges. 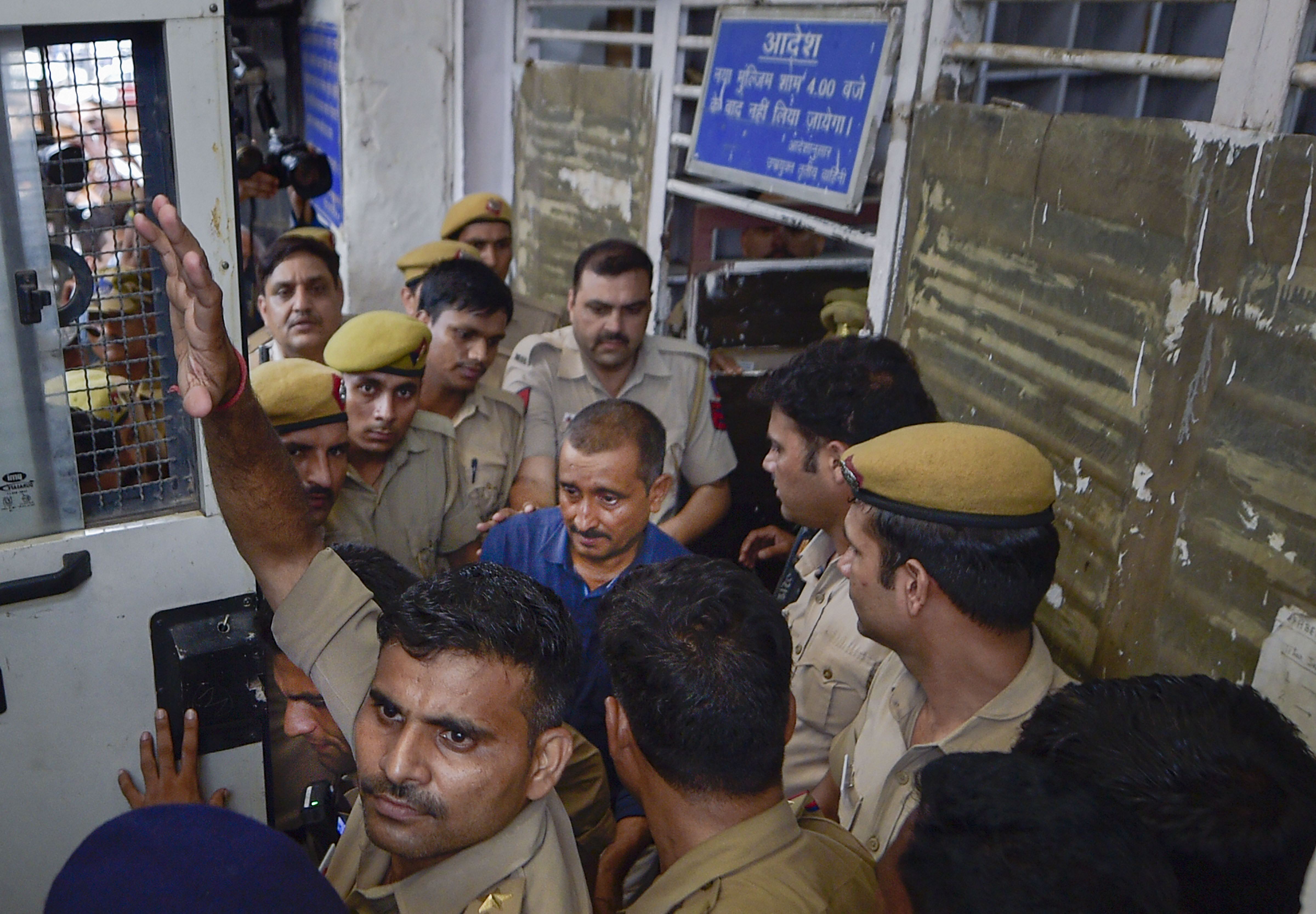 A Delhi court convicted expelled BJP MLA Kuldeep Singh Sengar on Monday for raping a woman in Unnao in 2017 saying the victim's testimony was 'truthful and unblemished' against a 'powerful person'.

The court convicted Sengar for rape under Indian Penal Code and Protection of Children from Sexual Offences (POCSO) Act for offence of a public servant committing penetrative sexual assault against a child.

The court will hear arguments on quantum on sentence on Wednesday. The offences entail maximum punishment of life imprisonment.

Convicting Sengar, 53, who broke down after the verdict was pronounced, the court said the CBI proved that the victim was a minor and was rightly prosecuted the special law.

'I found her statement truthful and unblemished that she was sexually assaulted. She was under threat, worried. She is a village girl, not from cosmopolitan educated area... Sengar was powerful person. So she took her time..,' the judge said while reading out the verdict.

When the judge started pronouncing the judgement, co-accused Singh fainted.

The court noted that after the victim wrote a letter to Uttar Pradesh chief minister Yogi Adityanath, several criminal cases were filed against her family and 'imprints of Sengar' were visible in them.

The court expressed surprise over the delay by the CBI in filing a chargesheet in the rape case and said it prolonged trial against Sengar and others.

Referring to the POCSO Act, which had come into being to impart expeditious justice involving children as victims of sexual assault, the court said there was 'nothing wrong' with law but its ineffective implementation on ground and lack of human approach of officers concerned led to a situation where justice was delayed.

It said that the CBI itself was not following the manual relating to investigation and prosecution.

The woman was allegedly kidnapped and raped by Sengar in 2017 when she was a minor.

Sengar, a four-time BJP MLA from UP's Bangermau, was expelled from the BJP in August 2019.

The court had on August 9 framed charges against him and Singh under Sections 120 b (criminal conspiracy), 363 (kidnapping), 366 (kidnapping or inducing a woman to compel for marriage), 376 (rape) and other relevant sections of the Protection of Children from Sexual Offences (POCSO) Act.

The trial in the high profile case was held in-camera after the Supreme Court transferred the matter from Unnao to the national capital.

The Unnao survivor must get justice