Major Dhoundiyal was killed in an encounter with JeM militants; Major Chitresh Bist died while defusing a mine 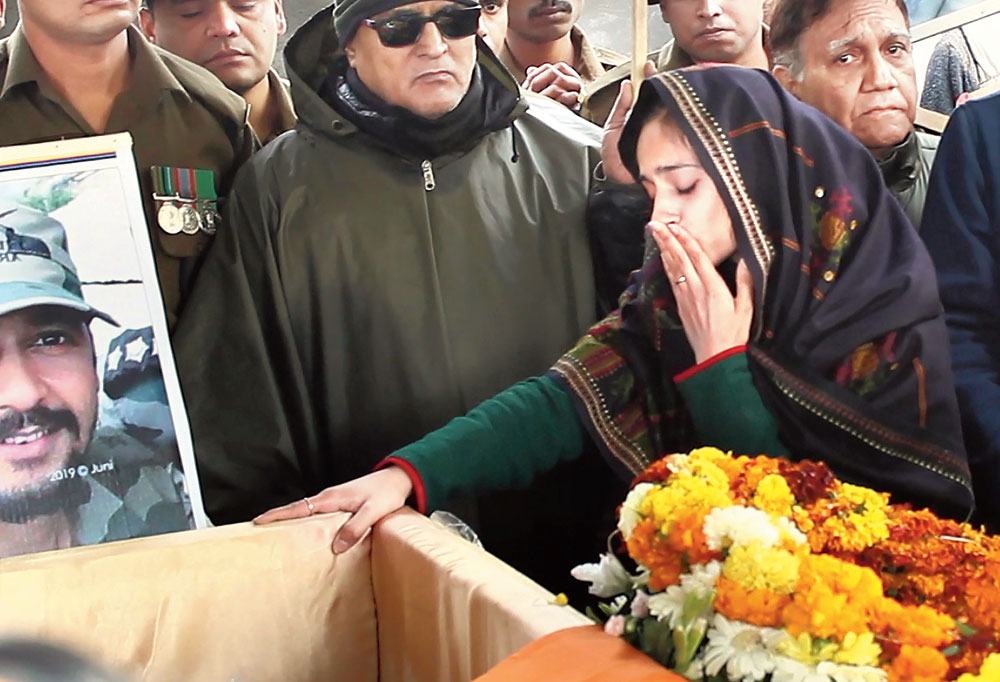 Major Vibhuti Shankar Dhoundiyal and Nikita Kaul had got married eight months ago. On Tuesday, Nikita led her husband’s funeral procession, saluted him and bid him adieu along with many others in Uttarakhand.

Major Dhoundiyal, 33, and three jawans were killed on Monday during an encounter with Jaish-e-Mohammad militants in Kashmir’s Pulwama. He is the second army officer from Dehradun to be killed in Kashmir in three days.

Major Chitresh Bist had died when a mine he was trying to defuse exploded in a border area of Rajouri district on February 16. Bist’s family had alleged that he didn’t have an explosive ordnance disposal suit, which is provided to members of bomb-disposal squads.

Jagdish Prasad Dhoundiyal, an uncle of the officer, performed his last rites in Haridwar, 52km south of Dehradun. The major’s father, Om Prakash Dhoundiyal, had died in 2012. His mother Saroj and youngest sister Vaishnavi live in Dehradun. Two elder sisters are married and live elsewhere.

“The officer had just begun having dinner on Monday evening when he received a call from his seniors asking him to lead an operation immediately. He left without finishing his dinner. I was supposed to accompany him. But he asked me to reach the spot with a different team,” Laxman Singh, a soldier who accompanied the body to Dehradun, said.

The funeral of another soldier killed in the operation in Pulwama was held in Meerut.

“The government should abrogate Article 370 of the Constitution that gives autonomy to Jammu and Kashmir,” Veerpal said. “Our politicians are weak and they only want votes,” he added.

“I am proud of my son, but want to ask the government how long will you keep returning us our dead soldiers?” the father said.

Arav Kumar, Ajay’s three-year-old son, performed the last rites. Ajay’s wife Dimple said: “He had called me a day before (he died) and said everything was fine.”