Defence crumbles on deal with Dassault

At stake: Much more than what govt has been highlighting about Rafale 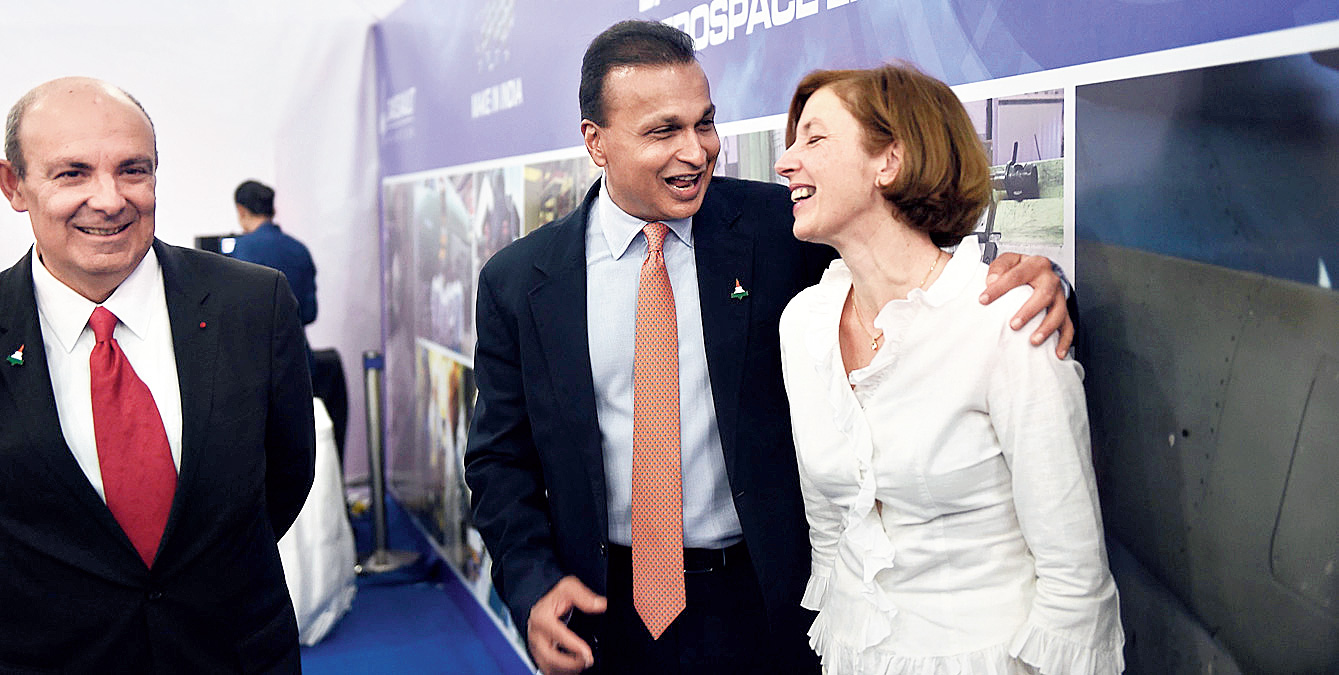 A statement available in the public domain has struck at the root of the message the Narendra Modi government has tried to convey by insisting that Anil Ambani’s Reliance group is merely one among the several offset suppliers to Dassault and that the Indian company has nothing to do with the Rafale fighter planes.

The Indian government, whose stand was articulated by finance minister Arun Jaitley on Sunday, is technically correct because it had confined itself to the 2016 contract that apparently deals with only 36 readymade Rafales.

However, the Modi government has never explicitly made public the road map after the 36 planes are delivered, especially since the original UPA order was for 126 Rafale fighters. On Saturday, law minister Ravi Shankar Prasad had said: “Thirty-six will come from there (France), the rest will be made here.” No specific number was mentioned.

The number of planes is crucial not merely because the Indian Air Force needs them badly. The government’s entire defence on shutting out the state-run HAL, and Dassault picking Reliance Defence and Aerospace as a partner hinges on the contention that none of the 36 planes will be made in India.

What about life after the 36?

Some clarity has been provided by Dassault and the picture changes dramatically. Dassault has big plans for Dassault Reliance Aerospace Ltd (Dral), the joint venture with Anil Ambani’s Reliance, which escalates the significance of former French President Francois Hollande’s revelation.

If the Indian leadership indeed passed on to the French the name of Anil Ambani’s Reliance, it was doing a favour not to “one company (that) happens to be an offset supplier” (as Jaitley described Reliance) but to a key player in a partnership with grand plans. Dassault also appears to have set its sights on orders for over 200 fighter planes.

The information has been made public by Dassault itself. On July 19 this year, Dassault chief executive officer Eric Trappier told a media conference after announcing its first-half results: “We’ve chosen the site in Nagpur. We are allied with Reliance. We’ve set up a joint venture…. The construction of the hangar is under way and we are training the future people who will be manufacturing these parts, whether these are parts of Falcons or Rafales. We hope to obtain the first parts at the end of the year.”

Trappier said “whether these are parts of Falcons or Rafales” (stress added by The Telegraph). The Falcon is a civilian aircraft, a business jet targeted at the super rich.

The statement can mean only one thing: Dassault is angling for more Rafale orders from India. After the 36 are delivered in flyaway condition, the plan could be to assemble Rafales in India.

The statement also makes it clear that the Nagpur facility, being set up in partnership with Anil Ambani’s Reliance, will be “manufacturing” the components of Rafale planes.

This was not the first time the information was being made public. But the timing is significant.

Trappier made the statement on July 19, when the Rafale deal had already turned controversial in India even before Hollande dropped his bombshell a little over two months later. Trappier’s assertion suggests that the plans are very much alive and they have not been shelved because of the controversy.

Trappier told reporters on July 19: “On the Rafale export, well, I can’t say much. We have already sold to India. We hope to sell more (stress added) to India. We’ll have to work on this….”

On Sunday — two days after Hollande made the explosive claim — Jaitley had confined himself to the 36 planes, probably because nothing else has been signed yet or he is not privy to other discussions, if any.

In an interview to ANI, Jaitley had asked: “Now merely because one company happens to be an offset supplier, how is that a scandal?”

(Offset suppliers are local firms from which the original equipment manufacturer, in this case Dassault, makes purchases worth a certain percentage of the total value of the defence deal. The purchases from local suppliers can even be non-defence items.)

Jaitley had added: “They are not interested in manufacture of Rafale aircraft because none is going to be manufactured under the 2016 contract in India. Readymade aircraft are going to come in. They are only going to be offset suppliers.”

Jaitley also dwelt at length on the word “partnership”. “The (36) aircraft are to be manufactured and weaponised in France…. Where is the question of Dassault having a partner in India? Partner is when for manufacturing or for any other activity relating to these 36 aircraft, you require something to be done in India. There is absolutely nothing to be done in India…. So when the former French President uses the word ‘partnership’, he does not seem to remember what the basics of the contract were.”

Reliance Defence and Aerospace had also earlier said “no contract has been given to any Reliance Group company by the ministry of defence related to the purchase of the 36 Rafale aircraft”.

While Jaitley and Reliance may be sticking to facts on the 36 planes, Trappier’s statements make it clear that Dassault is looking far beyond the 36 fighters. The French firm is also treating Reliance as a partner, not just a supplier.

The joint venture (Dral) facility is more than a mere “offsets” facility. When the foundation of the plant was laid, Trappier had brought along a delegation from the Groupement des Industries Francaises Aeronautiques et Spatiales (GIFAS) — a consortium of aerospace companies in France — who are negotiating deals for units at the same site with Indian partners. It is clear that these are vendors and suppliers for the Rafale production facility in India.

It is a significant “if”. With such a large order at stake, can Dassault and the French government be expected to contradict the Modi government in any way and endanger the future orders? Against the backdrop of such a question, should Jaitley have cited the carefully crafted statements of the French government and Dassault as clean chits? On April 13, 2015, the then defence minister and BJP leader Manohar Parrikar told Doordarshan on the Rafale deal that was finalised three days earlier: “Modiji took the decision, I back it up.” The Prime Minister must speak because few else in India appear to know much about what transpired between Modi and Hollande from April 8 to 10, 2015, in Paris.