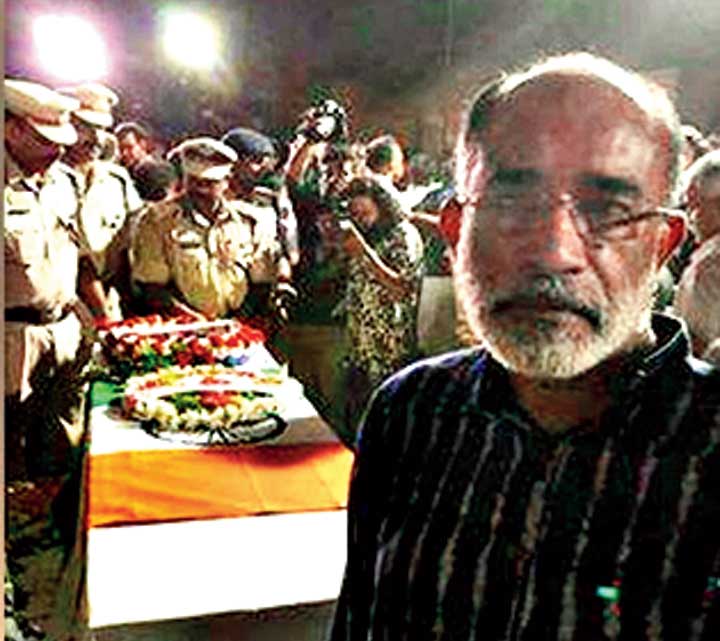 Union minister Alphons Kannanthanam has faced sharp criticism after he posted on social media a picture of him with the body of a slain Pulwama soldier in a casket in the background, forcing him to delete the uploads.

Many accused the junior culture and tourism minister of clicking a selfie with the body of Vasanth Kumar V.V., who was among the 40 CRPF personnel killed in Thursday’s suicide bomb attack at Kashmir’s Pulwama, after the casket arrived in the soldier’s native state of Kerala on Saturday. Kannanthanam denied that he had taken a selfie and said someone else had clicked it.

Kannanthanam, who hails from Kerala, had posted the picture on Twitter and Facebook with different captions. The picture shows him looking into the camera with the Tricolour-draped casket in the backdrop.

“Goodbye Martyr Vasanthkumar. We are all alive because of you,” he captioned the tweeted picture.

Kannanthanam had also uploaded pictures of the casket after its arrival at Kozhikode airport and mentioning in the caption that he would accompany the body to Wayanad, from where Vasanth hailed.

The BJP has instructed its ministers and leaders to receive the bodies of the deceased soldiers in their respective states, emulating Union home minister Rajnath Singh who carried the coffin of one of the soldiers in Srinagar. Other than Kannanthanam, a large number of officials, elected representatives and residents took part in Vasanth’s funeral.

Shan Shakir tweeted: “What a shame Alphonce (sic) Kannanthanam. Taking a selfie in front of our soldiers dead body.”

“Sir, you should have used a better camera for this selfie, can’t see the shame on your face,” tweeted Paresh.

Balu Sunil tweeted: “Moral of the story: Cracking civil service is no benchmark for anything.” Kannanthanam is a retired bureaucrat.

Bijoy was more sarcastic, making an apparent reference to Prime Minister Narendra Modi, who is often part of selfies. “Narcissism at its Peak. This #Proverb suits. As the King so is the Minister.”

Kannanthanam deleted the post from Twitter and Facebook following the fury, and issued a clarification on Sunday. “Someone clicked the picture after I paid my respects to the martyred soldier at his home, and sent it to my office that handles my social media (accounts),” he said on Sunday.

“A careful examination would reveal that it was not a selfie. Not only that, I don’t take selfies,” the minister said.

Along with the clarification, Kannanthanam posted a picture of him placing a wreath on the casket. “Nation grieves for Havildar Vasanthakumar,” the picture was captioned.

Kannanthanam is not new to controversies linked to photographs. Last August, at the peak of the devastating floods that left hundreds dead and thousands homeless in Kerala, he had posted a set of pictures that instantly fuelled roll-on-the-floor mirth.

In the pictures, Kannanthanam, wearing jeans and a blue T-shirt, was seen sleeping on just a bedsheet with a white pillow for support at SB High School in Changanasserry, Kottayam district.

While the intent of the post was perhaps to highlight his simple and hard-working ways during relief operations, people found it outright funny. Many questioned how he could post the photos while being fast asleep.

“Sir, one eye is fully shut in that third photo,” wrote a Twitter user.

“It’s our luck that we got a minister like you who can post on social media while asleep,” read another of the 16,000 comments. Kannanthanam has not deleted the posts.