Since they enter hospital premises and eat at roadside dhabas, they get exposed to the virus but they are yet to be tagged as front-line workers in the fight 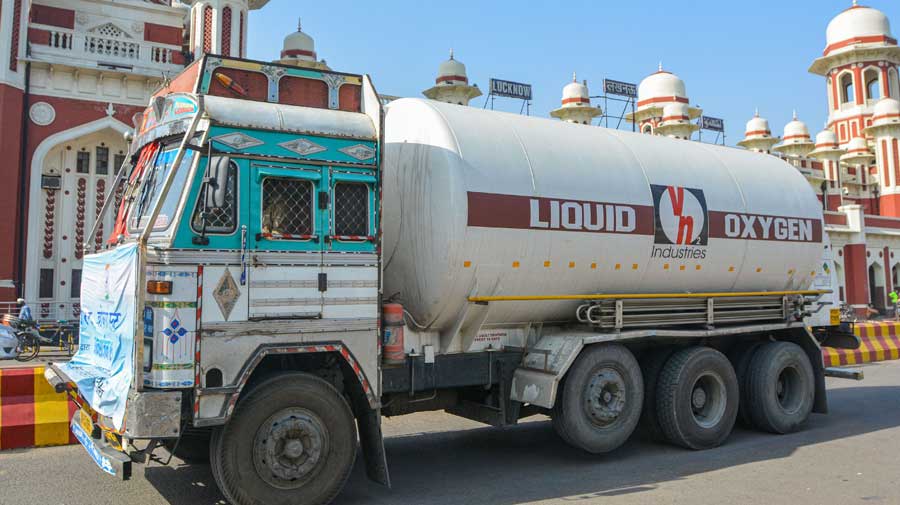 It will take six to seven days for both the drivers to bring back the gas for supply to hospitals in Calcutta.

Aitiana, president, Bulk LPG Transport Contractors Association, East India, said he usually deals with transport of LPG. However, the  Bengal government sought his help for deputing drivers for oxygen. The state government does not have adequate trained drivers to do this job.

“The drivers of oxygen tanker trucks are highly trained drivers. They travel long distances. Since they have to deliver this life supporting gas at the earliest, they work tirelessly. Now their work pressure is much higher,” Aitiana said.

Oxygen is transported in tankers mounted on trucks.

Since the drivers enter hospital premises and also eat at roadside dhabas, they get exposed to Covid virus. However, these drivers are yet to be tagged as frontline workers in the fight against Covid.

All India Motor Transport Congress (AITC), an apex organisation of transporters, last year demanded to the central government to consider the tanker drivers as frontline workers, cover them under insurance and prioritise their vaccination.

“The government discussed the demand. The transport ministry was in favour of it. But somewhere it was rejected,” said Naveen Kumar Gupta, secretary general of AITC.

Gupta said there are about 1,000 oxygen tankers available within the country. These are not enough to meet the current demand, he added.

“The work of drivers has increased hugely in the last 15 days because of the increase in demand,” the official said.

All India Road Transport Workers’ Federation general secretary K.K. Divakaran said the truck drivers, including those carrying tankers, work up to 15 hours a day. There should be rules to allow them to up to eight hours a day. According to the Factories Act, the normal working period is eight hours a day. Besides, they do not get work for 40 per cent of days.

“The central government must come up with a policy to ensure compensation is paid to the drivers for the period they have no work. Besides, the government must ensure free treatment for their family members and social security. They are the lifeline of the nation,” Divakaran said.

Only a few states like Kerala and Tamil Nadu provide food assistance to drivers’ families in the Covid period. Other states should follow it, he said.