The increase would provide an additional yearly amount of Rs 2,000 to a worker and benefit approximately 13.62 crore people 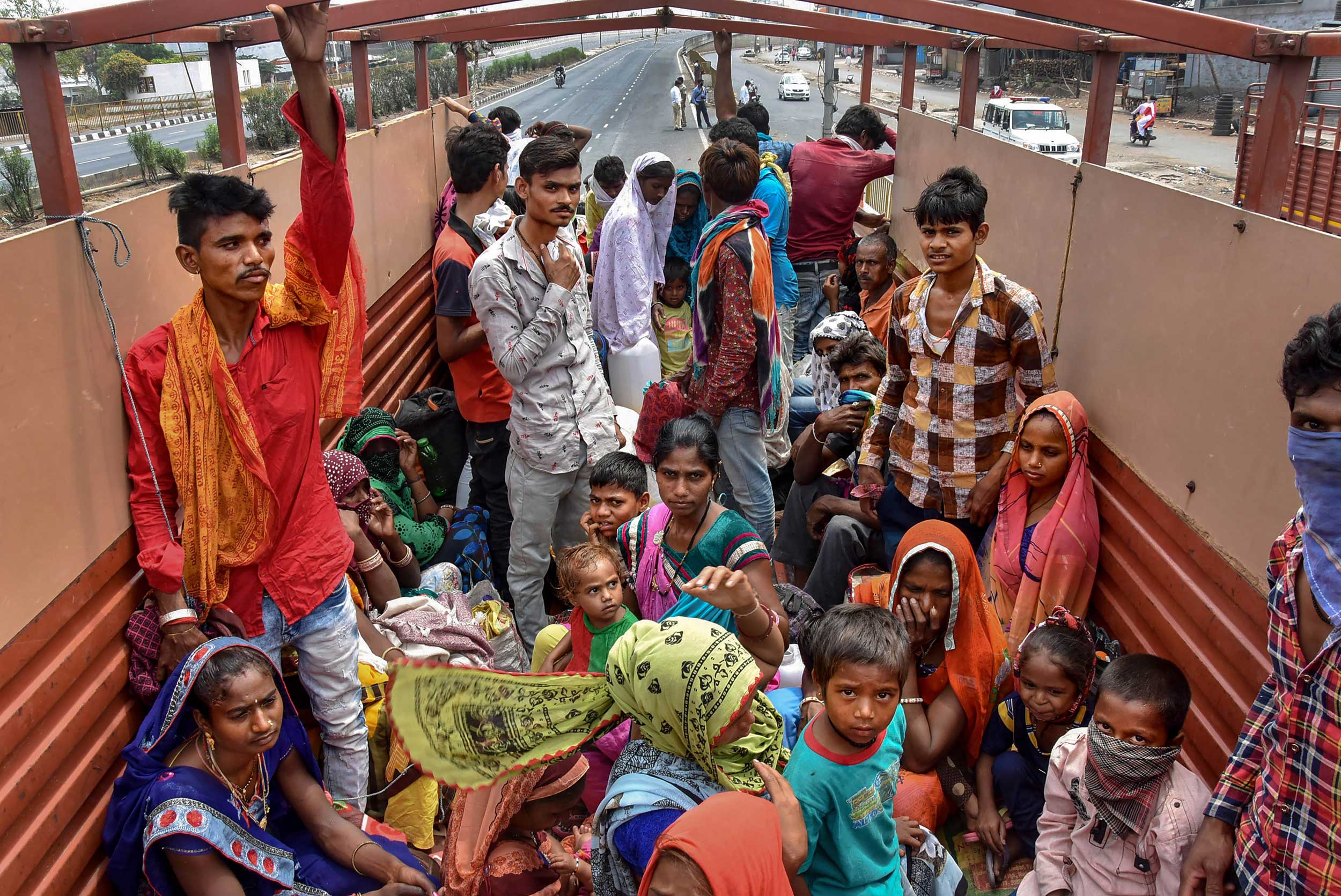 Migrant workers board a truck to return to their villages after the 21-day nationwide lockdown was imposed by the government in Surat on Thursday.
(PTI)
Basant Kumar Mohanty   |   New Delhi   |   Published 26.03.20, 09:52 PM

The relief package the government announced on Thursday to help the poor affected by the Covid-19 lockdown includes the yearly revision of wages notified earlier this week under the rural job scheme MGNREGA, a routine exercise that social activists said was over a decade old.

The activists said the projection of this routine indexation to neutralise the effects of inflation as part of the Prime Minister’s Garib Kalyan Package of Rs 1.7 lakh crore — which finance minister Nirmala Sitharaman announced — was “misleading”.

A statement from the Press Information Bureau (PIB) said the MGNREGA wage rate under the government package would be increased by Rs 20 a day with effect from April 1.

The increase would provide an additional yearly amount of Rs 2,000 to a worker and benefit approximately 13.62 crore people, it said.

The Mahatma Gandhi National Rural Employment Guarantee Act provides for up to 100 days’ work in a year to every rural household as well as revision of the wage rates.

The rural development ministry revises the wages every year, following a formula based on the Consumer Price Index for Agricultural Labourer (CPI-AL).

The new wage rate — to be effective from April — was notified on Monday.

According to the new rates, the increase in daily wages will be in the range of Rs 13 to Rs 32. While MGNREGA workers in Bengal, Tripura and Sikkim will get Rs 204 for a day’s labour, up from the Rs 191 they have been getting, those in Maharashtra will get Rs 238, an increase of Rs 32 from Rs 206.

Workers in Jharkhand and Bihar will get Rs 194 a day, compared with the Rs 171 they now receive.

“For the government to say the MGNREGA wage revision is part of the relief package is misleading. This routine indexation to neutralise inflation is being done for over a decade, effective from April 1 every year,” social activist Nikhil Dey said.

In 2015, a government-appointed expert committee headed by economist Mahendra Dev had recommended that the basis for the revision formula be changed from the CPI-AL to CPI-Rural, which gives a balanced weightage to food and non-food items.

Another committee of bureaucrats had supported the recommendation, but it has not been implemented yet.

Both committees had found that the CPI-AL formula used 30-year-old tools, with the base year for the CPI-AL series being 1986-87, and that it gave around 40 per cent of the weightage to families’ expenditure on cereals on the ground that rural people had a high intake of rice or wheat.

The food consumption pattern has since changed but the basket of consumption items has not been revised yet.

Alakh N. Sharma, economist and director of the Institute for Human Development (IHD), a think tank, said informal workers would lose about 40 to 50 days of work because of the Covid-19 crisis.

“Each worker stands to lose Rs 12,000 to Rs 15,000 in wages during this period. We have written to the government to transfer to them Rs 3,000 a month for three months. The government has ignored it. The revision of the MGNREGA wage was due. This package is inadequate,” Sharma said.

Sharma was not talking about only MGNREGA workers but all those in the informal sector, taking an average daily income of Rs 300.

Dey said that MGNREGA workers cannot step out during the lockdown, which means they stand to lose out on the benefits of the routine increase in wages, at least for a while.

Sharma said the government should have put a moratorium on the payment of interest on loans.

“Small and medium-scale industries may be unable to pay salaries. The government needs to put a moratorium on interest payment on loans.”