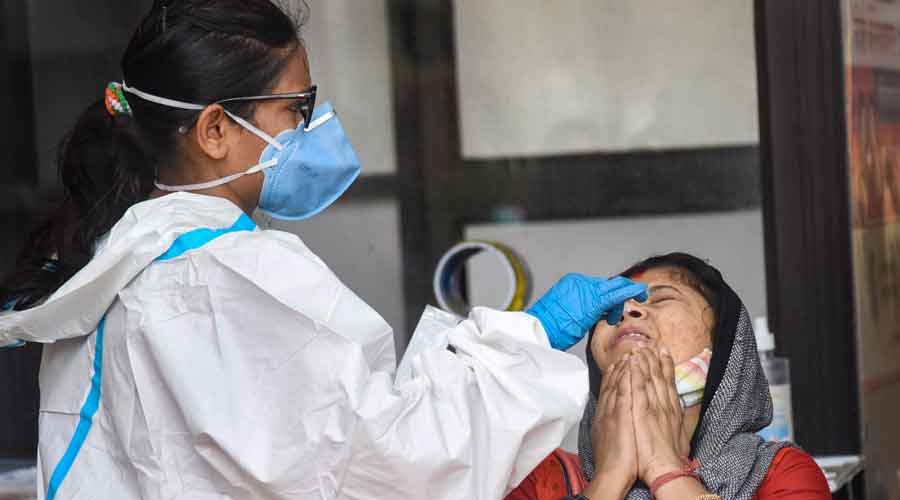 A Covid-afflicted elderly former armyman died gasping for breath on a scorching day in Patna as a premier government hospital in the Bihar capital allegedly dithered on admitting him because the authorities were busy welcoming the health minister.

Former jawan Vinod Kumar Singh, 60, a native of Lakhisarai district, had been brought to Nalanda Medical College and Hospital (NMCH) in an ambulance on Tuesday afternoon when health minister and BJP leader Mangal Pandey arrived there to inspect the facilities.

Vinod’s family members said he was kept waiting for one-and-a-half hours in the vehicle outside the hospital and repeated requests to admit him fell on deaf ears.

“We had first taken my father to the All India Institute of Medical Sciences (AIIMS), Patna, but the people there said there were no beds. We then rushed to the NMCH, but the ambulance was kept waiting for one-and-a-half hours as everybody was busy welcoming the health minister,” said Abhimanyu Singh, son of the deceased ex-armyman.

Weeping inconsolably, Abhimanyu added that he kept requesting the hospital authorities to admit his father and start the treatment .

“I kept begging them to quickly admit him as the vehicle was standing under the scorching sun. It was very hot outside and my father was in a serious condition. He was having difficulty in breathing. I begged them to at least shift my father to the verandah, but the officials stopped me and said the health minister was coming. My father died before my eyes,” Abhimanyu said as his mother wailed beside the body of her husband.

Health minister Pandey arrived soon. When reporters asked him about the death of the Covid patient, he said: “We are trying to provide better health facilities. The number (of patients) in the hospitals has suddenly shot up over the past few days…  Any death is sad and unfortunate because our doctors and health workers are working day and night to save lives. Any incident like this is surely painful.”

NMCH superintendent Binod Kumar Singh refuted the allegations. “All of us were not busy in welcoming the minister. Only my deputy superintendent and I were involved in it. Our other doctors were working. They saw the patient. He (Vinod) had been brought dead,” he said.

“The reaction of the family members after his death was exaggerated,” he added.

Bihar is witnessing an explosion in Covid cases. There are over 20,000 active cases and beds at prominent government hospitals are already full.