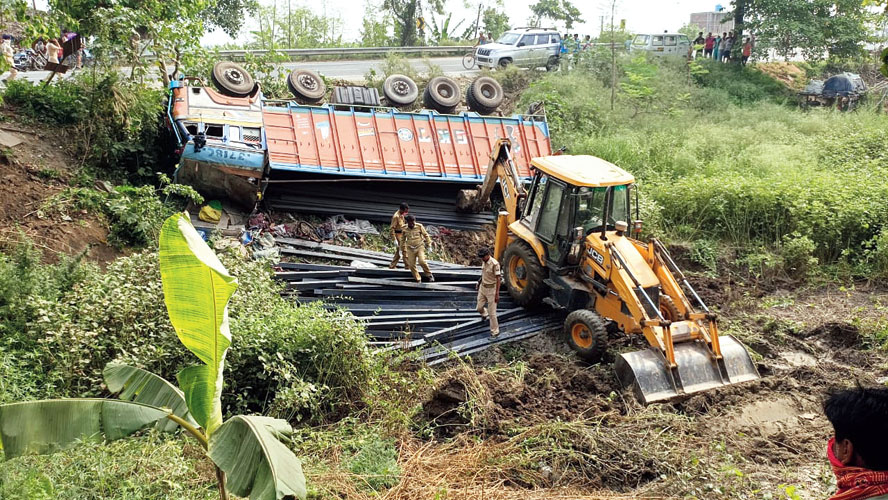 Police personnel extricate bodies from the ditch in which the truck fell in Naugachhia in Bihar’s Bhagalpur district on Tuesday.
Picture by Sanjay Choudhary
Dev Raj   |   Patna   |   Published 19.05.20, 09:42 PM

Nine labourers heading home to Bihar from Calcutta died on Tuesday when the truck they had hitched a ride in collided head-on with a bus in Bhagalpur district in another highway tragedy involving migrant workers.

Several passengers in the bus, carrying another group of migrants who had returned from Karnataka, were injured in the 6am crash.

The accident happened on National Highway 31 near Ambho village in Naugachhia. All the nine dead migrants were in the truck loaded with steel pillars and beams.

On Saturday, a collision on an Uttar Pradesh highway between two trucks carrying migrant workers home had left 25 people dead, including several from Bengal.

Police in Bhagalpur said the drivers of the bus and the truck, both traveling at high speed, had swerved to different sides of the highway but couldn’t avert the collision, the impact sending the truck tumbling down into a roadside ditch.

“Nine labourers were sitting in the truck. They all came under the heavy iron pillars and beams and lost their lives. Some passengers in the bus suffered minor injuries,” Naugachhia superintendent of police (SP) Nidhi Rani told The Telegraph.

According to the police, all the labourers in the truck were cycling home from Calcutta to beat the Covid lockdown and had boarded the truck at some point of their journey. The police later found their bicycles lying mangled and twisted along with their belongings kept in bags.

“We have identified six of the deceased labourers so far. They are from East Champaran and West Champaran districts. Three are still unidentified,” Nidhi said. The two districts are over 700km from Calcutta.

The driver and the helper of the truck fled after the accident and the police are looking for them.

The bus was carrying around 40 migrant workers who had arrived in Bihar by a Shramik Special train to Darbhanga from Bangalore and were being taken to different quarantine centres in Banka district.

Chief minister Nitish Kumar announced a compensation of Rs 4 lakh for the next of kin of each of the deceased and has directed the district administration to ensure that the injured bus passengers get proper treatment.

The Janata Dal United leader also appealed to migrant workers to be patient and not to travel in trucks, on foot or by other vehicles as his government was committed to bringing all stranded migrants from Bihar back to the state.