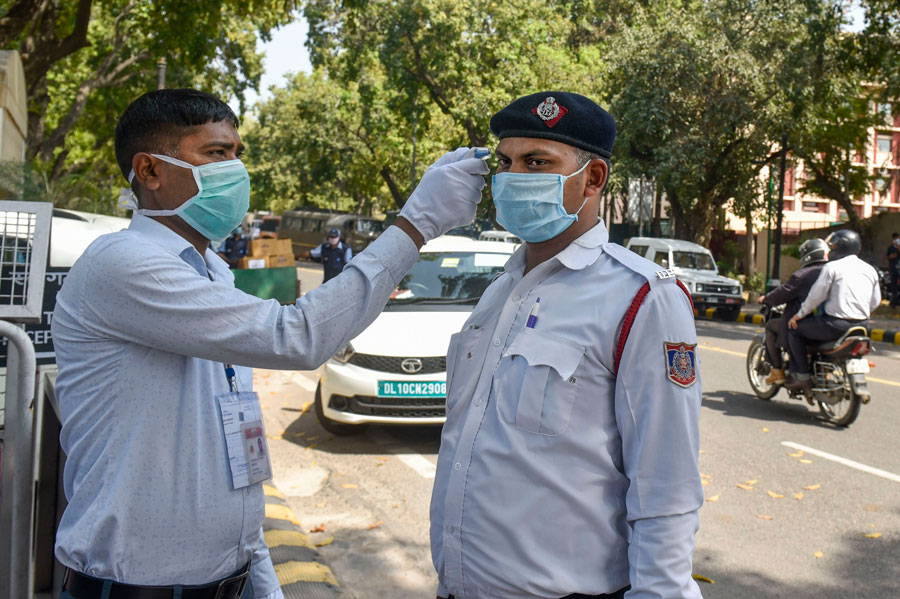 India would need to detect and quarantine half of all patients infected by the novel coronavirus within three days of them developing symptoms to reduce its cumulative patients’ numbers through the epidemic by 62 per cent, health researchers said on Monday amid rising counts.

Their study released by the Indian Council of Medical Research has for the first time quantified the challenge the country faces as it battles to curb the spread of the virus through airport screening, expanded testing, travel curbs and lockdowns.

On Tuesday, the Brihanmumbai Municipal Corporation reported that a 65-year-old coronavirus patient has died, taking the death toll due to COVID-19 to three in the metropolis. Delhi, however, said no new cases have been reported in the past 34 hours.

All 28 states and eight Union Territories in the country are now under full or partial lockdowns.

The Union health ministry on Monday recorded 72 fresh cases and two more deaths, raising the cumulative confirmed cases to 468, including 35 who have recovered and nine dead.

The ICMR approved two test kits for use by government and private labs. Around 100 government labs and 12 private labs — one each in Delhi, Gujarat and Karnataka, two each in Haryana and Tamil Nadu, and five in Maharashtra — are currently approved to test for the coronavirus. More private labs are expected to be approved in the coming days.

The study by researchers at the ICMR’s National Institute of Epidemiology, Chennai, has underscored the need for rapid, expanded testing and quarantine of cases to reduce the impact of the epidemic on the country.

The NIE analysis — forecasts based on mathematics — has suggested that finding and imposing quarantine on 50 per cent of symptomatic patients within three days of them developing symptoms would reduce the total number of infected patients by 62 per cent.

“A 90 per cent lowered peak prevalence would minimise the pressure on public health services,” Tarun Bhatnagar, a senior scientist at the NIE who led the study, told The Telegraph.

However, the study also underscores the limitations of actions. Even after achieving the 50 per cent quarantine within three days target, the proportion of averted infections would be 62 per cent — implying tens of thousands of patients might need hospitalisation.

Bhatnagar and his colleagues have not attempted to forecast the size of the epidemic in India — as other research groups have tried to do. “We thought we would initially focus on what interventions to take,” Bhatnagar said.

Medical researchers who were not associated with the NIE study said the findings highlight the need to expand testing across India to detect patients even while vast swathes of the country remain under travel curbs and lockdowns to prevent further spread of the virus.

“Our restrictions on testing could hurt us,” Oommen John, a public health researcher at The George Institute for Global Health, New Delhi, said. “Even now, testing is limited to only persons with fever, cough or shortness of breath. But many patients have much milder symptoms.”

John, among others, suspects that the numbers detected do not reflect the true scale of the epidemic in the country. “We have deaths across several states, but the numbers of patients appear concentrated only in Maharashtra and Kerala — this could be a reflection of better surveillance systems in these states.”

Forecasts for the size of India’s epidemic by two independent research groups in the US have predicted different numbers over different timelines. But both have pointed to the need for sustained travel bans, social distancing and lockdowns to prevent the number of patients from overwhelming the country’s critical care beds and ventilators.

A study by scientists at the University of Michigan has suggested that with the strongest of such restrictions, India could keep its infections at 1 per 100,000 population, or around 13,800 cases by mid-May. With only travel curbs and social distancing but no lockdowns, the number could rise to over 55,000 cases by mid-May.

“Those numbers are likely underestimates. They were based on data until March 16, when we updated it with data until March 21, our projections increased substantially,” Bhramar Mukherjee, the epidemiologist who led the Michigan study, said.

An independent study by the Center for Disease Dynamics, Economics & Policy, a think tank in the US, has suggested that without interventions two to four million persons might require hospitalisation over the next three months.

Coronavirus crisis: 70 drugs up for testing

WHO warns: Virus is accelerating