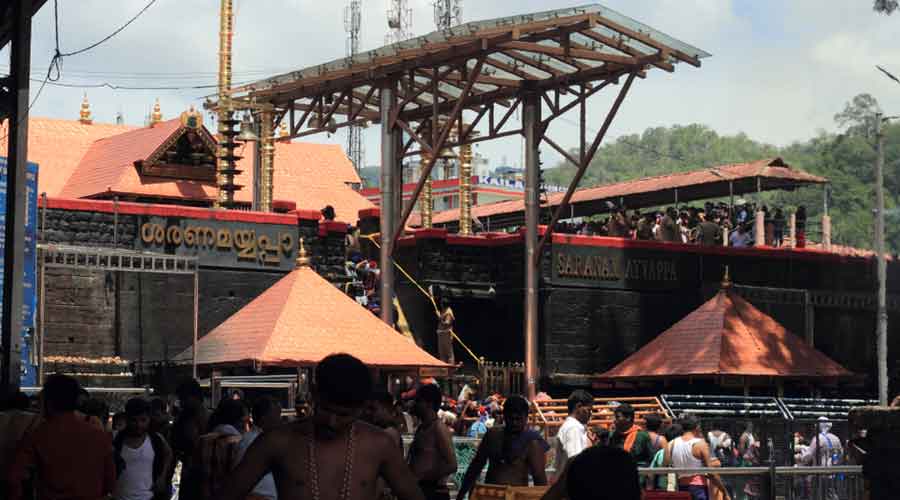 The draft bill points out that since the presiding deity, Swami Ayyappan, is a “perpetual celibate”, women of childbearing age must not enter the hill shrine.
File picture
K.M. Rakesh   |   Bangalore   |   Published 08.02.21, 12:59 AM

The Congress-led United Democratic Front in Kerala has released the draft of a bill that seeks to punish with a two-year jail term women aged between 10 and 50 years for entering the Sabarimala temple, raking up the contentious issue before the Assembly elections.

The draft bill, which the Congress plans to sign into law if it comes to power, points out that since the presiding deity, Swami Ayyappan, is a “perpetual celibate”, women of childbearing age must not enter the hill shrine.

The Left reacted cautiously over the emotive issue but accused the Congress of conning people with a “fake bill”.

Radhakrishnan, a former minister, said the draft titled Sabarimala Ayyappa Devotees (Protection of religious rights, customs and usages) Bill, 2021, would be enacted once the UDF comes to power in the state polls this summer.

“They (the Left Democratic Front) allowed women to enter the sanctum sanctorum. So how can we trust them?” Radhakrishnan said.

There has never been a law banning women of childbearing age from entering the Sabarimala temple. However, convention has prevented women of this category from stepping into the shrine. As per the draft bill, the last word on the temple’s customs would be that of the chief priest.

The Sabarimala issue has once again gained traction in the UDF with leader of the Opposition Ramesh Chennithala embarking on an “Aishwarya Kerala Yatra” — a pre-poll march across the state to galvanise his party and mobilise support. There are indications that the UDF will use Sabarimala as a poll plank, and slogans in reverence of the deity have been raised at the march.

Women’s entry was pitchforked into mainstream political debate and widespread protests were held when the Left Democratic Front (LDF) government decided to implement a September 2018 Supreme Court verdict that lifted all age barriers for women worshippers wanting to visit the temple.

Although both the BJP and the Congress had initially welcomed the verdict, they made a quick turnaround, smelling a political opportunity since the 2019 Lok Sabha elections had been just months away.

In keeping with its decision to implement the court order, the Left government deployed massive security at the temple. But allowing police escort for 31-year-old social activist Rehana Fathima to the temple led to massive outrage among traditionalists who wanted status quo.

Eventually two women of childbearing age, Bindu Ammini and Kanakadurga — aged 42 and 44 — managed to enter the sanctum sanctorum escorted by the police in the cover of darkness on January 2, 2019, more than three months after the apex court’s order.

In the ensuing Lok Sabha polls, the UDF registered a near clean sweep, winning 19 of the 20 seats and leaving just one to the LDF in what was widely interpreted as the result of the state government’s insistence on implementing the court order.

Chennithala told reporters on Saturday that the Centre and the state had failed to live up to the expectations of Sabarimala devotees.

“The Supreme Court verdict had hurt the sentiments of the believers. Yet, neither the Centre nor the state government tried to bring a legislation against the entry of women (of childbearing age),” the Congress leader said.

Organising secretary of the All India Congress Committee, K.C. Venugopal, clarified that his party was not trying to whip up sentiments. “Sabarimala is already a major issue. We don’t have to deliberately make it into a big issue,” he told reporters, accusing the LDF of allowing non-believers into the temple.

“This government had pushed non-believers into Sabarimala with the help of the police and hurt the religious sentiments of scores of believers,” Venugopal said.

CPM politburo member S. Ramachandran told a news channel that his party’s position was that “the matter should be solved through discussions with all concerned”.

After having burnt its fingers by implementing the court order, the LDF had since backed off from its earlier position. The state government had decided to put the implementation on hold until further clarity since review petitions have been referred to a larger bench of the apex court.

LDF convener and state CPM acting secretary A. Vijayaraghavan slammed the UDF for “conning” the people with a “fake bill”.

“This is a fake bill and the Congress is conning the people. The government can only act according to the court order,” he told reporters.

“The CPM’s stand is very clear and we have already put it in black and white. We will go by whatever the court decides,” he said.