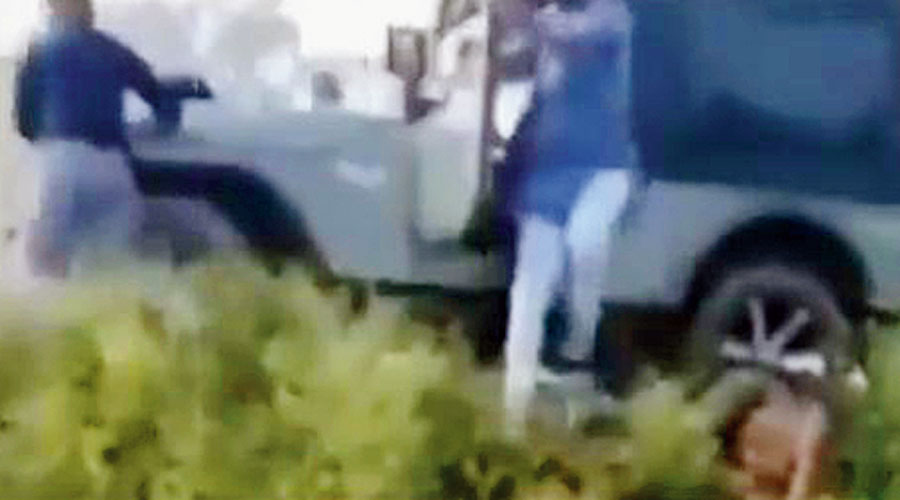 The Congress on Friday demanded the immediate dismissal of Minister of State for Home Ajay Mishra, arrest of his son Ashish and setting up of a commission of two sitting judges so that farmers killed in Lakhimpur Kheri violence get justice within 30 days.

It also urged Prime Minister Narendra Modi to follow 'raj dharma' by ensuring that all those accused in the killing of farmers during the violence on Sunday are arrested.

Violence had broken out on Sunday after two SUVs allegedly ran over a group of anti-farm law protesters who were demonstrating against the visit of Uttar Pradesh Deputy Chief Minister Keshav Prasad Maurya at Tikonia-Banbirpur road in Lakhimpur Kheri. Eight people were killed in the violence which included four farmers.

Ashish was asked by the police to appear before it at 10 am Friday, but he skipped the summons.

The MoS Home has, however, claimed that neither his son nor he was present at the site when the violence in Lakhimpur Kheri erupted on Sunday that led to the death of eight people, including four farmers.

Congress chief spokesperson Randeep Surjewala alleged that going by the Supreme Court's observations on Friday, "it has become clear that the (Narendra) Modi and Yogi (Adityanath) governments are standing with criminals who have kept the Consitution and law bound".

"We have only one demand that Ajay Kumar Mishra Teni is dismissed immediately without any delay and all accused are arrested."

Since the top court has expressed doubt over the police, CBI and the administration, "we want that a commission of two sitting judges be set up under whose supervision an SIT should be formed and the guilty be punished within 30 days," Surjewala said.

Only then the Constitution and the law could be saved, else people will lose faith in them, he claimed.

"Modi ji, you did not follow 'raj dharma' after Atal Bihari Vajpayee told you to do so earlier. But, this is a test for him (Modi) to follow 'raj dharma' now. No accused in the Lakhimpur Kheri killings have been arrested till now," the Congress chief spokesperson said.

He also demanded the constitution of a special bench to hear the pending murder case against Ajay Mishra Teni and decide on it on its next date of hearing on October 20.

A case of murder of one Prabhat Gupta was registered against Ajay Kumar Teni and the verdict of the revision petition filed in the Allahabad High Court is pending for three-and-half years.

Surjewala said while taking up the Lakhimpur violence issue suo motu, the Supreme Court has said that they want a responsible government and asked whether the government sends a notice to every accused person or ordinary person.

"Does this not prove that the Modi and Yogi governments are standing with criminals who tie the Constitution in bonds and those who trample upon and law?" he posed.

The Supreme Court Friday said it is not satisfied with the steps taken by the Uttar Pradesh government in the Lakhimpur Kheri violence case questioned it over not arresting the accused against whom FIR has been lodged.

It asked the state whether the accused in other cases lodged under section 302 (murder) of the Indian Penal Code are treated the same way. "If you see the FIR, section 302 is there. Is it the same way you treat other accused," the bench asked while terming it as a "very serious charge".

The top court has posted the matter for hearing on October 20.