Congress establishes lead in Chhattisgarh and Rajasthan, see-saw on in Madhya Pradesh 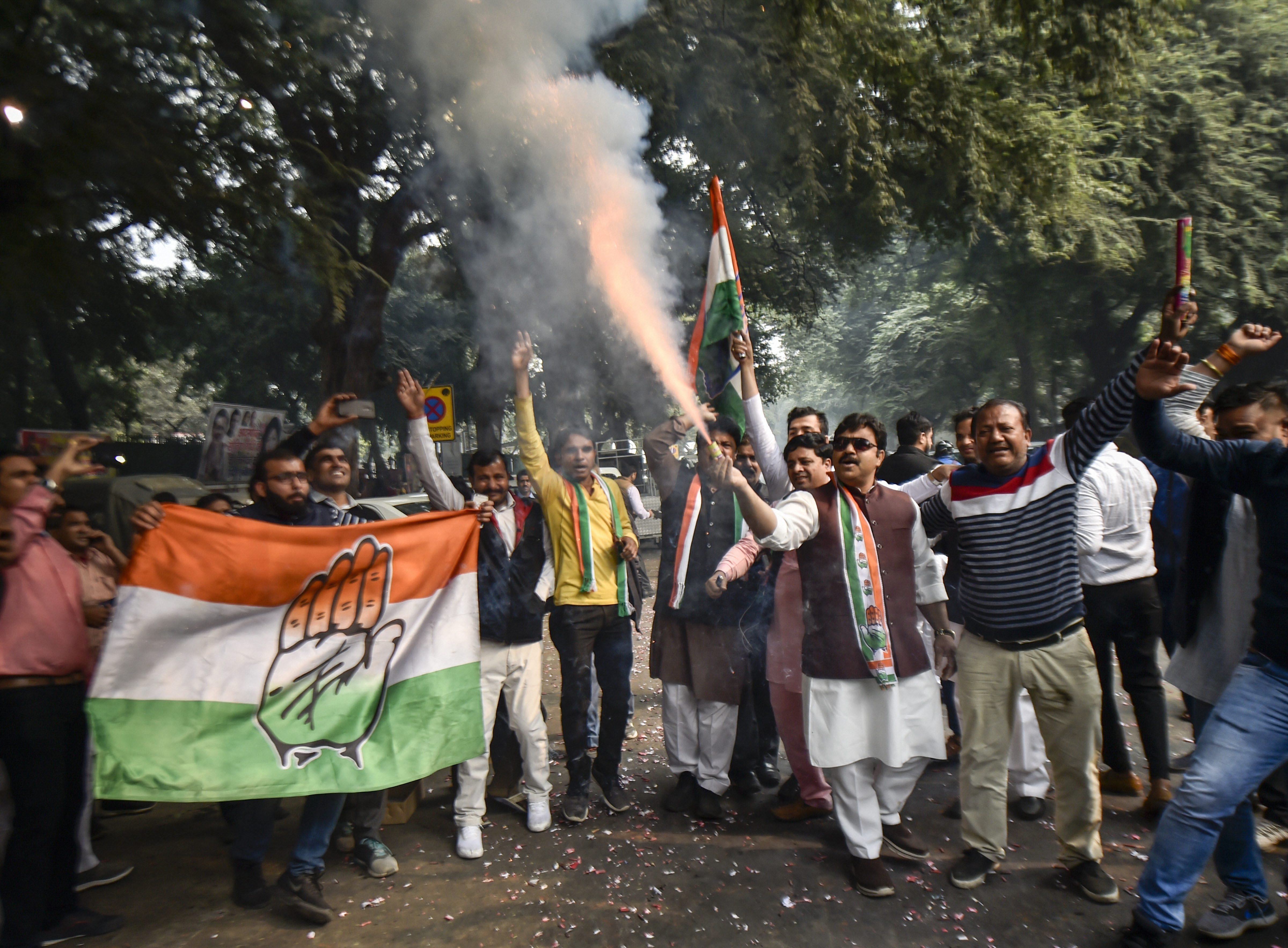 The counting trends in the afternoon show that the Congress is leading in the BJP-ruled states of Rajasthan and Chhattisgarh and is locked in a close fight in Madhya Pradesh. The TRS has forged ahead in Telangana and the MNF in Mizoram.

The Rahul Gandhi-led party became the focal point of attention as the morning progressed and trends showed it could possibly steal a march over rival BJP in Rajasthan and Chhattisgarh. In Madhya Pradesh, the picture has changed every few minutes.

While the elections are widely being seen as the semi-final to the Lok Sabha elections in 2019, in its first reaction to the emerging scenario,  the BJP's Rajnath Singh tried to delink the Centre's performance from the state elections.

'Trends show the Congress marching ahead to victory in Rajasthan, MP and Chhattisgarh. We are confident the trend will continue across the country,' Congress leader Sachin Pilot said in Jaipur. Soon after Ashok Gehlot also spoke to the media, mocking Narendra Modi's promise of bringing 'achhe din (good days)' to India.

In the desert state of Rajasthan, the Congress was leading in 97 seats, three short of the magic number of 100, and the BJP in 75, according to the website of the Rajasthan chief electoral officer. Independents were leading in 12 seats.

Voters in the state, it appeared, stuck to the 'revolving door' trend of choosing the BJP and the Congress alternately.

Though chief minister Vasundhara Raje was ahead of the Congress's Manvendra Singh in Jhalrapatan, about 12 of her ministers, including home minister Gulab Chand Kataria and transport minister Younus Khan, were trailing, according to the state election commission's website.

The two leaders told reporters that a call on which of them will be chief minister will be taken by the MLAs and party president Rahul Gandhi, for whom this is being seen as a make or break electoral exercise.

In Chhattisgarh, the Congress was poised to oust the BJP which was seeking a fourth straight term in office under the leadership of chief minister Raman Singh. According to the Election Commission, the Congress was ahead in 54 of the 90 seats, leaving the BJP trailing with 17 seats.

The Janata Congress Chhattisgarh (J) of former chief minister Ajit Jogi was ahead in four seats.

'The shocker if at all is Chhattisgarh,' BJP leader Shaina NC said.

Jogi said he was happy with the trends and people wanted to oust the Raman Singh government.

Neighbouring Madhya Pradesh was a tantalising see-saw battle between the BJP, seeking a fourth term in power, and the Congress, desperate to stage a comeback in the central Indian state that was once its stronghold.

The BJP was leading in 103 seats and the Congress in 112 in trends available for 224 of the 230 seats. The Bahujan Samaj Party was ahead in four seats, according to Election Commission figures.

'We are going to get a full majority. There is no question about it,' Congress leader Kamal Nath told reporters.

In Telangana, trends indicated a clear landslide verdict for the Telangana Rashtra Samiti with leads in 90 seats. The Congress was way behind with leads in 16 seats, according to the Election Commission. The BJP was ahead in one and the TDP in two.

In the northeast state of Mizoram, the Mizoram National Front was ahead in 20 seats, the Congress in five and the BJP in one. Chief minister Lal Thanhawla was defeated by MNF's T J Lalnuntluanga by 856 votes in Champhai South, Election Commission sources said.

Trinamul leader Mamata Banerjee said people are 'always the man of the match in a democracy' and the semi-final had proved that the BJP was 'nowhere in these states'.