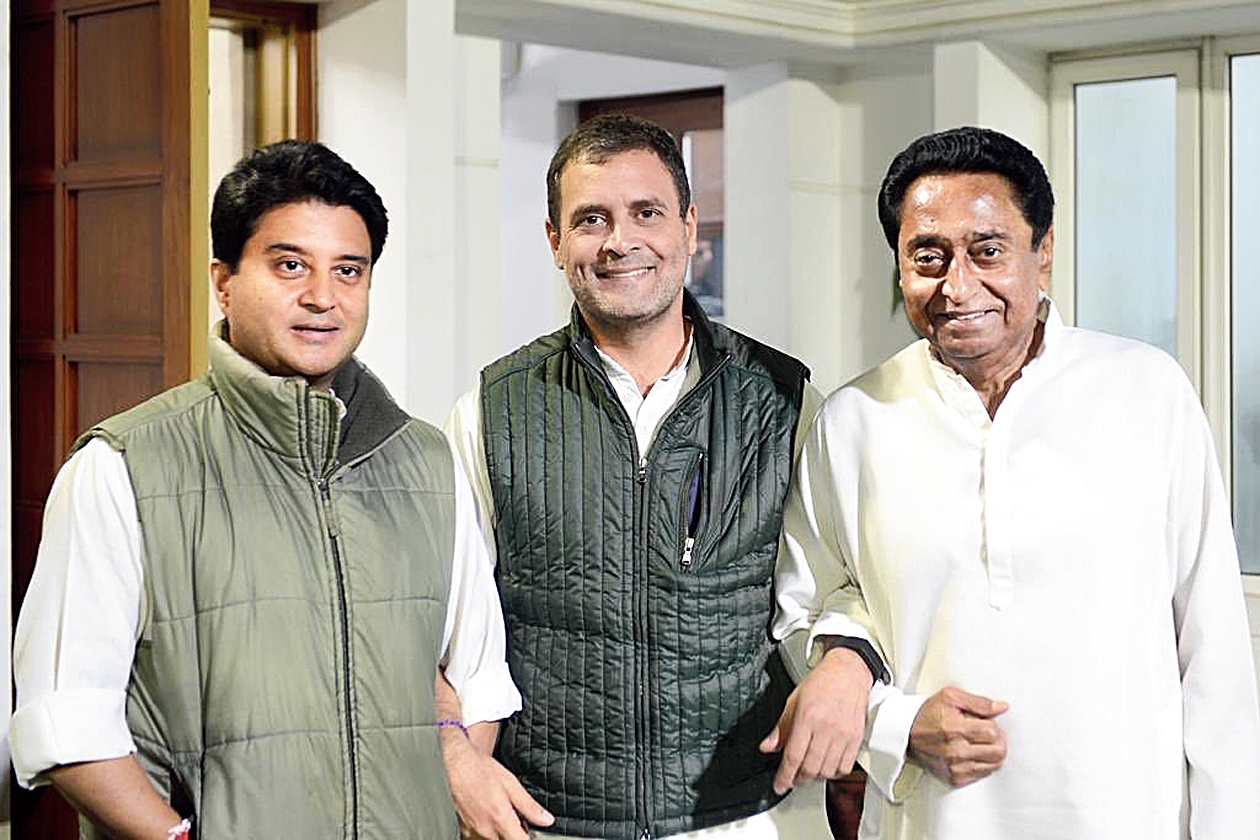 Arms interlinked, Rahul Gandhi poses with Jyotiraditya Scindia (left) and Kamal Nath in a picture tweeted by the Congress president on Thursday evening. Along with the picture, Rahul tweeted a quote of Leo Tolstoy: “The two most powerful warriors are patience and time.”
PTI
Sanjay K. Jha   |   New Delhi   |   Published 13.12.18, 09:59 PM

Old political warhorse Kamal Nath was on Thursday named chief minister of Madhya Pradesh after the other contender, Jyotiraditya Scindia, accepted Congress president Rahul Gandhi’s decision at the end of two rounds of meetings in Delhi.

Rajasthan is expected to follow a similar script on Friday: the young Sachin Pilot appears to have been persuaded to step aside in favour of the veteran Ashok Gehlot.

The Congress legislature party met at night in Bhopal and formally elected Kamal Nath as its leader. Soon after, the party tweeted: “An era of change is upon MP with him at the helm.”

The 72-year-old, who had been a student at St. Xavier’s, Calcutta, is a nine-term Lok Sabha member and became Union minister for the first time in 1991. He was made president of the Madhya Pradesh Congress unit before these Assembly elections while Scindia, 48, was given charge of the campaign. Bringing youth and experience together, the party built a powerful campaign that ousted the BJP from its stronghold.

Hours before the decision was announced, Scindia tweeted a picture of himself and Kamal Nath posing with their arms linked with Rahul with this message: “It is not a race, it is not about kursi, we are here to serve the people of Madhya Pradesh....”

The conciliatory message from Scindia, who had earlier dug in his heels, came after Rahul tweeted the same picture with this quote from Leo Tolstoy: “The two most powerful warriors are patience and time.” The Congress president’s subtle message was the most tangible indication from the high command of what would unfold.

In Rajasthan, too, the experienced Gehlot, 67, who has served as chief minister for two terms, is expected to take over. Pilot, 41, who desperately wanted to head the government, has been persuaded to wait for his turn, sources said.

Pilot had tweeted in the evening after a meeting with Rahul: “I appeal to party workers to maintain peace and decorum. I have full faith in the leadership; we will welcome whatever Rahul Gandhi and Sonia Gandhi decide. It is our responsibility to uphold the honour of the party. We are dedicated to the party.”

The tweet came amid reports that his supporters had blocked a highway demanding that he be made chief minister.

As one after another meeting was held through the day, Sonia and Priyanka also arrived at Rahul’s residence, triggering speculation about differences in the family over the choice of chief ministers. Sources said Sonia was clear that inexperienced leaders should not be given the reins just ahead of the parliamentary elections, but Rahul and Priyanka were keen to appoint at least one of the two — Scindia or Pilot — to continue with the youth narrative.

Although this round has gone to the veterans, the party leadership acknowledged the contribution of the younger leaders who had played a critical role in electioneering and rebuilding the Congress organisation. Scindia and Pilot were promised a bigger role in the future but made their displeasure clear before Rahul.

There is no denying that people in Madhya Pradesh share a much deeper emotional connect with the charismatic Scindia than with Kamal Nath, but the Congress high command wanted a more mature leader since the parliamentary election is barely four months away. 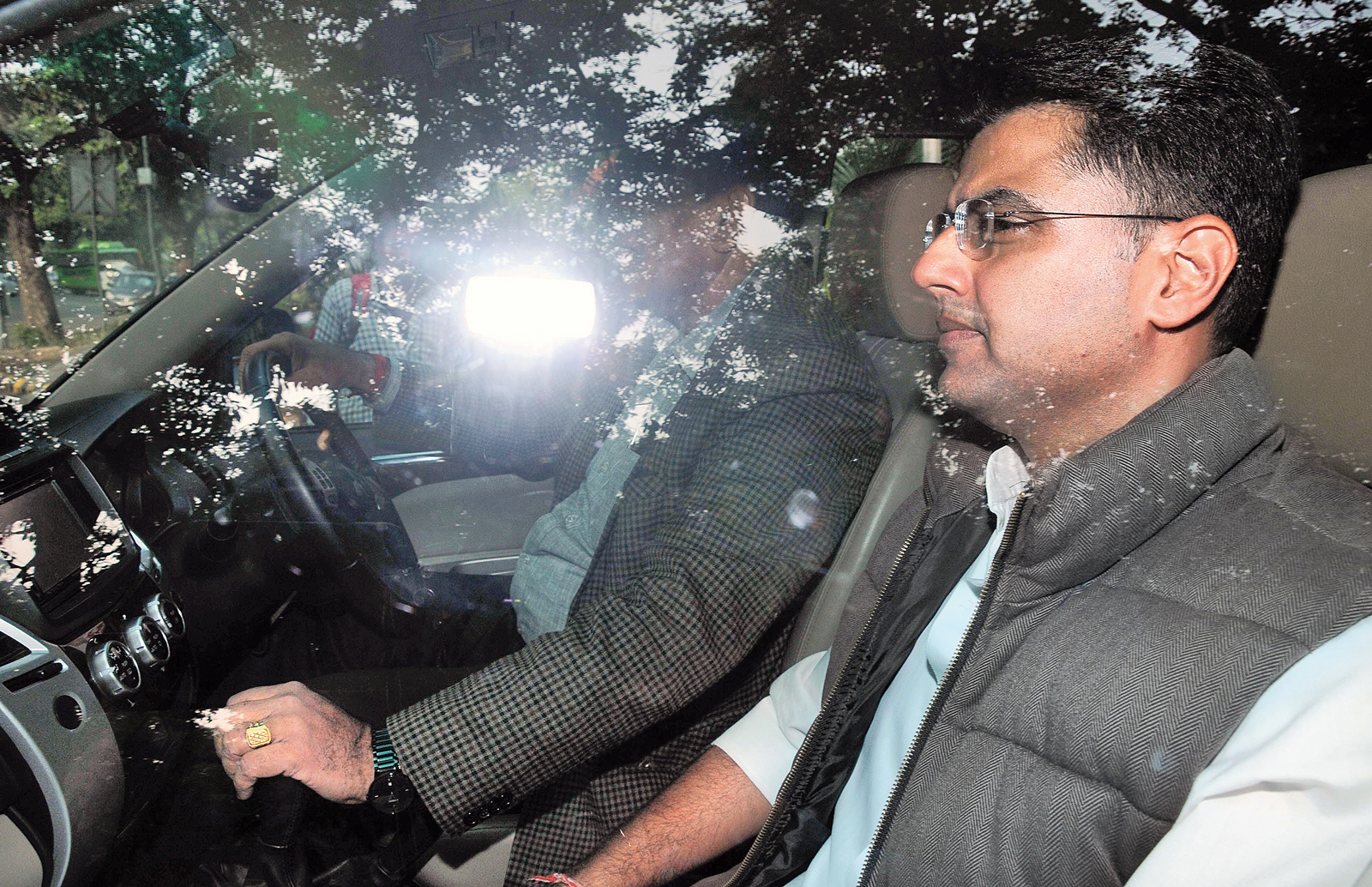 Sachin Pilot leaves after meeting Rahul in New Delhi on Thursday evening. Pilot tweeted after meeting Rahul: “I appeal to party workers to maintain peace and decorum. I have full faith in the leadership; we will welcome whatever Rahul Gandhi and Sonia Gandhi decide.”
Prem Singh

That former chief minister Digvijaya Singh lent his political weight behind Kamal Nath since the start tilted the scales in his favour. Rahul did not want to run the risk of unforeseen troubles ahead of parliamentary election. Digvijaya had also played a crucial role in party’s election management despite not being in the race for the top post.

Although concerns about a mature handling of delicate situations that thin-majority governments present and political management for the Lok Sabha elections are difficult to ignore, many in the party believe that raising a new leadership is a political imperative to build a powerful campaign against Narendra Modi in 2019. A galaxy of younger leaders with Rahul would symbolise the much-awaited Congress transformation, they argue.

“A new dawn, that’s what we are looking at,” a young party leader said. “How can we impress the voters by presenting the faces that have been around for 30-40 years?” this leader added.

In Chhattisgarh, there are four contenders — Bhupesh Baghel, Tamardhwaj Sahu, T.S. Singhdeo and Charan Das Mahant. Sources said the choice might have narrowed down to Singhdeo and Mahant but there was no final announcement. Singhdeo, who was the leader of Opposition in the previous Assembly, appears to be the frontrunner.

As the relay meetings to pick the three chief ministers went on, the Congress continued to present a picture of business as usual. Divya Spandana, who handles the party’s social media account, posted this tweet: “While you wait on tenterhooks to know the new Chief Ministers of Rajasthan, Madhya Pradesh & Chhattisgarh, distract yourself with this fun new game we found.” The game: Catch Modi Corruption.

While Spandana encouraged people to play the Congress version of the memory game, her party chief took time off to visit Khan Market.

Over to Rahul Gandhi for chief minister selection in 3 states