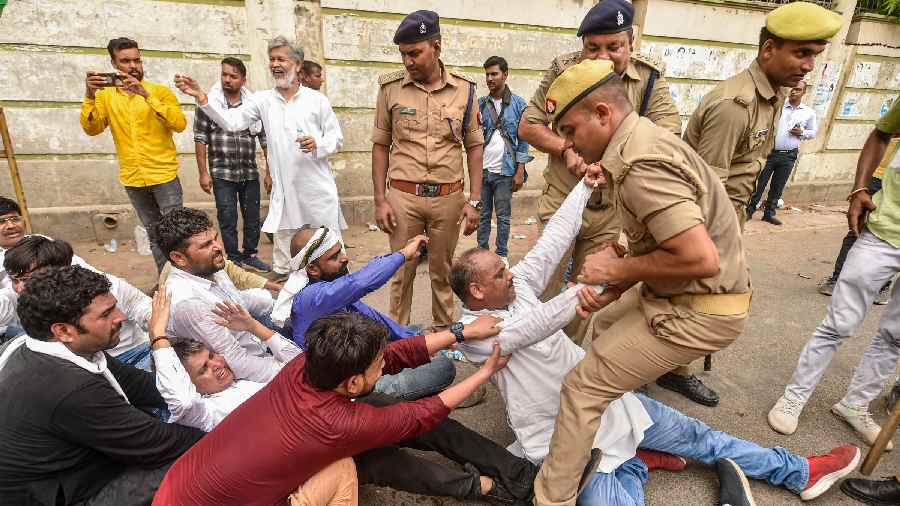 Congress MPs Thursday met the LoK Sabha Speaker and the Rajya Sabha Chairman to raise the issue of Delhi Police action against party lawmakers including some women during their protests in the national capital, and alleged they were treated like "terrorists".

They alleged that their privileges as members of parliament have been breached and demanded lawful action against the Delhi Police.

Congress leaders and MPs have been staging demonstrations against their former president Rahul Gandhi's questioning by the Enforcement Directorate in a money-laundering case pertaining to the National Herald newspaper, which they have alleged is "false".

They also handed over a pen drive containing videos of the alleged harassment of MPs and how they were "ill-treated" by Delhi Police personnel.

Chowdhury also trashed as "plants by the ED and the BJP government" reports that Gandhi allegedly put the blame on former Congress treasurer Motilal Vora for wrongdoings in the National Herald case.

"These are only plants. It is done for their convenience to divide and break the Congress. We do not know, he is our leader, but they know."

The Lok Sabha MP said the ED and the government should not pursue politics of vendetta and violence. "Have you ever seen any political leader being questioned for so many days? But what crime have we done? We only wanted to stand in solidarity with our leader."

"The manner in which the police have treated us, looks as if we are all terrorists," Chowdhury told reporters after the meeting. He alleged even women MPs were beaten up and their clothes "torn".

"Is this an 'Amrit Kaal'? The Modi and Amit Shah government are turning this Amrit kaal into a Poison Kaal? Have there never been agitations and we are only peacefully trying to put across our side peacefully in a Gandhian way," he said.

His reference was apparently to the Prime Minister Narendra Modi's speech during the 75th Independence Day celebrations in 2021 when he had said India was entering the Amrit Kaal' of 25 years.

Kharge said they have told the Chairman the Congress MPs were misbehaved with were taken to police stations without informing the Chairman or the Speaker as is mandated by rules.

"But their intent was to harass and mentally torture the MPs and our privilege has been violated. We wanted the chairman to take note of this and take action.

"We want this be treated as a privilege notice and it is the right of the Chairman to defend us for violation of our rights and ask them how MPs were detained. The Chairman said he will examine this and get details of the incidents," he told reporters.

Senior leader P Chidambaram said the ED cannot leak its version of the interrogation. "The fact that ED has leaked selected parts of the investigation according to their understanding clearly establishes bias and prejudice."

He also said the police have assaulted MPs of both house and have taken them away MPs in police stations bordering Haryana and held them without a written order for eight to 10 hours and have denied them food and water. "They have not arrested us and no information has been given to Parliament."

Let the matter be referred to the privileges committee, Chidambaram demanded.

The party's memorandum to the RS Chairman also said, "This is a clear case of violation of the privileges of MPs and we urge you to take notice of these incidents and deal with the matter appropriately."

Chowdhury narrated how some party MPs, including Karur Lok Sabha MP Jothimani, were allegedly dragged by the Delhi Police and that her clothes "were torn".

"We met the Speaker and raised the issue of the manner in which our MPs and leaders were treated by the Delhi police and sought action against the accused police officers," Chowdhury told reporters after the meeting.

He said the MPs only stood in solidarity with their leader and wanted to accompany him till the ED office peacefully, but were instead "beaten up" and prevented by the cops.

Chowdhury was accompanied by chief whip of the party K Suresh, the party's whip in Lok Sabha Manickam Tagore and other MPs including Gurjit Aujla.

The RS delegation was led by Leader of Opposition Mallikarjun Kharge and had senior Congress leaders such as P Chidambaram, Jairam Ramesh and KC Venugopal.

The party has also accused the Delhi Police of criminal trespass by entering the AICC office and beating up its leaders, a charge denied by the force.

The party has lodged a written complaint for registration of an FIR against the erring staff and demanded their suspension. The Congress is Thursday staging a gherao of all Raj Bhawans across the country against the police action and "brutalities" against Congress workers and leaders.