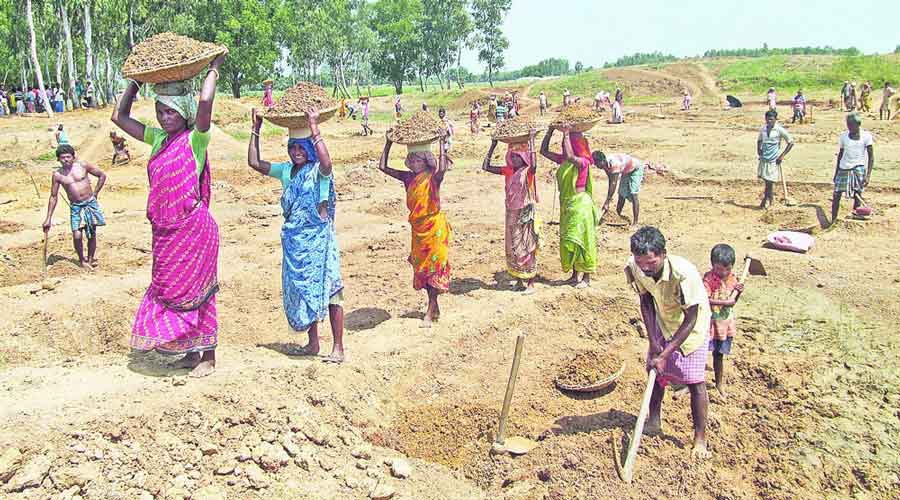 Most of the states already face huge arrears in payment to the job scheme workers because of erratic funds release from the Centre.
File photo
Basant Kumar Mohanty   |   New Delhi   |   Published 26.03.22, 03:12 AM

The Centre has linked approval for the states’ rural job scheme budgets to their performance on certain transparency measures, hanging a cloud over funds release under the programme from April 1.

The Union rural development ministry on Tuesday wrote to all the states seeking information by Wednesday on the social audits done and ombudsmen appointed by them under the Mahatma Gandhi National Rural Employment Guarantee Act.

The social audits, conducted at the gram panchayat level, take note of issues such as job card holders’ grievances and whether projects have been completed correctly. State governments are required to appoint ombudsmen in each district to receive workers’ complaints, inquire and pass orders.

However, both measures have been implemented poorly in most states, with the Covid outbreak further affecting the processes, a rural development ministry official said.

The official said most states had not replied to the ministry by the Wednesday deadline but added that what action would be taken against them had not been decided.

Social activists Nikhil Dey and Aruna Roy expressed fear that the Centre might now delay approval for the states’ labour budgets relating to the scheme for the upcoming financial year, causing a further hold-up in funds release to these states.

Most of the states already face huge arrears in payment to the job scheme workers because of erratic funds release from the Centre.

Besides, if the state budgets for the NREGA are not approved, the states might not feel confident about letting the gram panchayats start projects under the scheme, they said.

“The social audits and the appointment of ombudsmen are good steps for better and transparent implementation of the scheme. The government should ensure the states follow these measures,” Dey said.

“But linking these measures to approval of the labour budget means there will be a delay in funds release and the people will suffer.”

According to official data on the scheme website, the programme had a negative balance of Rs 15,190 crore on March 23 this year, a result of the rural development ministry exhausting its allocated funds. Every year some liability is carried forward to the next financial year, when funds are released from the budget for the new fiscal.

The Union ministry’s letter to the states said: “This information is required to apprise the Empowered Committee for consideration of Annual Action Plan and Labour Budget for 2022-23 under MGNREGA.”

In January, too, the Union ministry had written to the states seeking information on social audits and the appointment of ombudsmen. Many states had failed to provide the details.

The scheme provides for up to 100 days’ paid, unskilled work for every rural family in a year. Nearly seven crore families seek work under the programme every year.

Before the start of a financial year, each state government prepares a labour budget relating to the job scheme, with feedback from the gram panchayats, outlining how many projects would be done and how many jobs created that fiscal. The Centre needs to approve this budget.