'10,000 posts will be filled in the State Police Department and the rest of them will be in different other departments, boards and corporations' 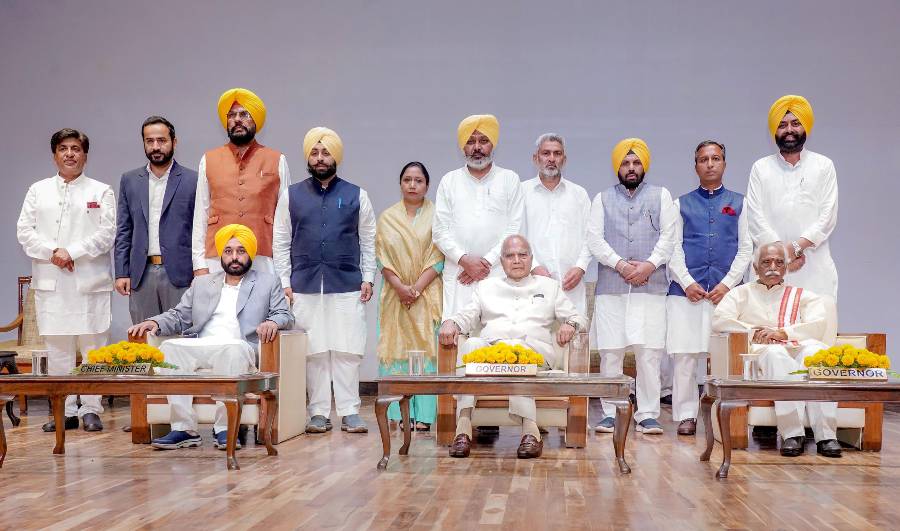 In its first decision, the Punjab Cabinet led by Chief Minister Bhagwant Mann on Saturday approved filling up 25,000 vacant posts in various state departments, including 10,000 in the police force.

Mann announced the decision in a video message after he chaired the first meeting of his Cabinet.

The process of advertisement and notification for these jobs would be initiated within a month, he said.

"In the coming days, we will also fulfil our rest of the guarantees (poll promises)," he added.

The chief minister said 10,000 jobs will be given in the Punjab Police and the rest in various other departments, boards and corporations.

He said the jobs will be given on merit.

There will be no discrimination, no "sifarish" (recommendation) and no bribe, he added.

This "historic" decision would open new vistas of employment for the youth by providing jobs to them in the government sector through a transparent and merit-based mechanism, said Mann.

Unemployment has been one of the major issues that his Aam Aadmi Party had raised during the just-concluded state assembly polls.

The party had promised to take the first cabinet decision of offering jobs after it came to power.

Earlier on Saturday, 10 AAP MLAs, including a woman member, were inducted into the Bhagwant Mann-led Punjab's Cabinet.

Governor Banwarilal Purohit administered the oath of office and secrecy to the 10 ministers at a simple ceremony at Guru Nanak Dev auditorium in Punjab Raj Bhawan here.

The Cabinet also cleared the presentation of supplementary demands for grants for the year 2021-22 to be presented in the ensuing assembly session.

This decision would provide a budget for additional or excess expenditure incurred by various departments during the financial year 2021-22 to liquidate the pending liabilities, according to an official release.

Further, in accordance with the provisions contained in Clause (3) of Article 203 of the Constitution of India, the Cabinet also gave approval to present the Supplementary Demands for Grants of the Government of Punjab for the year 2021-22.

Similarly, the Cabinet also gave approval for presentation of the Statement of Estimated Expenditure (Vote on Account) from April 1, 2022 to June 30, 2022 of the State of Punjab for the year 2022-23 mandated to be presented in the State Assembly in the ensuing Punjab Vidhan Sabha as per the provisions under Rule 164 of the Rules of Procedure and Conduct of Business in the Punjab Legislative Assembly, it said.