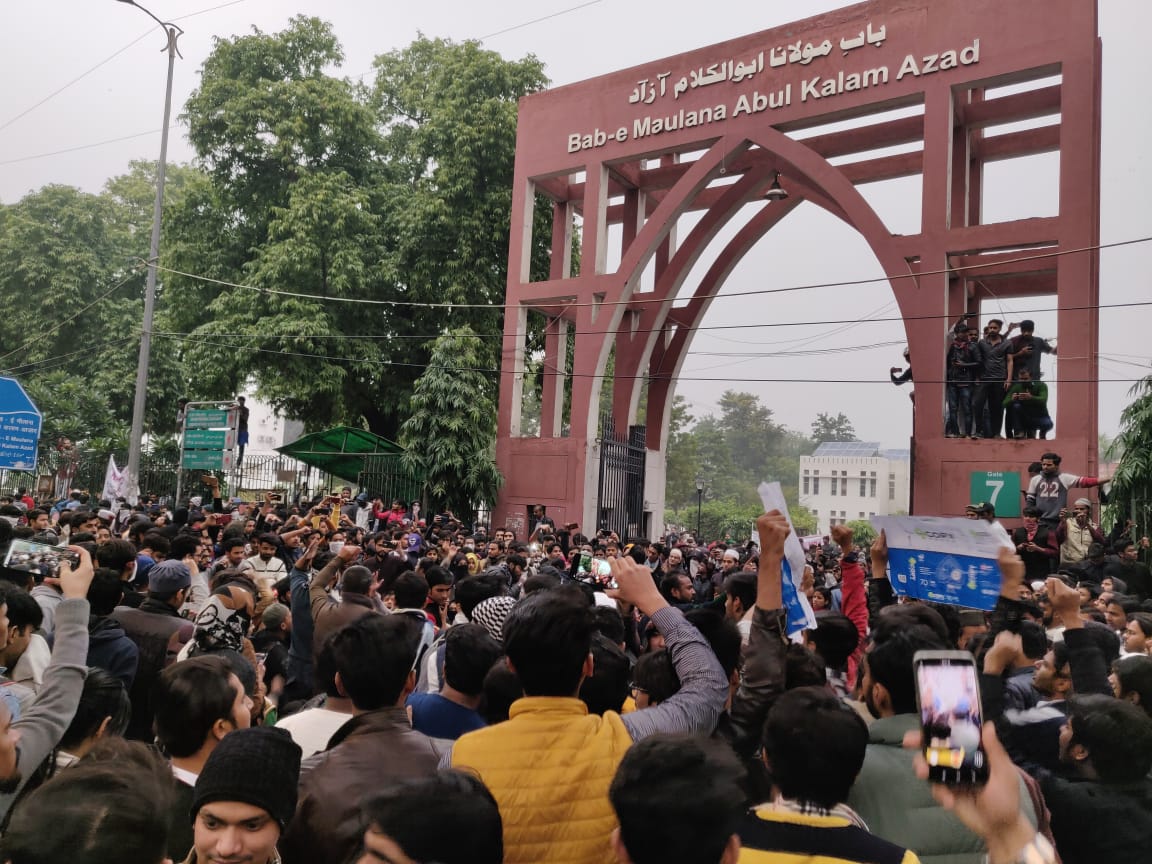 Jamia Millia Islamia University students, shouting slogans in protest against the amended Citizenship Act, clashed with police while they were marching towards Parliament on Friday

The students, who were chanting slogans like 'Take back CAB' and 'Delhi police wapas jao', said 48 of them sustained injuries in the clash. The injured were taken to Holy Family hospital where the media has been barred from entering.

As many as 70 students were detained after the clash, the students claimed. However, the police have put the number of detainees at 40.

The clash broke out when the police stopped the march at the gates of the university.

The police used tear gas and conducted baton-charge to quell the agitation. In retaliation, the protesters hurled stones at them.

A tear gas shell is seen on the ground between a torn placard and a lost shoe, during a protest by Jamia Millia Islamia University students against the Citizenship Act , in New Delhi, Friday, December 13, 2109.
Picture by Furquan Ameen

'We were marching peacefully. But the police stopped us from marching. First, they lathicharged us asking us to move backwards. Then they pelted stones in response to which students picked up stones too,' Onaihza, a law student at Jamia, said.

The police had cordoned off the road after which many of the protesters tried to climb onto the barricades. The university gate, which had to be closed, was later opened.

'Students started their march. We had placed barricades which they broke and tried to jump over them. Then they threw stones at us forcing us to use teargas shells. The students have been detained and taken to Badarpur police station,' a senior police official said.

Area MLA Amanatullah Khan from the Aam Aadmi Party (AAP) rushed to the spot to take stock of the situation.

Earlier, as precautionary measures, the Delhi Metro Rail Corporation (DMRC) closed the entry and exit points at Patel Chowk and Janpath metro stations on the advice of the Delhi police.

The gates were later opened.

'As advised by Delhi Police, entry & exit at Patel Chowk and Janpath have been closed. Trains will not be halting at these stations,' DMRC said on Twitter.

As advised by Delhi Police, entry & exit at Patel Chowk and Janpath have been closed. Trains will not be halting at these stations.

The Citizenship (Amendment) Bill was passed in Lok Sabha on Monday and cleared in Rajya Sabha on Wednesday. President Ram Nath Kovind gave his assent to the bill on Thursday night.

The controversial bill has been opposed by various politicians as well as civil rights activists.