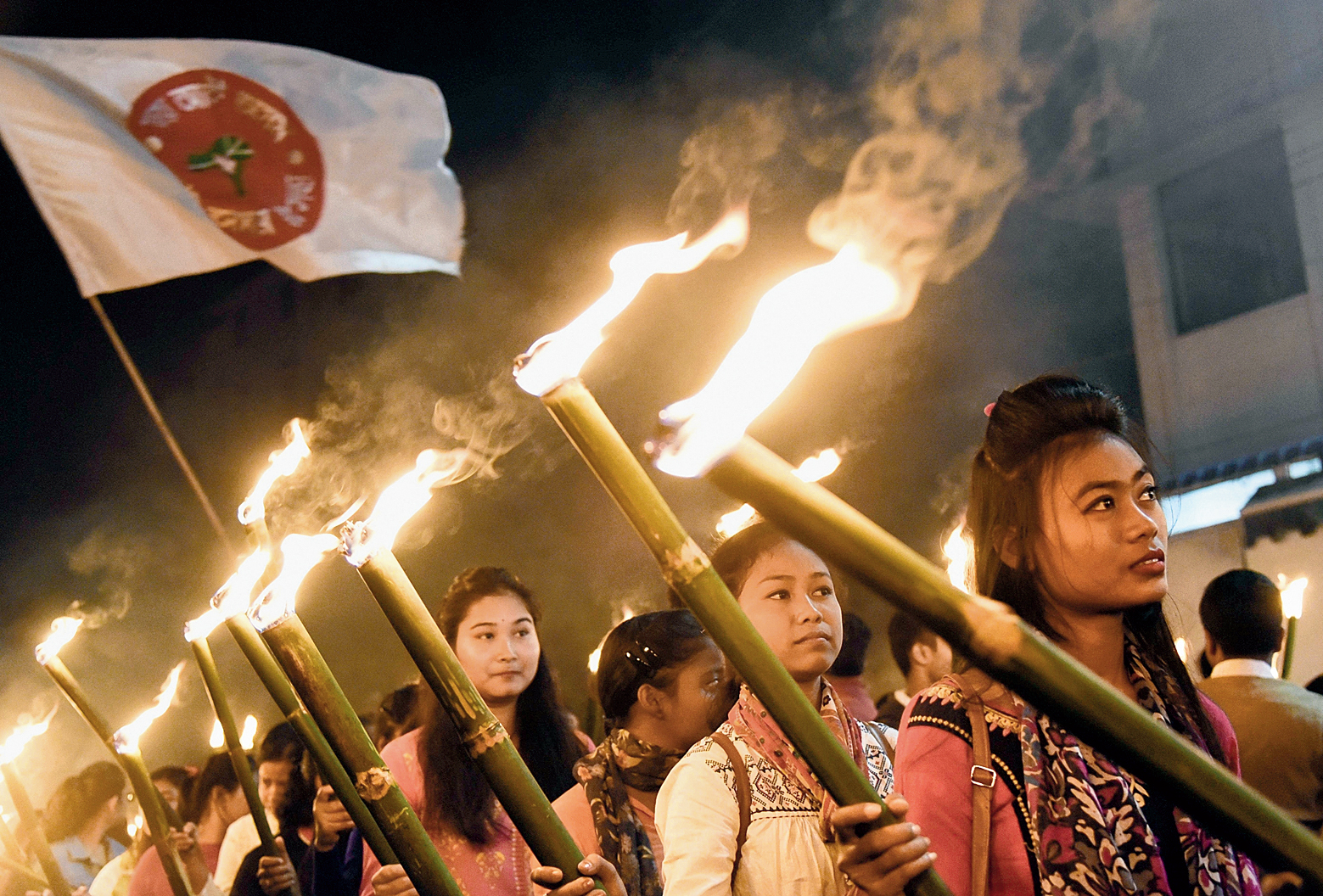 Activists take out a torchlight rally against the citizenship bill in Guwahati on Sunday.
Picture by UB Photos
Pranjal Baruah   |   Guwahati   |   Published 08.12.19, 09:46 PM

As Union home minister Amit Shah prepared to table the Citizenship (Amendment) Bill in the Lok Sabha on Monday, the government side appeared to be worried not about Opposition warhorses but students in the Northeast.

The bill, which aims to grant citizenship to persecuted non-Muslim refugees from Bangladesh, Pakistan and Afghanistan, is the first such measure that can introduce religion into citizenship laws in India. Several Opposition parties have vowed to oppose the bill in Parliament but fear that the government has already managed the numbers.

Against such a backdrop, Assam chief minister and BJP leader Sarbananda Sonowal on Sunday appealed to students to stay away from growing protests in the Northeast.

The Northeast protests are being spearheaded largely by students who have objected to foreigners, regardless of their religion, being granted citizenship rights. A clause in the bill exempting some regions of the Northeast has so far failed to sway the protesters.

On Sunday, Sonowal said: “The young generation of the state must endeavour to put Assam strongly on the world stage with hard work, dedication, honesty and sincerity and they must not while away the most productive time of their lives in movements and agitations. Building a robust work culture in the state should be the prime objective of everyone and youths must not be misled to join agitations based on concocted and baseless grounds.”

It was an unusual statement from a public figure in a state where milestone movements have largely been sustained by students over the decades.

The Assam chief minister sought to assure the people that the government would not do not anything to undermine the identity of the Assamese race.

The emotive nature of the issue involved is also becoming apparent.

On Sunday, hundreds of protesters ransacked the district head office of the Asom Gana Parishad (AGP) in Dibrugarh in Upper Assam. A BJP ally, the AGP, led by the student leaders of the Assam Agitation of the 1980s, is supporting the bill.

Concern spread beyond the borders too with the UK advising its nationals to take precautionary measures while visiting the Northeast, especially Assam.

On Sunday, the Foreign and Commonwealth Office (FCO) of the UK said: “From January 2019, protests have continued in Assam and other states in the North East of India. These protests are related to the revision of the National Register of Citizens (NRC) and a proposed CAB.”

The US government has already prohibited its employees from travelling to several states of the region.

The state police have issued an alert across the state. Assam director-general of police Bhaskar Jyoti Mahanta said, “An alert has been sounded in the state. District superintendents of police have been asked to keep a sharp watch over any suspicious activity. Additional forces have been deployed in vulnerable locations.”

Sources said the security of several AGP and BJP leaders has been stepped up too after the attack on and ransacking of the AGP office in Dibrugarh.

The following is a statement on the proposed Citizenship Amendment Bill. The statement has been endorsed by over 770 scientists and scholars from several institutions, including some of the most renowned in the country.

We are a group of Indian scientists and scholars.

We are issuing this statement in our personal capacity as concerned citizens to express our dismay at the reported plans to table the Citizenship Amendment Bill 2019 in the parliament. We do not have access to the exact text of the current version of the Bill.

Our statement is based on media reports and the text of the previous version of the Bill that was passed by the Lok Sabha in January 2019. Nevertheless, we feel compelled to issue this statement already at this point of time in view of the reports that the Bill may be tabled in parliament early next week and may be taken up for voting in both houses soon after.

We understand that the Bill seeks to grant citizenship to Hindus, Sikhs, Buddhists, Jains, Parsis and Christians from Afghanistan, Bangladesh and Pakistan. The stated intent of the Bill is to provide refuge to persecuted minorities from neighbouring countries.

While we support this laudable objective, we find it deeply troubling that the Bill uses religion as a legal criterion for determining Indian citizenship.

The idea of India that emerged from the independence movement, and as enshrined in our constitution, is that of a country that aspires to treat people of all faiths equally. The use of religion as a criterion for citizenship in the proposed bill would mark a radical break with this history and would be inconsistent with the basic structure of the constitution.

We fear, in particular, that the careful exclusion of Muslims from the ambit of the Bill will greatly strain the pluralistic fabric of the country.

We note that article 14 of the Indian constitution prohibits the State from denying “to any person equality before the law or the equal protection of the laws within the territory of India”. While it is the job of legal experts to determine whether this draft bill violates the letter of the constitution, it seems certain to us that it violates its spirit.

For the reasons mentioned above, we call for the immediate withdrawal of this bill and, as its replacement, request for appropriate legislation that will address the concerns of refugees and minorities in a non-discriminatory manner.