Ban on the platforms is an 'interim' one, owners of the 59 companies will now get an opportunity to clarify 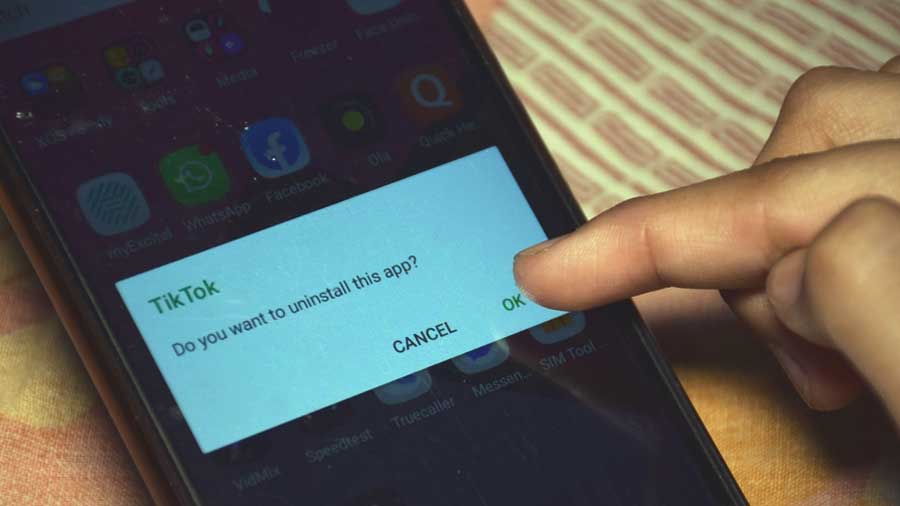 The probe will drag on and the Chinese entities will have the opportunity to contest any decision in the courts of law.
Shutterstock
R. Suryamurthy And Our Bureau   |   New Delhi   |   Published 01.07.20, 03:31 AM

The ban on the 59 Chinese digital apps, including TikTok and WeChat, is an “interim” one — a detail the Narendra Modi government glossed over when it peremptorily issued its order on Monday night.

“Government Bans 59 mobile apps which are prejudicial to sovereignty and integrity of India, defence of India, security of state and public order,” the title of media release on Monday had said.

The directive issued by the information technology ministry had relied on its powers under Section 69A of the Information Technology Act and “relevant provisions of the IT Rules 2009” to issue the ban.

The owners of the 59 companies will now get an opportunity to make submissions before a specially formed committee to argue their case to continue operations in India.

Under Rule 9 of the IT Rules, the government can exercise emergency powers to ban public access to “any information… through any computer resource” as an interim measure without giving the entity an opportunity of a hearing.

But the government is obliged to form a committee that will hear submissions from the entities affected by the decision.

“The due process of the law requires an analysis of what the matter is on record. This is an ‘interim order’ (of banning apps). There is a process defined in the information technology law, with regard to the blocking of apps. A government committee will look into it and pass a more detailed order,” an official of the ministry of electronics and information technology said.

There was no explanation why this wasn’t disclosed when issuing the order on Monday.

The schedule for the hearings hasn’t been fixed and this could turn out to be a long-drawn process. The probe will drag on and the Chinese entities will have the opportunity to contest any decision in the courts of law.

But in a digital world where fads are transient and recall fades with the absence from Google and Apple play stores, it may be hard to recover ground — especially when local apps have already jumped into the vacant spaces and have started to grab users.

China on Tuesday billed India’s decision to ban the apps as “discriminatory” and a possible violation of WTO rules.

This is the second time in a little over two months that China has accused India of discriminatory trade practise in violation of WTO rules. The earlier instance was when New Delhi decided to impose additional restrictions on foreign investments from neighbouring countries in a move that was widely perceived to be targeting Beijing.

While Monday night’s order banning the apps, including the popular TikTok, did not name any country of origin, information and broadcasting minister Prakash Javadekar made it clear on Tuesday that the ban was directed at China.

In a tweet, he said: “The whole country has appreciated the decision of the @narendramodi govt to ban 59 Chinese Apps. This will give Fillip to Indian Startups & they will come up with better versions very soon. This is a right step towards #AtmaNirbharBharat.’’

China spoke out against the ban in Beijing and in Delhi. While responding to questions in Beijing, Chinese foreign ministry spokesman Zhao Lijian said: “The Indian government has the responsibility to protect the legitimate rights and interests of international investors in India, including Chinese businesses, in accordance with market principles. Practical cooperation between China and India is mutually beneficial. Deliberate interference in such cooperation will not serve the interests of the Indian side.”

This was followed up later in the evening with a detailed statement from the Chinese embassy in Delhi.

Opposing the move, the embassy statement described the reasons cited by the Union electronics and IT ministry for banning the apps — “they engaged in activities which are prejudicial to sovereignty and integrity of India, defence of India, security of state and public order” — as “so called grounds”.

Further, according to China, “India’s measure, selectively and discriminatorily aims at certain Chinese apps on ambiguous and far-fetched grounds, runs against fair and transparent procedure requirements, abuses national security exceptions, and suspects of violating the WTO rules. It also goes against the general trend of international trade and E-commerce, and is not conducive to consumer interests and market competition in India.’’