Supporters of protests summoned by NIA on Sunday 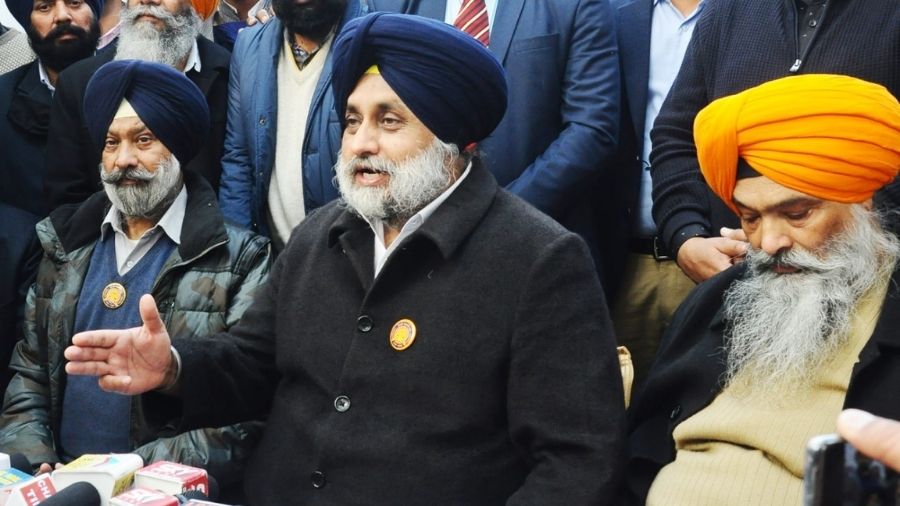 Sukhbir Singh Badal (middle) said on Saturday that the Centre is being insincere in talks over the farm laws.
Twitter/ @officeofssbadal
Our Bureau, Agencies   |   Chandigarh   |   Published 17.01.21, 12:59 PM

He also alleged that the Centre was being insincere in talks over the farm laws and said the government is only “trying to tire out farmers”.

“Simultaneously, it (Centre) is intimidating farmers by issuing notices to them through various agencies like the National Investigation Agency (NIA). Farmers are not anti-nationals. We condemn this,” Badal said.

In a tweet, he said, “Strongly condemn Centre's attempts to intimidate farmer leaders & supporters of #KisanAndolan by calling them for questioning by #NIA & ED. They aren't anti-nationals. And after failure of talks for the 9th time, it's absolutely clear that GOI is only trying to tire out farmers.”

Punjabi actor Deep Sidhu and farmers’ leader Baldev Singh Sirsa are among the 40 people that the NIA has summoned for quizzing in a case linked to the banned outfit Sikhs For Justice.

Sidhu has been asked to appear before the agency’s headquarters in Delhi on Sunday, NDTV reported.

He said the SAD had always stood with farmers and quit the National Democratic Alliance when the government refused to listen to them.

Badal also slammed Punjab Chief Minister Amarinder Singh, alleging that he has failed to fulfil any of his promises made to people.

Badal asked the chief minister to tell one thing he had done for the people of the state in the past four years of his rule.

In direct contrast, former chief minister Parkash Singh Badal was responsible for making Punjab power surplus besides bringing in irrigation projects, providing free power for tube wells, creating the ‘mandi’ infrastructure and even ushering in the minimum support price system by taking up the issue with the Centre, he said.

All this can be verified, he said, adding that his party's government in the state ensured peace and communal harmony.