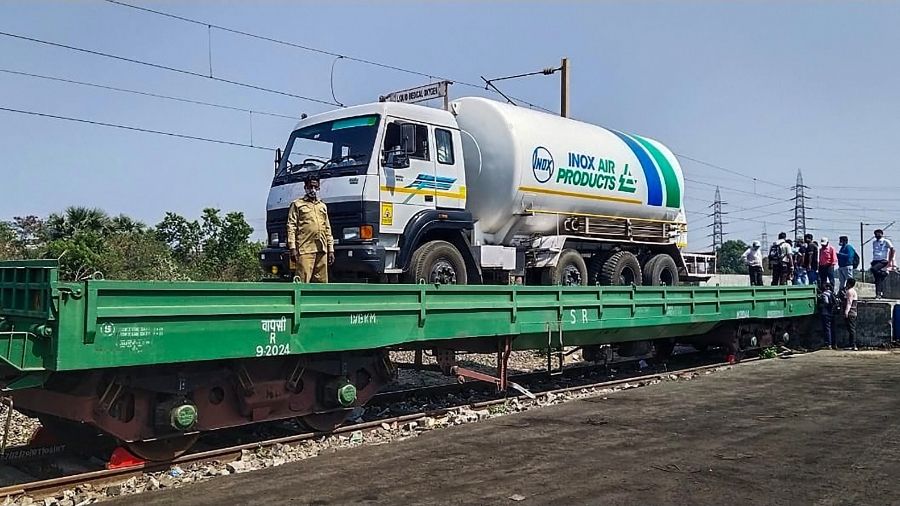 The Centre has rapped the Arvind Kejriwal-led Delhi government for its alleged failure to arrange tankers for transportation of oxygen for the city's hospitals and said proactive actions by it could have "avoided tragic incidents".

In a hard-hitting letter to Delhi Chief Secretary Vijay Dev, Union Home Secretary Ajay Bhalla also claimed that the Delhi government's efforts to resolve logistical issues for procuring oxygen have "not been up to the mark" at a time when other states and union territories have been making earnest and professional efforts on the matter.

Bhalla wrote the letter on April 25. However, on Tuesday, Chief Minister Arvind Kejriwal said his government will import 18 cryogenic tankers from Thailand and 21 ready-to-use oxygen plants from France.

Kejriwal said the scrambling for oxygen witnessed last week amid a surge in Covid-19 cases has been addressed and the situation has improved significantly in the past two days.

In the next month, the Delhi government will set up 44 oxygen plants at various hospitals, including 21 that will be imported from France. The Centre will install eight oxygen plants by April 30, Kejriwal said during an online briefing.

The chief minister said the Centre has provided five oxygen tankers to Delhi.

Highlighting various steps taken by the central government like stopping oxygen supply to industries, uninterrupted movement of oxygen tankers, airlifting of tankers from abroad, the union home secretary said all state governments and UTs have been making diligent and continuous efforts at their level for the last few days to arrange tankers for the allocated quantity of medical oxygen and a specially designated virtual group was formed by the Ministry of Road Transport and Highways (MoRTH) for facilitation.

"However, Delhi government has hardly been able to arrange any tankers so far though many crucial days have passed since the government of India made allotment of oxygen," Bhalla's letter said, urging the Delhi chief secretary to urgently take immediate action in this regard as is being done by chief secretaries and other officials of other states and UTs.

The home secretary said presently, there is no shortage of medical oxygen supply and Delhi had been allocated 480 MT on April 21 after consultation with officers of the Delhi government.

"However, it has been brought to my notice that Delhi has received less supply than its actual allocation made by the government of India largely due to logistical issues which are not at all addressed by the state government," he said.

Furthermore, alternative arrangements for the remaining 28 hospitals were not properly tied up by the Delhi government, he claimed.

"As a result, some of these hospitals have been complaining about severe shortage of medical oxygen and one hospital mentioned that some persons died because of it.

"This could have been avoided had proper, effective, and meaningful consultations with various stakeholders, specially the suppliers and recipient hospitals, had been done well in time by Delhi government," Bhalla said.

Highlighting that most of the hospitals in Delhi were converted into Covid-19 facilities in view of the sudden and alarming rise in cases, the home secretary said such hospitals by very nature of their earlier functioning, did not have adequate storing capacity to store the oxygen supplied as per their present requirements since in their earlier functioning most of them did not need more quantity of oxygen.

For the same reasons, he said, their oxygen dispensing infrastructure also may not have been up to the requirement, especially for augmented oxygen supply required for Covid-19 patients.

Bhalla said a virtual meeting with all hospitals in Delhi, taking stock of their respective capacities and infrastructure, guiding them to suitably augment their storage and pressure facilities to the required level with the help of experts of the field "would have avoided tragic incidents".

"Such things are to be immediately taken up proactively and on a war footing with the state government taking the initiative.

"In these difficult times, it is extremely important that the central government and the governments of various states and UTs work in tandem to tackle this Covid crisis and minimise human suffering. Therefore, I will request you to take urgent, effective, innovative and result-oriented measures like Chief Secretaries of other states and UTs have taken," the home secretary said.