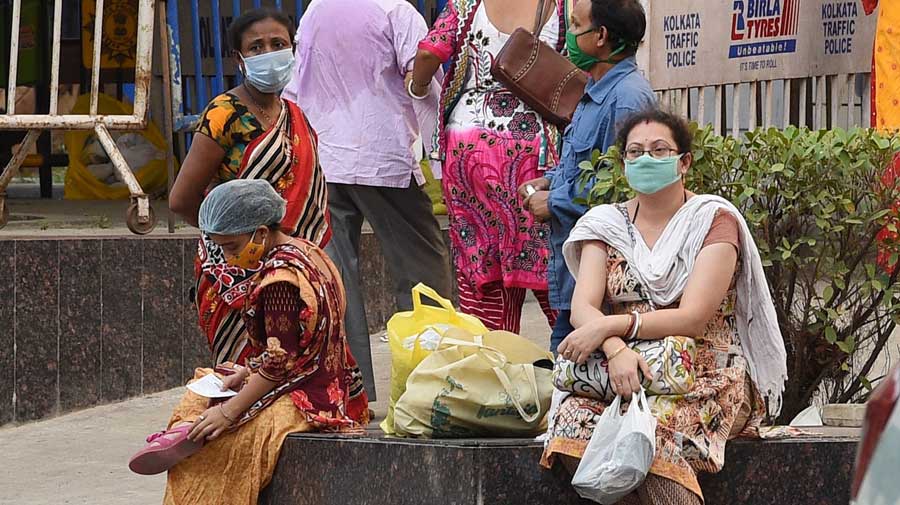 The Union health ministry said all districts where the test positivity — the proportion found Covid-19 positive among those tested — is 10 per cent or higher for a week or where oxygen support of intensive care unit bed occupancy is 60 per cent or higher should consider these measures.

The focus would be on “containment” to flatten the epidemic curve through multiple measures, including night curfews and a ban on social, political, sports, entertainment, academic, cultural, religious, or other similar gatherings and congregations.

Essential services, including healthcare, police, fire, banks, electricity, water, and sanitation, and public transport needed for these services will continue, the government said in a statement released on Sunday night.

Government and private offices would need to operate at a maximum staff strength of 50 per cent in these districts. All industrial and science establishments may continue to run but the workforce would be expected to maintain physical distancing.

The advisory is in line with recommendations from a panel of medical experts that had earlier this month said decisions on local lockdowns to be taken on the basis of trends in transmission, hospital occupancy, and mortality rates.

The Lancet India Commission Covid-19 India Task Force panel had said that it does not recommend a national lockdown or even state lockdowns, but India should consider a “middle ground approach” focused on local actions to break infection transmission chains.

Several states, including Delhi, Maharashtra, and Uttar Pradesh, have implemented some or all of these restrictions. An analysis by the health ministry a week ago had counted 146 districts across India where the test positivity was more than 15 per cent and would thus qualify for intensive actions.

Public health experts have said strong and effective measures to break infection transmission chains would be required wherever the healthcare system is overwhelmed by patients and is facing shortages of hospital beds, oxygen or healthcare staff.

“Some of our own doctors and nurses are positive and under isolation – we’re working with fewer staff but more patients,” said a senior doctor in a central government hospital in New Delhi. “Something has to be done as quickly as possible to curb the infection spread.”

New Delhi: Hindustani classical vocalist Pandit Rajan Mishra, a Padma Bhushan awardee, died of Covid-19 at a hospital on Sunday after his family tried in vain to get him ventilator support.

“We were trying for a ventilator but nobody supported us, nothing in any hospital. Later, the Prime Minister's Office reached out to help but he had left us by then,” his son Rajnish
said.

Prime Minister Narendra Modi condoled the death but did not mention that Mishra had died waiting for ventilator support. PTI

Covid: Where are doses, ask states