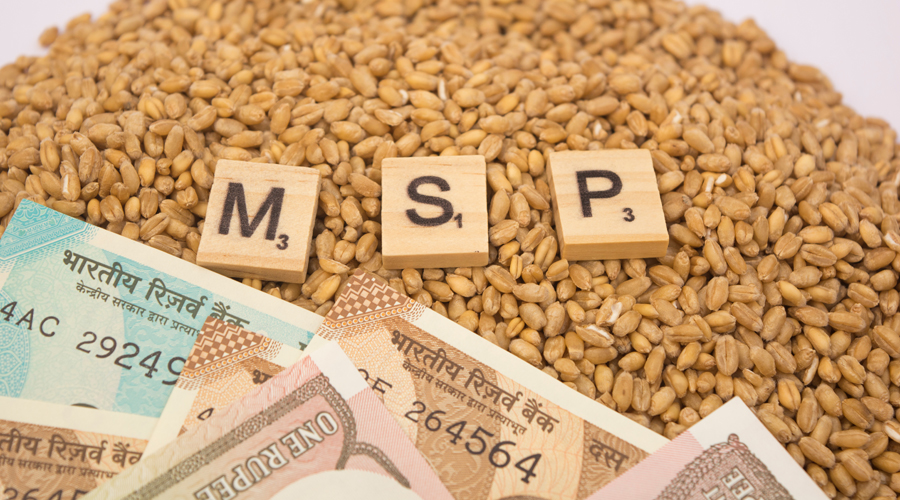 The government on Tuesday hiked the minimum support price (MSP) of six rabi crops by up to 9 per cent, with Rs 110 per quintal increase for the wheat crop to boost domestic production and farmers' income.

Wheat MSP has been raised by 5.45 per cent to Rs 2,125 per quintal from Rs 2,015 per quintal to encourage more area under the crop amid tight government stock position owing to low procurement, fall in production and higher exports.

The decision to increase the MSP of rabi crops for the 2023-24 marketing year was taken at a meeting of the Cabinet Committee on Economic Affairs (CCEA) chaired by Prime Minister Narendra Modi, Information and Broadcasting Minister Anurag Thakur said in a media briefing.

Whereas in the other four rabi crops, it is between 50 to 85 per cent return over the cost of production, he added.

Asked if the hike in MSP of rabi crops would lead to food inflation, the minister said the price rise in India is under control in comparison to other countries.

The absolute highest increase in MSP has been approved for lentils (Masur) by Rs 500 per quintal, followed by rapeseed and mustard at Rs 400. In percentage terms, the MSP of masur has been enhanced to the maximum at 9.09 per cent.

The MSP is the rate at which the government buys grain from farmers. Currently, the government fixes MSP for 23 crops grown in both kharif and rabi seasons.

Sowing of rabi (winter) crops begins in October, immediately after the harvest of kharif (summer) crops. Wheat and mustard are major rabi crops.

In case of wheat, the government decided to hike the MSP by Rs 110 per quintal as against Rs 40-50 per quintal in the last two years, keeping in mind the need to raise domestic production amid falling government stocks.

With prices coming under strain owing to a fall in domestic wheat output and an over 50 per cent fall in government procurement at 19 million tonnes in the 2022-23 marketing year, the government had to ban the overseas sales of the grain in May.

While wheat prices have risen in comparison to the last two years, Food Secretary Sudhanshu Pandey on Monday said the increase in both wholesale and retail wheat prices is not "abnormal" and the government would intervene when required.

In the statement, the government said the increase in MSP for rabi crops for the 2022-23 crop year is in line with the Union Budget 2018-19 announcement of fixing the MSP at a level of at least 1.5 times the all-India weighted average cost of production, aimed at reasonably fair remuneration for the farmers.

Since 2014-15, there has been a renewed focus on increasing the production of oilseeds and pulses. The efforts have yielded good results. The productivity of pulses and oilseeds has increased substantially.

Pulses production has shown a similar increasing trend. The seed minikits programme is a major tool for introducing new varieties of seeds in the farmers' fields and is instrumental in increasing the seed replacement rate, it added.

The government's priority is on increasing the production of oilseeds and pulses to make the country self-reliant and reduce import dependency.

The formulated strategies are to increase production through area expansion, productivity through high-yielding varieties, MSP support and procurement. The government is also promoting the adoption of smart farming methods through the use of technology and innovation in the agriculture sector in the country.

Under the National e-Governance Plan in Agriculture (NeGPA), funding is given to state governments for digital agriculture projects using emerging technologies like Artificial Intelligence and Machine Learning (AI/ML), Internet of Things (IoT) and blockchain.

The adoption of drone technologies is being done. To promote smart farming, the government is also promoting startups in the agriculture sector and nurturing agri-entrepreneurs.