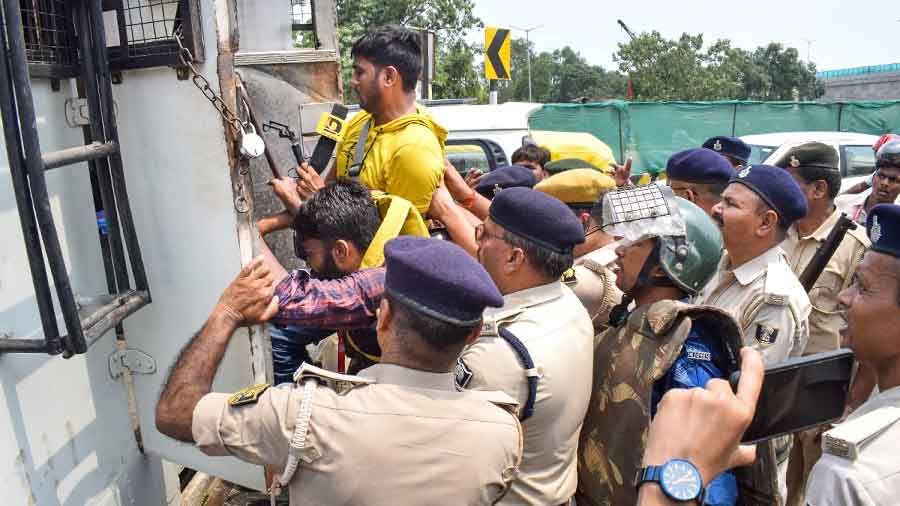 The Centre on Saturday announced several incentives including reserving 10 per cent vacancies in the defence ministry and paramilitary forces for Agnipath retirees as violent protests raged on against the new military recruitment scheme in many states and opposition parties stepped up pressure for its rollback.

Defence Minister Rajnath Singh, however, strongly defended the scheme saying it was brought after wide-ranging consultations and suggested a misunderstanding was being spread for political reasons, while Union Minister Anurag Thakur appealed to the youths to shun violence and come forward for talks, asserting that the government is ready to look into their grievances with an open mind and make changes, if required .

Mobs set ablaze Taregana railway station in Bihar during a bandh on Saturday and vandalised Ludhiana railway station in Punjab, as protesters continued to target railway properties on the fourth day of the stir and blocked roads and rail tracks in several states including West Bengal, Haryana, Rajasthan, Odisha and Uttar Pradesh.

Railways cancelled 369 trains on Saturday and passengers faced a harrowing time. Over 200 trains were cancelled a day earlier after the railways faced the brunt of the protests.

The agitation also spread to the southern states of Tamil Nadu, Karnataka and Kerala, with aspirants doing push-ups on roads at some places to register their protest.

Congress president Sonia Gandhi termed the scheme as "directionless" and said her party will work for its withdrawal while appealing to the youths to adopt peaceful and non-violent means to fight for their demands.

"He will have to accept the demand of the youth of the country by becoming 'maafiveer' and take back the 'Agnipath' scheme," the former Congress chief said.

Punjab Chief Minister Bhagwant Mann demanded a rollback and said those who cleared physical tests in the last two years must get a chance to appear in written exams for joining the Army.

The Aam Aadmi Party (AAP) leader claimed that the Agnipath scheme will "dilute" the fighting ability of soldiers and render the youth jobless.

With the protesting youths alleging that they will be left in a lurch with no retirement benefits after the end of the four-year contract under the scheme, the ministries of home affairs and defence announced concessions and incentives that will assist retirees in their further employment.

The central government indicated that other departments too were working in this direction after several BJP-ruled states like Uttar Pradesh, Haryana, Madhya Pradesh and Assam announced various measures to encourage the youths to apply under the Agnipath scheme and assured them reservation.

Union Information and Broadcasting Minister Anurag Thakur said some political parties, which keep looking for every opportunity under an agenda to block any change taking place, have "provoked" the youths.

He said the government's approach on the issue is that it is ready consider any changes in the interest of the youth and the country.

"I would like to appeal to the country's youth that path of violence would not take you anywhere. ... If you have any better suggestion, you can place your views.... Government is always ready to consider with an open mind," he said and suggested the protesting youths come for talks with the central government.

The Ministry of Home Affairs (MHA) said it has decided to reserve 10 per cent vacancies for recruitment in CAPFs and Assam Rifles for Agniveers.

"The MHA also decides to give 3 years age relaxation beyond the prescribed upper age limit to Agniveers for recruitment in CAPFs & Assam Rifles," the ministry tweeted.

Further, for the first batch of Agniveer, the age relaxation will be for five years beyond the prescribed upper age limit, it said.

At present, jawans between the age of 18-23 years are recruited into the paramilitary forces.

A 10 per cent reservation will be implemented in the Indian Coast Guard and defence civilian posts, and all the 16 Defence Public Sector Undertakings, according to Defence Minister Rajnath Singh's office.

It said this reservation would be in addition to the existing quota for ex-servicemen.

"Defence Public Sector Undertakings will be advised to make similar amendments to their respective recruitment rules. Necessary age relaxation provision will also be made," it said.

The defence minister said the scheme was announced after around two years of deliberations including with the ex-servicemen community and a decision was taken based on a consensus.

"It is bringing revolutionary changes in the recruitment process in the armed forces. Some people are spreading misunderstanding about it. Maybe, there could be some confusion among the people as it is a new scheme," Singh said speaking at the conclave organised by a media group.

Union Minister Hardeep Singh Puri said the PSUs under his housing and petroleum ministries are working on hiring 'Agniveers' and also slammed the Opposition for spreading "misinformation".

Despite the Centre's steps to assuage concerns, there was no let-up in the protests.

In Patna and its outskirts, bandh supporters were restrained by Bihar police from forcing shops to down their shutters, but they hurled stones and set fire to Taregana railway station in Masaurhi sub-division and a jeep belonging to the railway police.

There was also cross-firing and journalists covering the clash were 1assaulted.

In the Danapur sub-division, bandh supporters vandalised an ambulance and the driver alleged that a patient and attendants inside were also beaten up by the mob.

The railways have suffered massive losses in the state during protests in the last three days. More than 60 train coaches, 10 engines and some stations have been torched.

Large-scale violence in the past few days has led to the suspension of internet services, barring the ones controlled by the government, in 12 severely affected districts. A home department notification said the restrictions would remain effective for at least three days.

The Union Home Ministry, meanwhile, accorded a VIP security cover of the CRPF to at least 10 Bihar BJP legislators and leaders including Deputy Chief Minister Renu Devia and state BJP president Sanjay Jaiswal, citing threat to them in the wake of the violent protests.

The bandh eceived in-principle support from all opposition parties RJD, Congress, the Left and AAP.

Chief Minister Nitish Kumar's JD(U), partner of the BJP in the state and the Centre, has also sought a review of the scheme, and urged the Union government to allay the fears of the protesters.

Train services on the Sealdah-Barrackpore route in West Bengal's North 24 Parganas district were disrupted for around one hour on Saturday as a group of anti-Agnipath agitators blocked railway tracks and did push-ups to register their protest.

Kolkata Police clashed with agitating members of the Left-affiliated AIDSO and AIDYO when they tried to block roads in the city's Hazra area, a hundred metres from West Bengal Chief Minister Mamata Banerjee's residence.

Hundreds of youths participated in rallies in Thiruvananthapuram and Kozhikode in Kerala, opposing the Agnipath scheme and demanding the conduct of pending written examination for the army recruitment at the earliest.

The job aspirants, who gathered in huge numbers at Thampanoor in the Kerala capital, marched to Raj Bhavan, the official residence of Governor Arif Mohammed Khan, raising slogans of "We want justice" and holding placards and banners.

In Dharwad, Karnataka, police used mild lathi-charge to disperse anti-Agnipath protesters as they attempted to take out a march.

In Uttar Pradesh, protests were held in Merrut, Jaunpur and Kannauj, with a roadways bus being set afire by protestors. The police have registered cases against 400 unknown persons in connection with the violence in Ballia on Friday.

They said eight police personnel and a driver of a privately-run bus suffered injuries in violence during the protest in Jewar area.

In Haryana's Mahendergarh, which has seen strong protests against the defence recruitment scheme over the past few days, a group of youth set a pick-up van on fire and indulged in vandalism, the police said.

Youths also held a protest in Sonipat and blocked the Rohtak-Panipat highway. In Kaithal, they took out a protest march while protests were also held in Fatehabad and Jind.

Mobile Internet and SMS services have already been suspended in Mahendergarh, Palwal and Ballabhgarh because of the protests.

A group of over 50 youths, who had their faces covered with a cloth, barged inside the Ludhiana railway complex and smashed many glass panes and ticket counters.

Hundreds of youths protested against the Agnipath scheme at various places in Rajasthan including Jaipur, Jodhpur and Jhunjhunu, and blocked the Jaipur-Delhi Highway in Alwar briefly.

In Behror, protesters broke the windowpanes of a bus.

The Centre had on Tuesday unveiled the ambitious Agnipath scheme for the recruitment of youths aged between 17 and a half and 21 in the Army, Navy and the Air Force, largely on a four-year short-term contractual basis.

On Thursday night, it raised the upper age limit for recruitment to 23 years for 2022 as the protests against the new model for enrolment of soldiers into the three services intensified.

Those recruited under the scheme will be known as 'Agniveers'. After the completion of the four-year tenure, 25 per cent of the recruits from each batch will be offered regular service.